Mild weather in November and the first few days of December enticed many birds to linger, but this was followed by a two-week cold snap that froze virtually all the non-flowing water and pushed many lingerers out just before the Christmas Bird Count (CBC) period. The remainder of the winter saw generally average temperatures and snowfall, with a mild spell in mid-February resulting in the early return of Canada Geese, Bald Eagles, and a few other species.

A tally of 500 Snow Geese at Sauder Reservoir near Medicine Hat, AB 2 Dec was high for early winter (fide MSp). A Greater White-fronted Goose near Letellier, MB 4 Dec was also notable (LB). At Winnipeg, MB an active Canada Goose nest with four eggs was found 3 Dec; the eggs were removed the next day to entice the adult to leave (FB). Two Trumpeter Swans at the Roseau River 23 Feb (DB, KR) and two at the Whiteshell River around the same time (IN) provided Manitoba with its first winter records of the species, albeit presumably early spring migrants. A Wood Duck lingered at Moose Jaw, SK until at least 21 Jan; also present there on that date were two Northern Shovelers and a Pied-billed Grebe (RD). An American Black Duck at Winnipeg 20–23 Feb (GB) was a rare winter find, as were six Common Mergansers at Gods River in northern Manitoba 7 Feb (TV).

A White-winged Dove at Fort McMurray, AB 5 Dec was a one-day wonder (CG, ph.); it represented the third record for the province. Sandhill Cranes rarely remain into winter, but one was at Regina, SK 4 Dec (CH, RD). Two Baird’s Sandpipers at Frank Lake 3 Dec (PC, MM) were the first-ever in winter for the region. Similarly, 22 Bonaparte’s Gulls at a pond at the Portage la Prairie Regional Landfill 1 Dec (CC) were new to the Manitoba winter list. Also exceedingly rare in winter was a presumed Franklin’s Gull 18 Dec at Lethbridge, AB (KN). Sharp-shinned Hawk numbers in winter show a steady increase; this season there were 17 reports in Manitoba as well as four sightings of the seasonally rarer Cooper’s Hawk.

A Ferruginous Hawk near Calgary, AB 22 Jan may have wintered in the area (LR, ph.). A Western Screech-Owl at Calgary remained through the period (B&DR, ph.). Although northern owls were generally scarce, Snowy Owls were fairly common in central Alberta and tallies of 11 Northern Pygmy-Owls at the Cochrane Wildlife Reserve CBC 29 Dec (JP) and seven Short-eared Owls south of Regina 13 Jan (JC) were notable. Small concentrations of Great Gray Owls in se. Manitoba in Dec and Jan dispersed or moved on later in the winter. For the second consecutive year a Yellow-bellied Sapsucker wintered at Strathcona, AB (ED). A strong fall showing by Red-bellied Woodpeckers in southern Manitoba continued into the winter with at least 16 birds reported (m.ob.).

A Say’s Phoebe near Lacombe, AB 17–18 Jan was highly unexpected (E.B.F.). A Gray Catbird at Regina, SK 4 Dec had been present for some time (m.ob.). Others were at Rapid City 3 Dec (CE) and Winnipeg, MB the latter bird succumbing to the cold on 9 Dec (JH, m.ob.). Three Brown Thrashers were found in Alberta; individuals at Canmore (ND) and Airdrie (HL) persisted through the winter, while one at Medicine Hat was last seen 9 Dec (MSp). The Eurasian Tree Sparrow first found on the Winnipeg CBC in 2014 was again present (m.ob.). Most winter finches, such as crossbills and Evening Grosbeak, were scarce, but Purple Finch bucked the trend and were tallied in the highest winter numbers ever in southern Manitoba. The Pinawa-Lac du Bonnet CBC alone accounted for 382 birds, more than seven times the previous high tally, and numbers remained high season-long (PT). Similarly, American Goldfinch lingered in high numbers, including 404 tallied on the Glenboro-Spruce Woods CBC 17 Dec (fide LM). Spotted Towhees, very rare in winter, were south of Saskatoon, SK 13 Dec (LS) and at Winnipeg, MB from October until at least 4 Jan (D&KD, m.ob., ph.). A weedy patch south of Winnipeg harboured an assortment of sparrows in early January: up to five American Tree Sparrows, one Song Sparrow, at least five Dark-eyed Juncos and one Harris’s Sparrow (PM, GB, RK, RP). 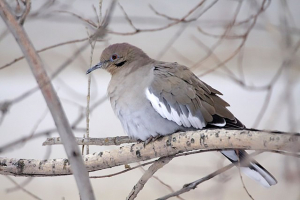 This White-winged Dove was a one-day wonder on 2 Dec 2016 at Fort McMurray in northeastern Alberta. It represented the third record for the province. Photo © Chris Godwin. 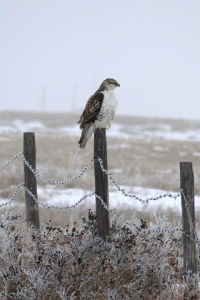 It was likely that this Ferruginous Hawk east of Calgary, Alberta on 22 Jan 2017 had wintered locally. Photo © Laurie Rutter. 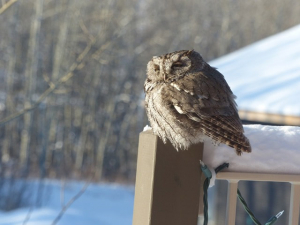 This Western Screech-Owl, photographed here on 19 Feb 2017, had been present at southwest Calgary, Alberta since October 2016. Photo © Diane Ramsey. 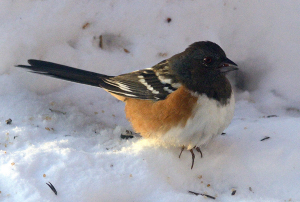 Spotted Towhee is rare in Manitoba at any time of year. This bird was at Winnipeg from fall 2016 into Jan 2017 (here 4 Jan). Photo © Garry Budyk.