The summer of 2022 was hot across the Prairie Provinces and very wet, especially in southern Manitoba and southeastern Saskatchewan, continuing a trend started in the spring. Alberta experienced some very destructive storms. Although the shorebird migration at both ends of the season was lacklustre, the copious rains created areas with sheetwater on agricultural fields in southern Manitoba, which attracted a decent number and variety of birds. Visitors to Churchill, Manitoba reported a fine array of rarities, including Brant, Ruddy Duck, Purple Sandpiper, Laughing Gull and Short-billed Gull. In Alberta Calliope and Rufous hummingbirds, Lazuli Buntings and Black-headed Grosbeaks moved into central and northern parts of the province, as was the case in 2021. For the third year in-a-row, Dickcissels were prominent in southeastern Saskatchewan and southern Manitoba.

An out-of-season Greater White-fronted Goose was at Griswold Marsh, MB 29 Jun (Glennis Lewis). A Brant, a rare spring migrant, was seen at Churchill, MB 1 Jun (Amy Wilson, Andrew Brown); likely the same bird was also noted there 4–5 Jun (Churchill Northern Studies Centre birding group, hereafter CNSC, ph.). A Garganey lingered from May to 7 Jun at Tofield, AB (m. ob., ph.). A single Cinnamon Teal was found near Fisher Branch, MB 9–10 Jun (Joanne Smith, m. ob.) and a pair was at Whitewater Lake, MB 27–29 Jun (Rudolf Koes; Liz and Brian Cieszynski, ph.). Another was noted near Saskatoon, SK 10 Jul (Ryan Dudragne). A Ruddy Duck at Churchill 9 and 16 Jun was about the fourth for the area (Eagle-Eye Tours, m. ob. ph.). A Common Poorwill at Grasslands NP, SK 9 Jun was at the eastern edge of its known breeding range in Canada (Vicki St. Germaine, audio). The northwestern limit of the breeding range of Eastern Whip-poor-will reaches barely into central northeast Saskatchewan, where one bird was audio-recorded in the La Ronge area on 12 Jul (Vicki St. Germaine). Black-chinned Hummingbirds appear to be increasing in numbers in Alberta, with reports from Pincher Creek 1 Jun (Cornel van Ryk), Hillcrest Mines 7 Jun (Pat Lucas), and Jasper 10 and 30 Jun (Jacques Bouvier, Christine Trudeau; m. ob., ph.). The latter bird (or birds) was a first for the location.

Several Manitoba observers commented on the scarcity of Yellow Rails, but reasons were mostly unclear. Certainly a lot of former habitat has been lost since being completely clogged by cattails.  Black-necked Stilts continue their expansion north in Alberta and Saskatchewan. In the latter province the species was recorded at Regina, Prince Albert, Gillis Lake Marcelin and Blaine Lake between 5 Jun and 6 Jul, while three adults and two juveniles were at Griswold Marsh in Jun (John Weier, m. ob., ph.). A Pacific Golden-Plover was a nice find at Frank Lake, AB 5 Jul (Diane Stinson, Lara Fitzpatrick, ph.). Although Purple Sandpiper is a regular fall migrant in the Churchill area, sightings in spring are few and far between. One was there 4 Jun (CNSC, ph.). Also at Churchill were its second confirmed Laughing Gull 19 Jun (Olivia Maillet, Andrew Brown, m. ob., ph.) and a Short-billed Gull on the same date (Olivia Maillet, Cam Nikkel, Andrew Brown, m. ob., ph.). Lesser Black-backed Gull has become an annual visitor in increasing numbers to the Prairie Provinces, where up to four were seen at the PR. 227 dump, MB throughout the season (Cal Cuthbert, Rudolf Koes, m. ob., ph.), at Churchill 18 Jun (m. ob., ph.), and near Selkirk, MB 30 Jun (Rudolf Koes). An Arctic Tern summered at Cattleland Feedlot, AB, where the species had been noted during the past few years (m. ob., ph.) and another was at Long Lake PP, AB 7 Jun, a first for the park (m. ob., ph.).

CNSC birders found 400 Red-throated Loons in the Churchill River mouth on 4 Jun, while on 6 Jun they witnessed a spectacular movement of Pacific Loons as 1300 streamed off Hudson Bay into the river mouth. A Single Pacific Loon at Coaldale, AB 6 Jul was out-of-season (Joyce Vermeer, ph.). Double-crested Cormorant had been a vagrant at Churchill until recently, but it has become an almost annual visitor in the past few years. In Jul up to four were seen by many (Bruce Di Labio, m. ob.). There were five reports of Great Egret in Alberta, involving six birds (m. ob, ph.). A Snowy Egret was seen at West Shoal Lake, MB 5 Jun, likely the same bird reported there 25 May (John Weier). While White-faced Ibis continues its range expansion in Alberta, it was scarce elsewhere in the region. There were no notable reports of diurnal raptors, although Red-tailed Hawks were scarce across Manitoba. In Alberta two Western Screech-Owls were audio-recorded near Waterton 7 Jun (Gerry and James Fox) and Eastern Screech-Owls were found at four locations. Burrowing Owls were rare across the region; they are continuing their steady decline, notwithstanding introduction and breeding programs. A Lewis’s Woodpecker was a good find at Waterton 6 Jun (Gerry and James Fox), while Red-headed Woodpeckers appear to be increasing west of their traditional range, with seven records in Alberta and four in Saskatchewan.

Cordilleran Flycatcher has now been found in the extreme southwest corner of Saskatchewan annually since 2020. This year’s records, in the Maple Creek area, span the period from 11 Jun to 29 Jul (m. ob., ph.). Rare at Churchill was an Eastern Kingbird 5 Jul (Bonnie Chartier), as was a Red-eyed Vireo there 19 Jun (m. ob., ph.). “Ghost” Black-billed Magpies have been present in Edmonton, Alberta for years. One was nicely photographed there on 5 Jun 2022 (Diane Campbell). A Sage Thrasher was present at Wildhorse, in extreme southern Alberta, from 13 to 23 Jul (Michelle Schreder, m. ob., ph.). At the same location a Northern Mockingbird was seen 10 Jun (Blake Weis, ph.) and other Alberta records came from Langdon and Jenner (Milan Dabic; Mike Borg, ph.). A Mountain Bluebird near Lac du Bonnet, MB 5 Jul was the first for the area since the 1980s (Peter Taylor). For the third year a Wood Thrush was on territory near Whitemouth Lake, MB (Robert Parsons, m. ob.). A Eurasian Tree Sparrow, the fourth for Saskatchewan, was a one day wonder at Rockglen 17 Jul (Len Ferns, ph.). There were at least four Field Sparrows recorded in Saskatchewan, while a Brewer’s Sparrow was at Weyburn, SK 26 Jun (Sharlane Toole). Much out-of-season was a White-crowned Sparrow at Regina 24 Jun (Ken Feltin, ph.), as was a Harris’s Sparrow at Ft. Whyte Alive, Winnipeg, MB 28 Jul (Paul Fieldhouse).

In most recent years a Garganey has shown up somewhere in the Prairie Provinces. This male, the second reported in 2022, visited Tofield, Alberta on 5 Jun. Photo @ Neil Denton. 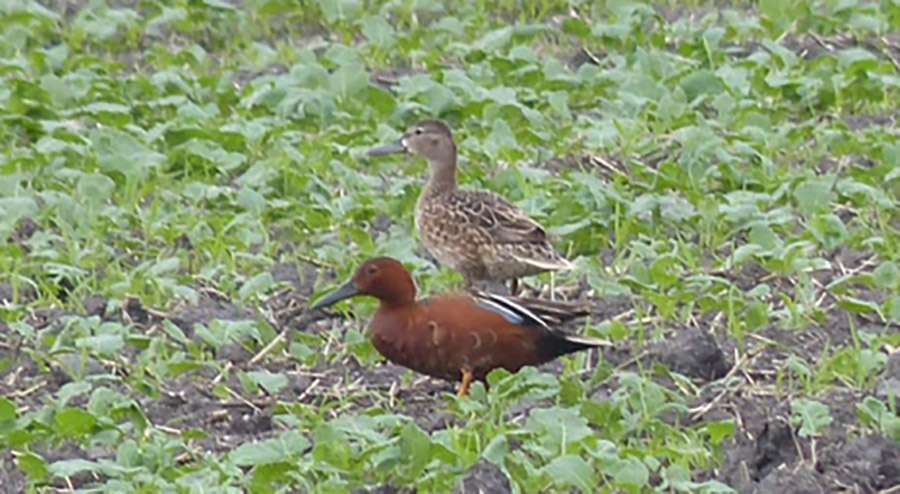 Following the initial find of a male Cinnamon Teal at Whitewater Lake, Manitoba on 27 Jun 2022, this pair was found at the same location on 29 Jun. Photo @ Liz & Brian Cieszynski. 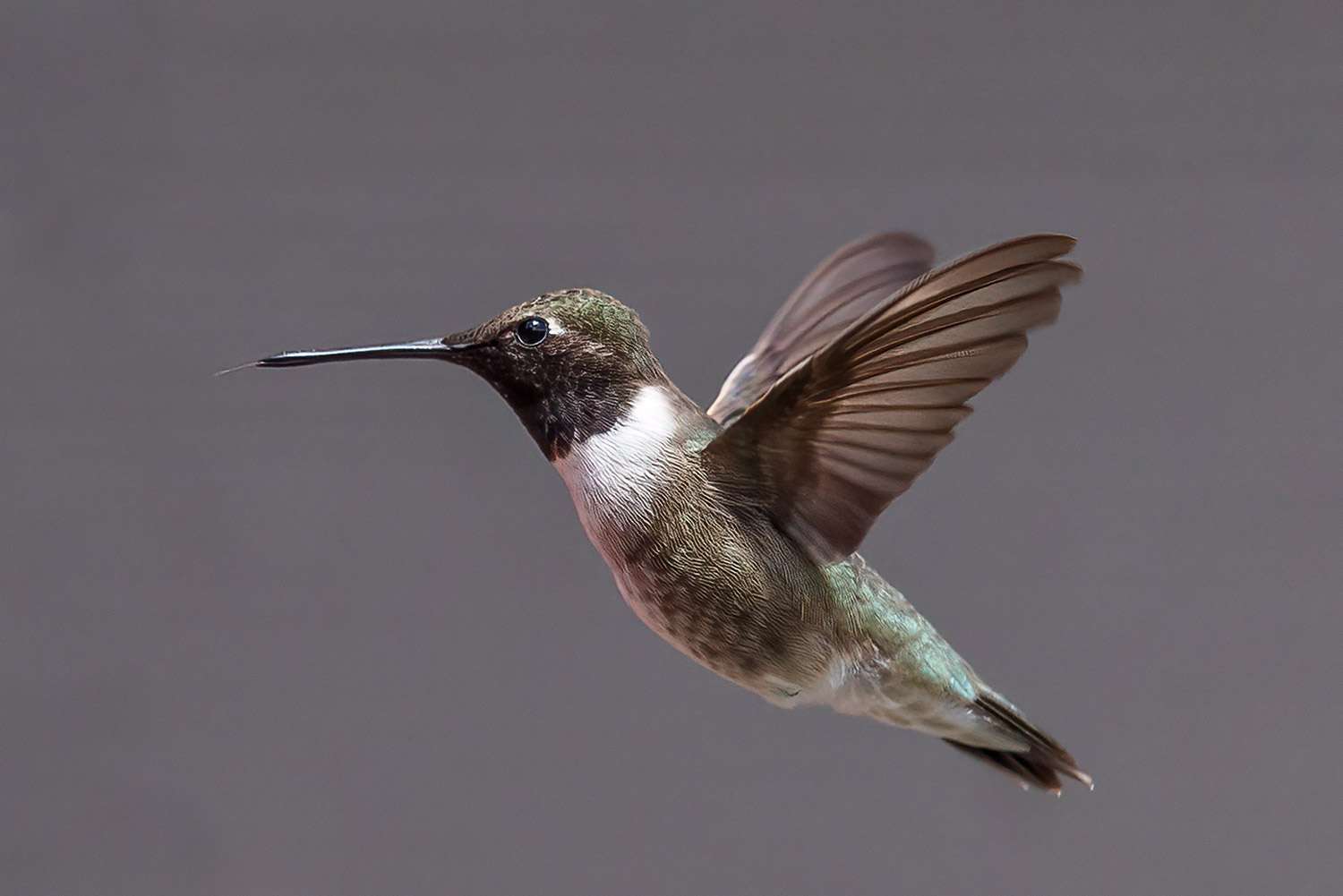 Black-chinned Hummingbird has become an annual visitor to the Alberta portion of the Rocky Mountains. This male was nicely photographed at Jasper on 10 Jun 2022. Photo @ Jacques Bouvier. 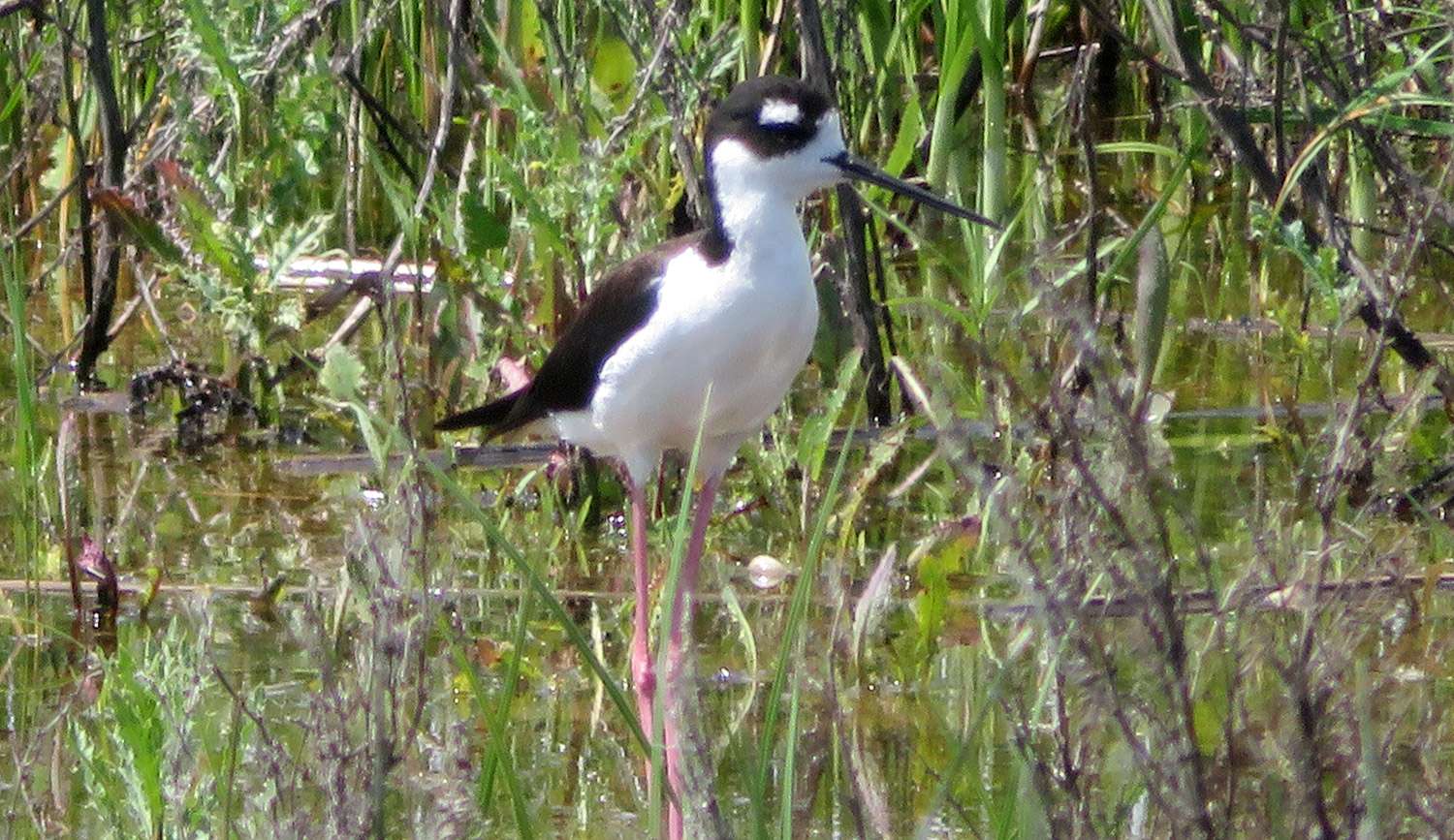 Up to five Black-necked Stilts, including two juveniles, were present at the Griswold Marshes of Manitoba in the summer of 2022. This adult was photographed on 28 Jun. Photo @ Rudolf Koes. 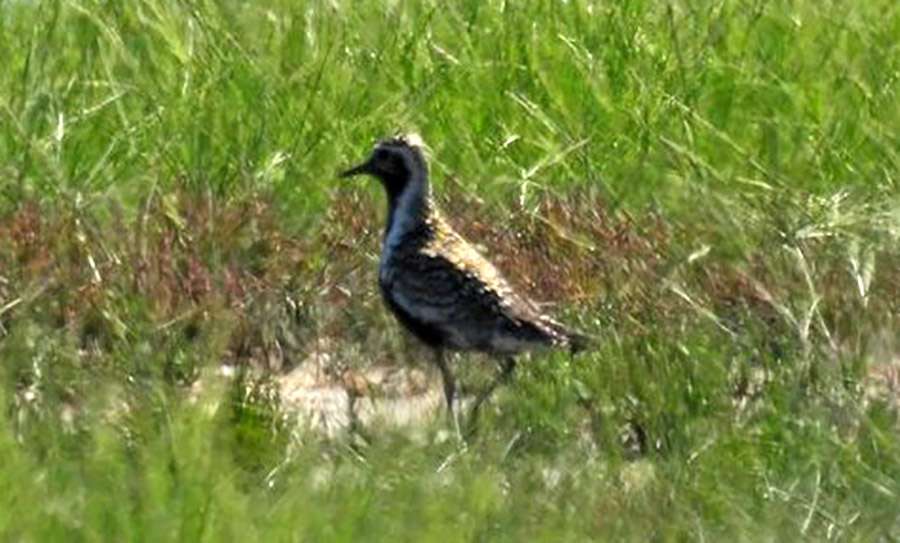 Alberta is the only prairie province with confirmed records of Pacific Golden-Plover. This individual was found at Frank Lake on 5 Jun 2022. Photo @ Diane Stinson. 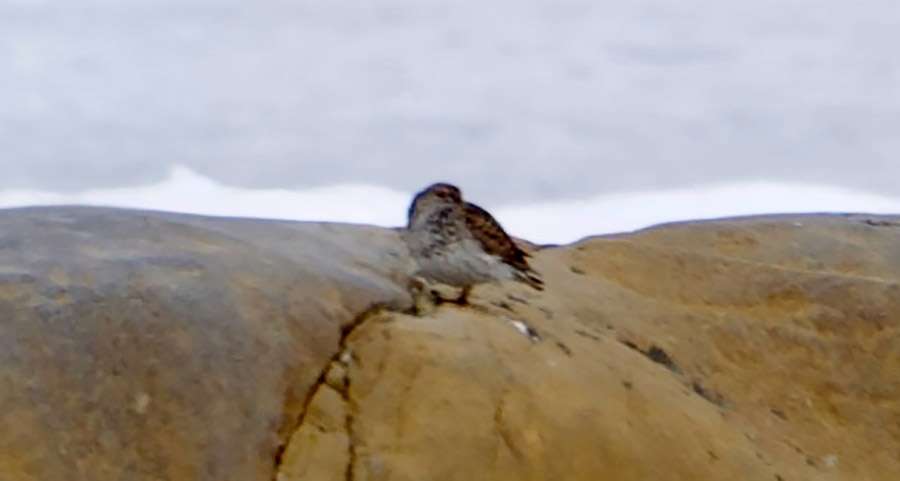 While Purple Sandpipers are frequently seen at Churchill, Manitoba during late fall (Polar Bear season), the species is very rare during spring. This bird briefly perched on ice in the Churchill River mouth on 4 Jun 2022. Photo @ Heather Tulloch Brownell. 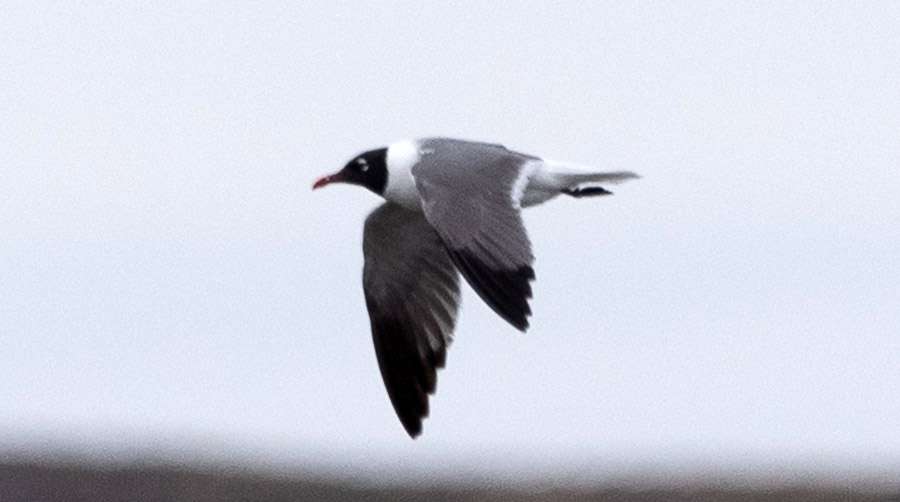 This Laughing Gull was at the Churchill River mouth at Churchill, Manitoba on 19 Jun 2022. It represented the third record for the area and about the tenth for the province. Photo @ Cam Nikkel. 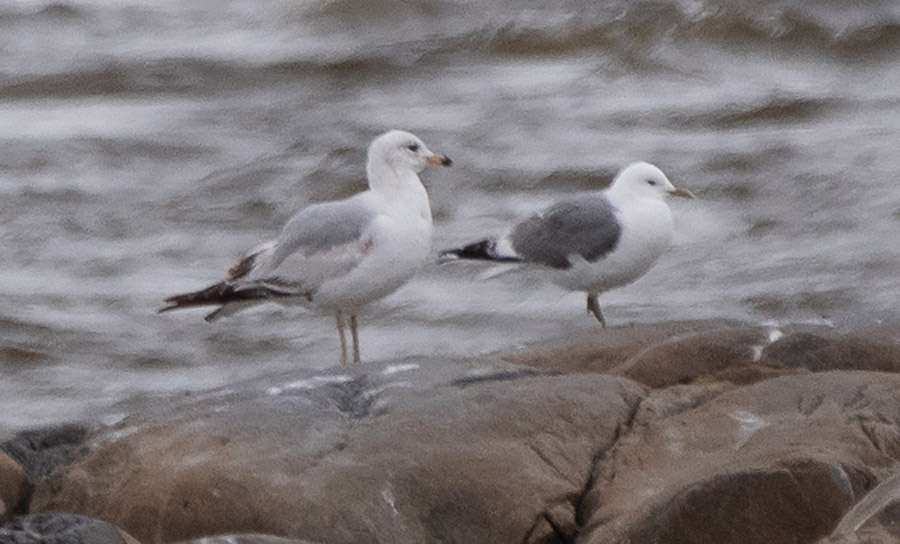 Found on the same day as the Laughing Gull mentioned elsewhere in this report – 19 Jun 2022 – was this Short-billed Gull at Churchill, Manitoba. The species has attempted to breed here in the past, without success, and is still a less-than-annual visitor. Photo @ Cam Nikkel.

For several years in a row at least one Arctic Tern has summered at Cattleland Slough, Alberta, well south of the usual breeding range. Here one is seen on 11 Jun 2022. Photo @ Annie Finch. 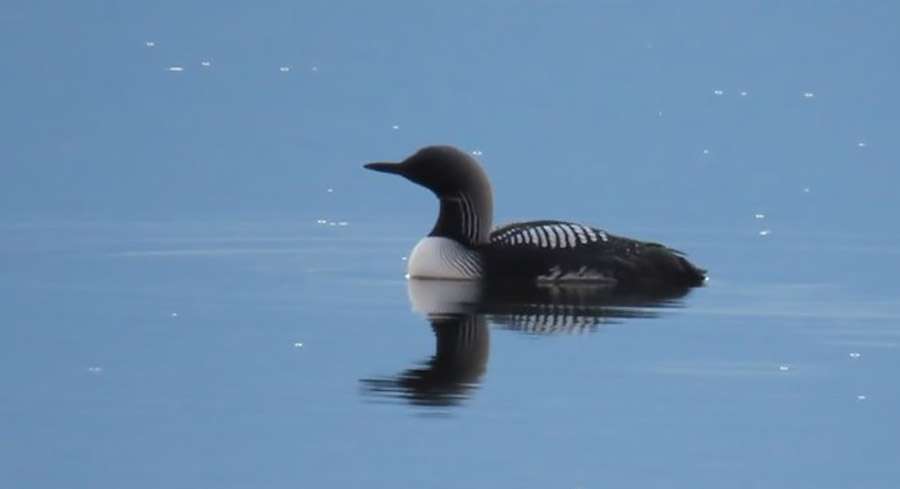 This Pacific Loon at Coaldale, Alberta on 6 Jul 2022 was an unexpected summer visitor. Photo @ David Scott. 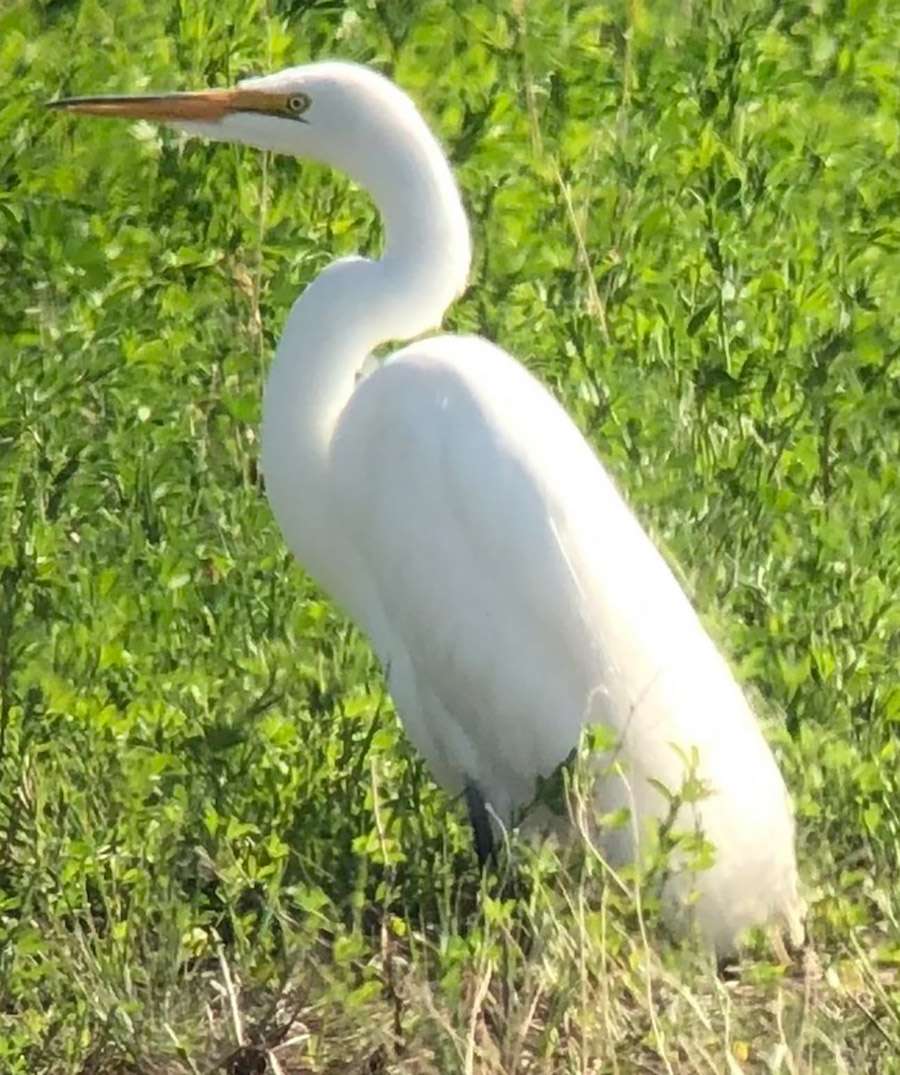 While still rare in Alberta, Great Egrets are now reported annually. This bird was at Morinville on 9 Jun 2022. Photo @ James Fox. 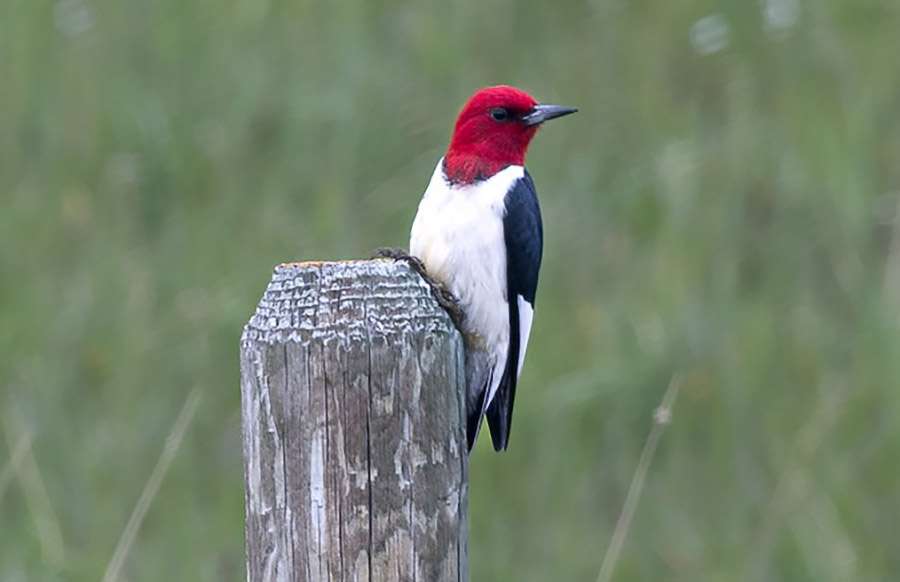 Red-headed Woodpecker is another species that seems to extend its range westward in the Prairie Provinces. This adult was seen in southeast Alberta on 4 Jun 2022. Photo @ Dave Morgan. 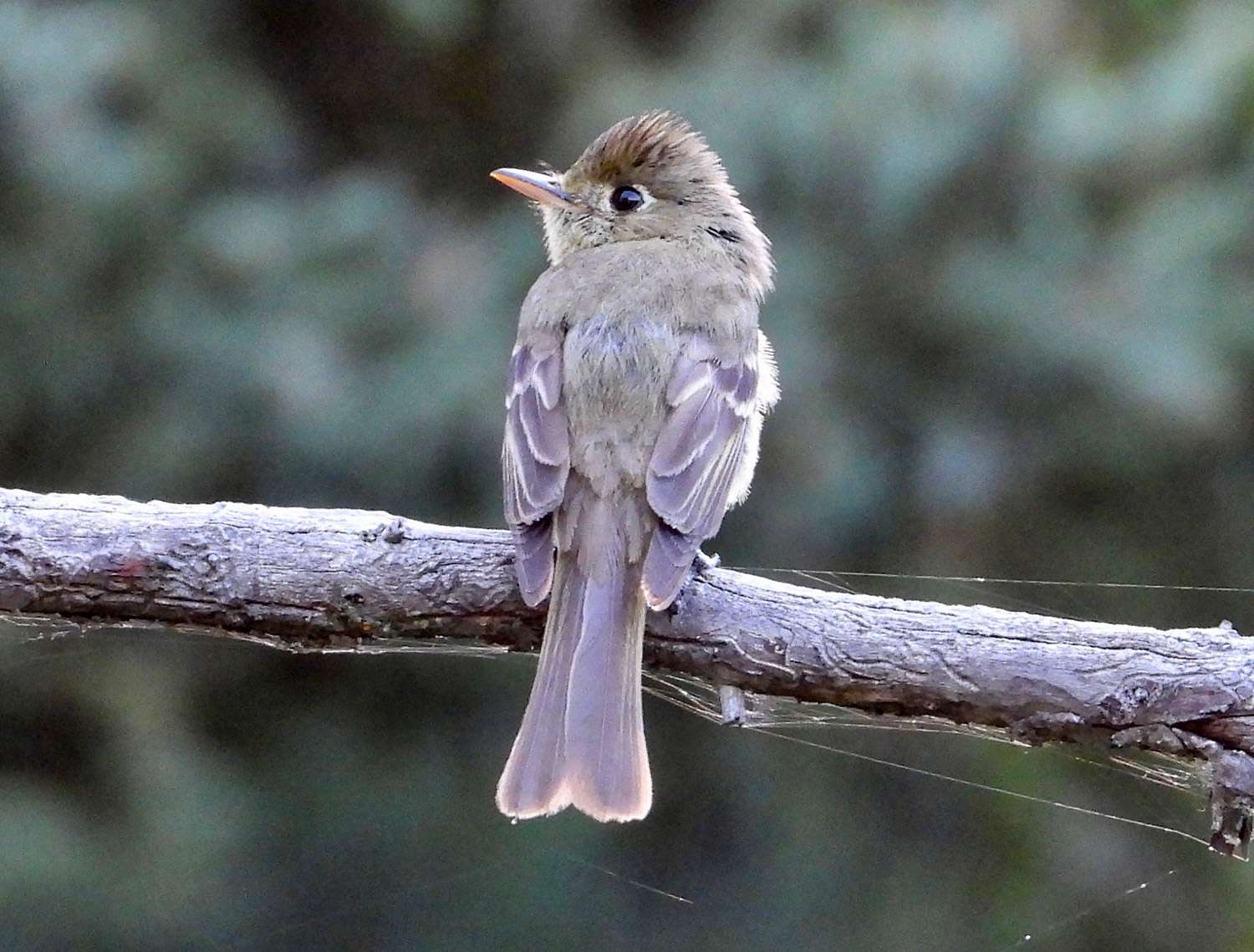 For the third year in a row Cordilleran Flycatcher has been found in extreme southwest Saskatchewan. This bird, seen here on 24 Jul 2022, summered along the West Benson Trail, where it was observed by many. Photo @ John Lundgren. 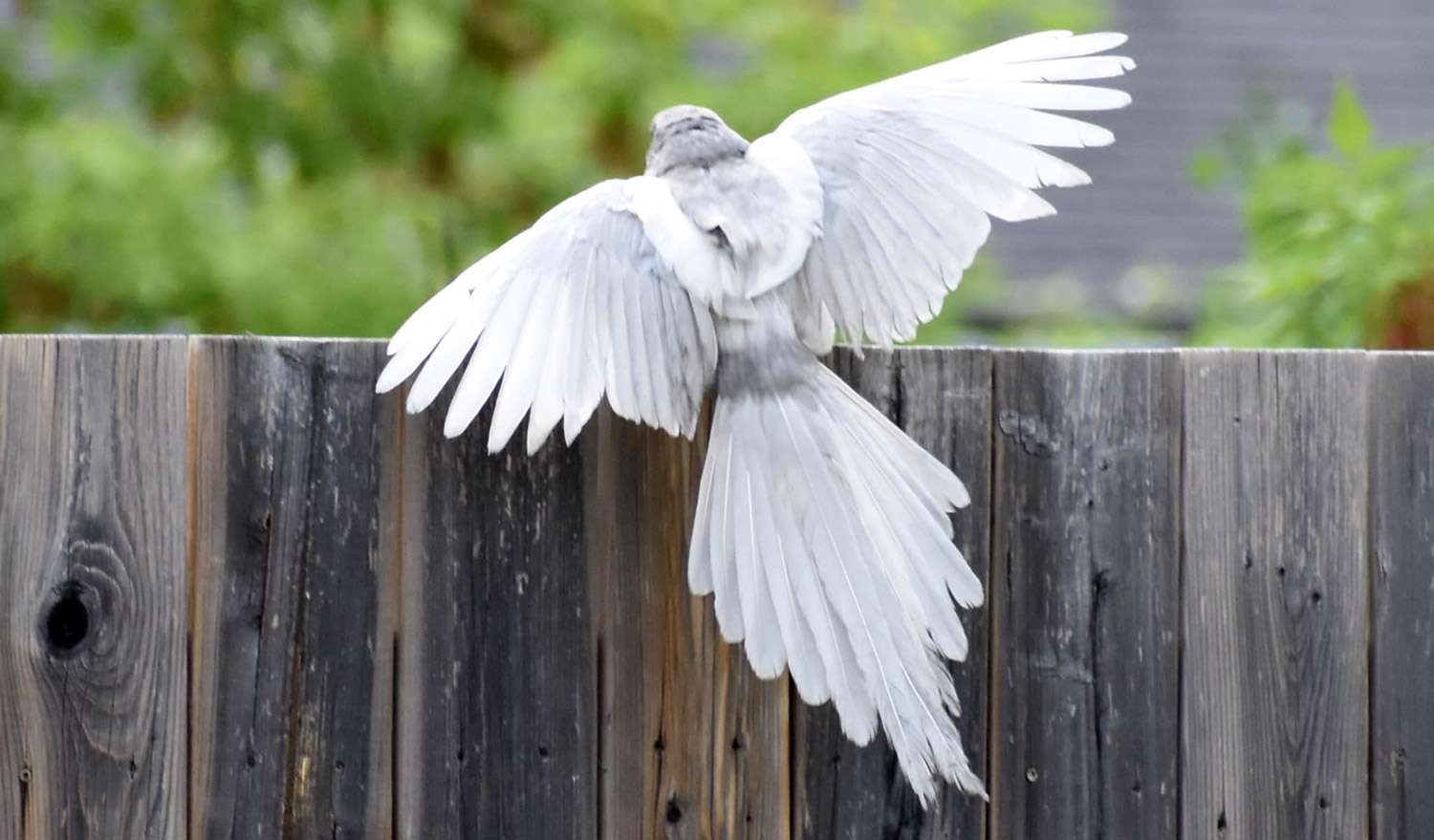 The city of Edmonton, Alberta has hosted a population of so-called “ghost” Black-billed Magpies for years. Genetics experts believe as many as three different mutations are responsible for this aberrant plumage. This bird was photographed on 5 Jun 2022. Photo @ Diane Campbell. 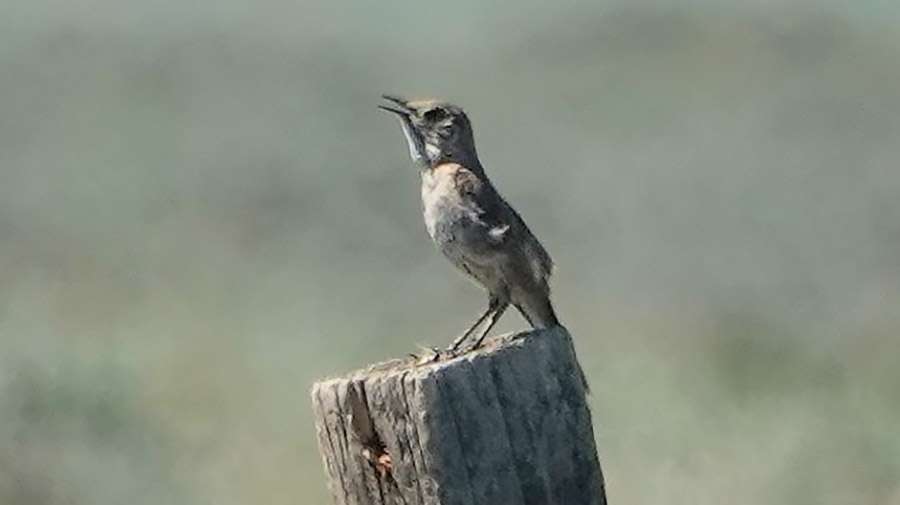 The breeding range of Sage Thrasher in the Prairie Provinces is restricted to the area around the Cypress Hills, which straddle the border of Alberta and Saskatchewan. This bird was at Wildhorse, Alberta 20 Jul 2022. Photo @ Liz Soria. 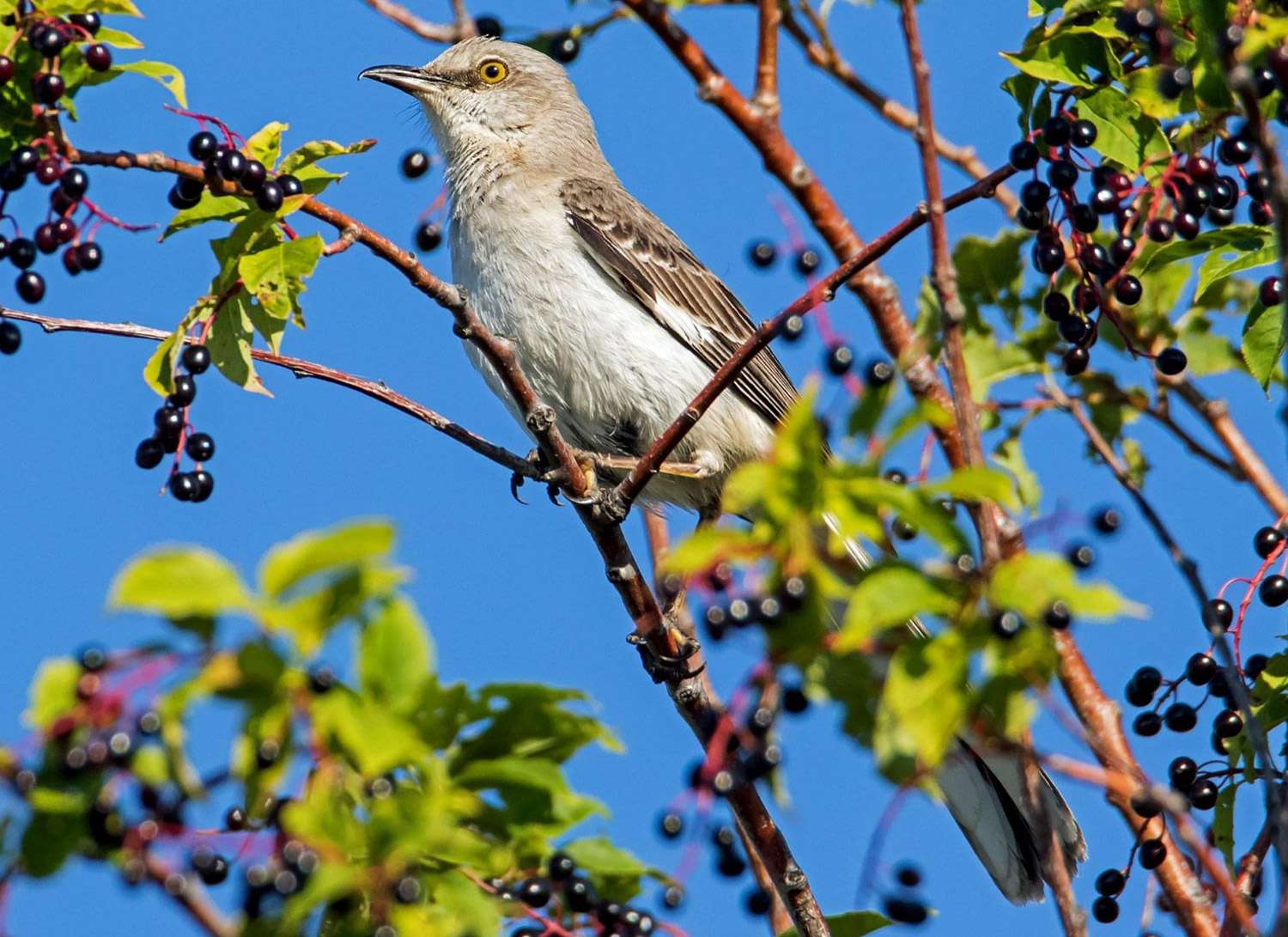 Although Northern Mockingbirds have never managed to gain a solid foothold in the Prairie Provinces, a few show up every year. This individual was at Jenner, Alberta 21 Jul 2022. Photo @ Mike Borle. 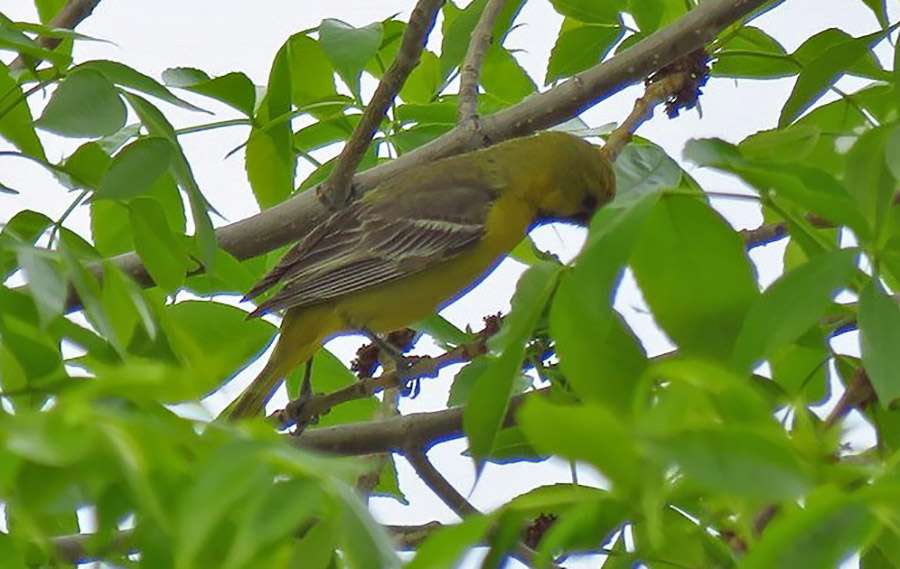 Alberta’s second Orchard Oriole, seen here on 3 Jun 2022 at Lethbridge, followed on the heels of the province’s first record in 2021. Photo @ Ken Orich. 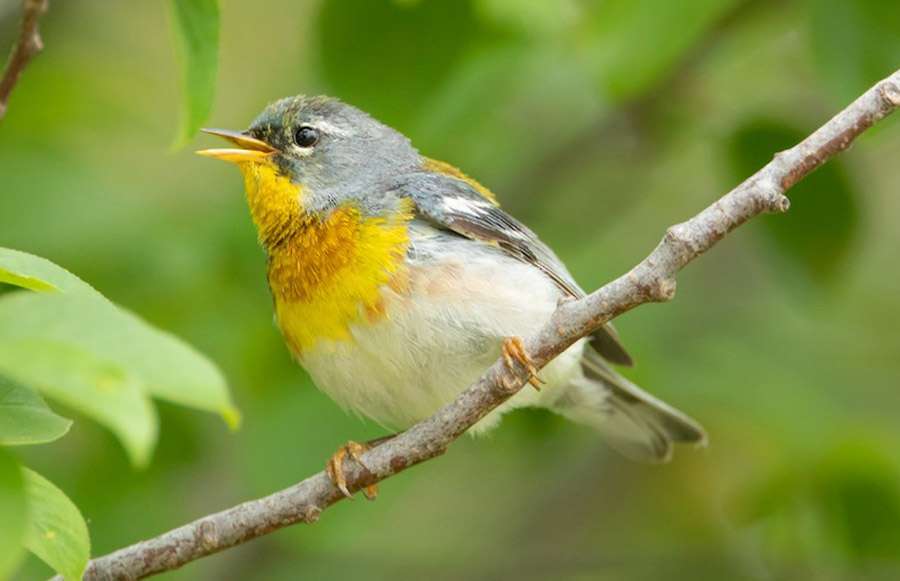 This Northern Parula, at Brooks, Alberta, on 11 Jun 2022, was far west of its range. The nearest breeders are found in southeast Manitoba. Photo @ Liz Soria. 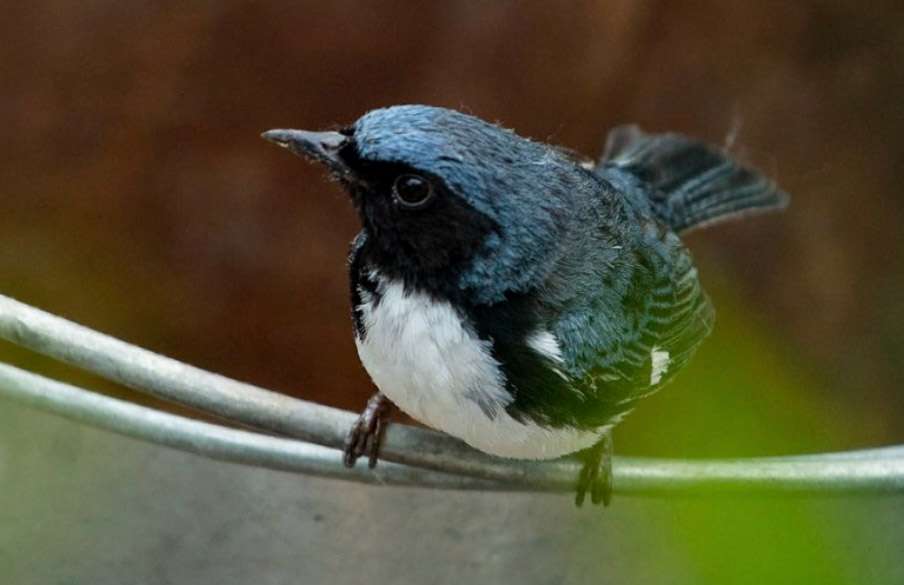 Well west of its breeding range was this Black-throated Blue Warbler at Fort McLeod, Alberta on 3 Jun 2022. Photo @ Liz Saunders. 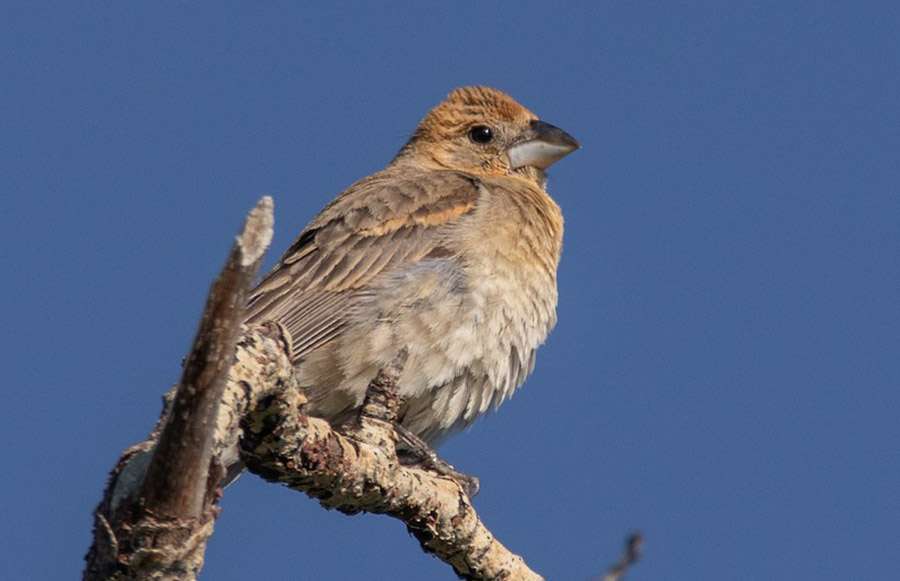