Summer 2021 in the southern prairie provinces was characterized by heat, drought and smoke. The drought conditions ranged from abnormally dry to extreme and exceptional – the highest possible rating – in much of Manitoba, with similar conditions in parts of Alberta and Saskatchewan. It was the driest July on record in southern Manitoba. The heat was unrelenting, and made all the more unbearable by persistent smoke from numerous forest fires in the region and bordering provinces of British Columbia and Ontario. Alberta recorded its longest heat wave ever, with temperatures occasionally peaking above 40°C, even at Jasper up in the Rockies. Travel restrictions due to the drought and the Covid-19 pandemic limited access to large areas of boreal forest in the east and much of northern Saskatchewan and Manitoba, which hampered atlas work and other types of surveys. Most smaller wetlands, marshes and wet meadows were completely dry, reducing both the variety and density of numerous species in those areas. Small streams completely dried up, larger rivers slowed to a trickle and even vast Lake Winnipeg was more than two feet below its normal summer level. Each province hosted exceptional rarities: Curlew Sandpiper, Black Vulture, Crested Caracara, Sagebrush Sparrow and Orchard Oriole in Alberta, White-winged Dove, Western Flycatcher and Yellow-throated Warbler in Saskatchewan, and White-winged Dove, Long-billed Curlew and Curve-billed Thrasher in Manitoba. The region also experienced a major incursion of Dickcissels.

Five Sabine’s Gulls visited Prince Albert NP, SK 4 Jun (ph. Jo Jaarsma), while a single bird was noted at Saskatoon 19 Jun (Ryan Dudragne). A Mew Gull at Crooked Lake 13 and 29 Jun represented what was probably the first summer record for southern Saskatchewan (ph. Don Weidl). Manitoba had two reports of Lesser Black-backed Gull: one at Birch Point 2 Jun (ph. John Weier) and one at the PR 227 dump 23–25 Jun (ph. Jock McCracken) and again 14 Jul (Cal Cuthbert); the latter bird was likely a hold-over from spring. A Least Tern at Calgary 20 Jul was the second for Alberta (ph. Jim Mott, m. ob.). Although not unprecedented in summer, an Arctic Tern at Cattleland Slough, AB through the season was a nice find (ph., m. ob.). A leucistic Great Blue Heron at Tofield, AB 17 Jul 2021 was a striking bird (ph. Loverna Epp). Great Egrets were well-reported, with Alberta sightings at Beaverhill Lake, Mannville, Rochan Sands, Elk Island NP, Calgary and Irricana Sloughs, while in Saskatchewan birds were seen at Big Quill Lake 14 Jun (Wendy Woodard) and 7 Jul (Dale Hjertaas). The species is a regular breeder in Manitoba and generally elicits little comment, but a bird at Akudlik Marsh, Churchill 13 Jun was only the second for this northern region (ph. Russell Turner). A Snowy Egret continued from spring at Pakowki Lake, AB (ph., m. ob.). Cattle Egrets went unreported. A Glossy Ibis x White-faced hybrid was nicely photographed at Beiseker, AB 4 Jun (Dan Spivak, ph. m. ob.). In Manitoba White-faced Ibises were scarce at their usual stronghold of Whitewater Lake, but up to 35 were recorded at Oak Lake 22 Jul (Glennis Lewis, m. ob.) and 31 at Deleau 31 Jul (Robert Parsons, Jo Swartz). A Black Vulture at Fort McKay, AB 22 and 30 Jun was the second for the province (ph. Alex Dayman). There is the possibility that this was a vulture that had escaped from a rehabilitation centre in British Columbia in Jun 2017. Northern Harriers were particularly uncommon in southern Manitoba, no doubt due to the drought. This summer saw Alberta’s fourth record of Western Screech-Owl, at a different location than the third record in spring 2021. The pair successfully raised two young, providing the first confirmed breeding for the province. Eastern Screech-Owls continued at two of the three undisclosed locations in southern Alberta reported earlier (fide James Fox). A Snowy Owl was a very rare summer bird at Last Mountain Lake NWR, SK 13 Jul (ph. Mike Salazar). Burrowing Owl reports across the southern prairie provinces continued below average, perhaps partly due to a low vole population. In Alberta, Red-headed Woodpeckers at Cypress Hills PP 17 Jun (Brendan Graham, ph. m. ob.) and Rolling Hills 23–26 Jun (ph., m. ob.) were provincial rarities; another was photographed in the Moose Jaw area, SK on 14 Jun (Dan Zazelenchuk). Alberta’s fourth Crested Caracara was at Ft McMurray 21 Jun (ph. Rheal Oullette). Note that three of the four records came from the far northeast of the province.

For the second consecutive year a Western Flycatcher, reported as Cordilleran, was found along Battle Creek Road near Cypress Hills PP, where it was audio-recorded on 14 Jun (Blake Weis); it was also photographed there on 25 Jul. A Curve-billed Thrasher at Churchill 28 Jun was a first for northern Manitoba and only the third overall in the province (ph. Judy Sinclair). Three Sage Thrashers at Wildhorse, AB 19–26 Jul were seen by many (ph., m. ob.). Northern Mockingbirds were reported near Elma, MB 13 Jun (ph. Ron Wiebe), at Dauphin, MB 16 Jun (Randy Bossuyt) and Valleyview, AB 2 Jul (ph. Mannfred Boehm). Eastern and Mountain bluebirds were unusually scarce in Manitoba. A Wood Thrush, first reported late May 2021 along the Whitemouth Lake Road in southeastern Manitoba, was present until at least 26 Jun (m. ob.). A Sprague’s Pipit near Camper, MB 7 Jun was well northeast of its recent breeding range in the province (Garry Budyk). A Snow Bunting at Oak Hammock Marsh WMA, MB 7 Jun was exceptionally late (ph. Red Clarke); presumably the same bird was seen again on 11 Jun (Josiah van Egmond). A Field Sparrow at Grasslands NP, SK 8 Jun was locally rare (ph. Vicki St Germaine). Very much out-of-season was a Fox Sparrow at Camp Morton, MB 6 Jul (ph. Bill Maciejko). A Sagebrush Sparrow at Benchlands 12 Jun was the second for Alberta and the region (ph. George Halmanza). Like several other species associated with wet grasslands, Le Conte’s Sparrow was virtually absent in Manitoba. Dozens of Baird’s Sparrows spent the summer east of Edmonton, AB, undoubtedly displaced from their more southerly normal haunts by the drought. This was unprecedented for the area. A Yellow-breasted Chat at Saskatoon 24 Jun was somewhat north of its breeding range (Nick Saunders).

An Eastern Meadowlark was present in the Vassar, MB area between 3 Jun (ph. Dennis Fast) and 4 Jul (Janna Tweed). An Orchard Oriole at Claresholm 1 Jun was apparently the first for Alberta (ph. Jeanne Burnham). The western limit of this oriole’s breeding range barely reaches into extreme southeast Saskatchewan. A Townsend’s Warbler at Estevan, SK 2 Jun was east of its breeding range (ph. Laurie Koepke). A Yellow-throated Warbler at Regina, about the sixth for Saskatchewan, was seen and photographed by several observers on 2 Jun, the only day of its stay (ph. Jared Clarke, m. ob.). Lazuli Bunting seems to have established itself in small numbers in southern Manitoba. In summer 2021 reports came from Lyleton, Pilot Mound and Winnipeg, while a hybrid Lazuli Bunting x Indigo Bunting was at Winnipeg 24 Jun (Wally Jansen). In Saskatchewan a Lazuli Bunting was found in the Estevan area 11 Jul (ph. Vicki St Germaine). After last summer’s incursion of Dickcissels into southern Manitoba, summer of 2021 saw an even greater and more widespread influx. Birds were reported throughout southern Manitoba from 7 Jun on (Peter Taylor), with the largest tally of 10 birds coming from Tolstoi 27 Jun (Rob & Mel Falk). Saskatchewan had its first of the year on 3 Jun at Vanscoy (ph. Joseph Stookey), while peak numbers in the province centred around the Estevan area. Between 9 and 11 Jul at least 75 were tallied there (Vicki St Germaine, Kathy Hedegard et al.). At least two reports came from Alberta, with sightings at Sorenson Lake 6 Jun (ph. Mike Russum) and Pincher Creek 20 Jun (ph. Asher Warkentin, m. ob.). As is frequently the case, most breeding attempts were doomed as hayfields were cut before the birds could successfully raise young. 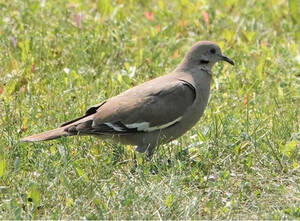 White-winged Doves have shown up in the prairie provinces with some regularity in the past few decades. This bird lingered at Ponemah, Manitoba from 13 (here) to 22 Jul 2021. Photo © Dries Desender. 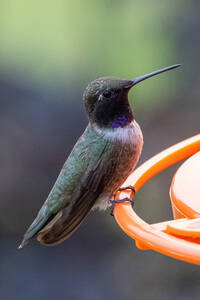 Adding to the recent records of Black-chinned Hummingbird is Alberta was this male at a feeder at Hillcrest Mines, seen here on 24 Jul 2021. Photo © Pat Lucas. 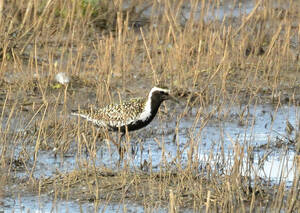 This Pacific Golden-Plover was a good find at Grande Prairie, Alberta, where it remained 3-6 (here) Jun 2021. It allowed many birders viewing oportunites. There are two sight records of this plover in Saskatchewan and none in Manitoba. Photo © Gerry Fox. 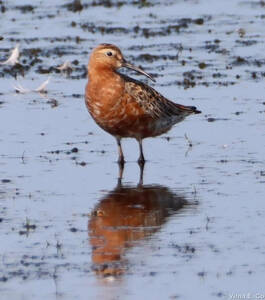 This Curlew Sandpiper at Wetaskiwin, Alberta on 10 Jul 2021 was the rarest shorebird of the season for the prairie provinces. It provided the region with about its 10th record, including several unconfirmed ones. Photo © Virna Espejo Cooper. 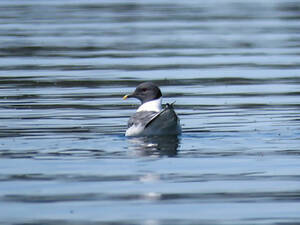 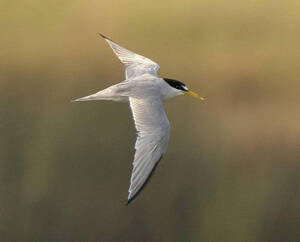 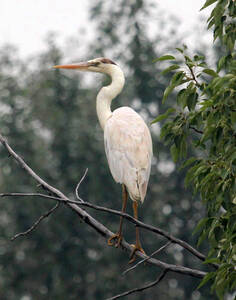 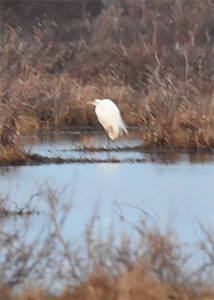 Few rarities were reported at Churchill during the summer of 2021—birders were mostly absent due to the Covid pandemic—but this Great Egret at nearby Akudlik Marsh on 13 Jun was an exception. Photo © Russell Turner. 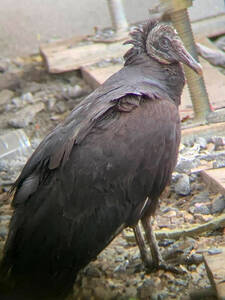 This Black Vulture was photographed at Fort McKay in northeastern Alberta on 30 Jun 2021; it was first seen there on 22 Jun. Photo © Alex Dayman. 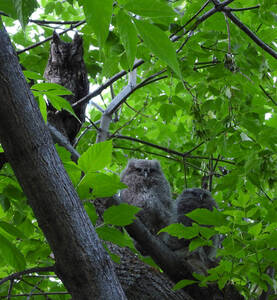 There have been a number of recent sightings of both Eastern and Western screech-owls in southern Alberta. Exact locations are usually kept secret, as was the case here with this adult Western Screech-Owl with fledglings during the summer of 2021. Photo © Evan W. 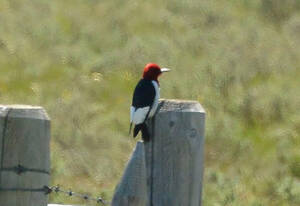 Red-headed Woodpeckers appear to be expanding their range northwest into Alberta, as frequent recent sightings attest. This bird was recorded from Cypress Hills PP on 17 Jun 2021. Photo © Gerry Fox. 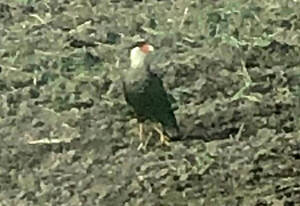 Although the quality of this photograph is not the greatest, the identity of this Crested Caracara at Fort McMurray in northeastern Alberta on 21 Jun 2021 is nevertheless not in doubt. It provided the province with its 4th record. Photo © Rheal Oullette. 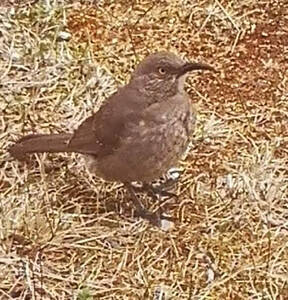 The town of Churchill, Manitoba, located at the western coast of Hudson Bay, has attracted more than its fair share of unexpected rarities over the years. One of these was this Curve-billed Thrasher on 28 Jun 2021, found by a local resident in her yard. Photo © Judy Sinclair. 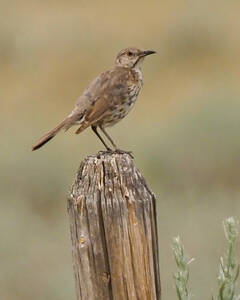 The breeding range of Sage Thrasher barely reaches the extreme southeast of Alberta, where this bird was one of three seen at Wildhorse near the Montana border in mid-Jul (here 19 Jul) 2021. Photo © Brian Elder. 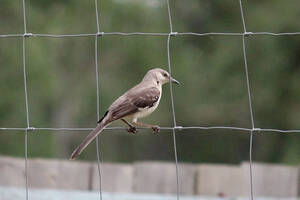 Northern Mockingbird is a rare, but regular, visitor to the prairie provinces. This bird was at Valleyview, Alberta on 2 Jul 2021. Photo © Mannfred Boehm. 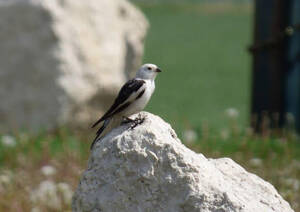 This very tardy Snow Bunting at Oak Hammock Marsh, Manitoba on 7 Jun 2021 was about a month later than the usual departure date. What was presumably the same bird was seen again on 11 Jun. Photo © Red Clarke. 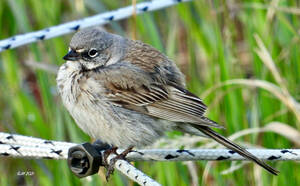 This second record of Sagebrush Sparrow for Alberta and the region was at Benchlands on 12 (here)–13 Jun 2021. Photo © George Halmanza. 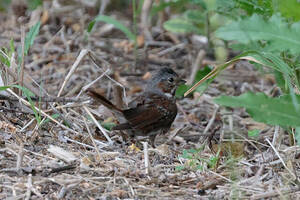 This Fox Sparrow at Camp Morton, Manitoba on 6 Jul 2021 represented one of very few summer records of this species in the southern prairie provinces. Photo © Bill Maciejko. 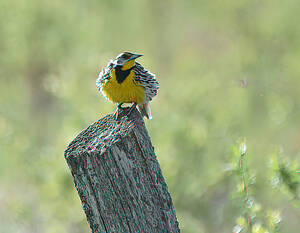 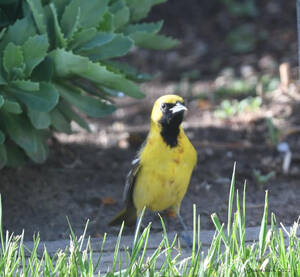 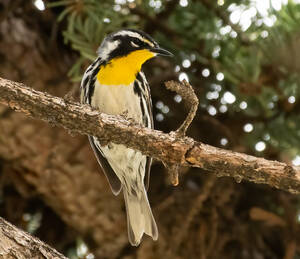 A few observers were lucky enough to this Yellow-throated Warbler on 2 Jun 2021, during its one-day stay at Regina, Saskatchewan. Photo © Annie McLeod. 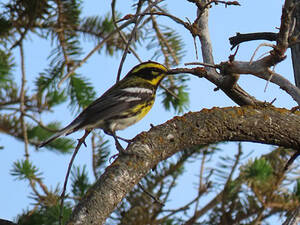 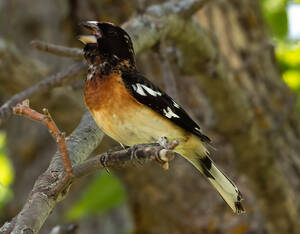 The ranges of Rose-breasted Grosbeak and Black-headed Grosbeak overlap in Saskatchewan, resulting in the occasional hybrid, such as this male at Roche Percé 12 Jun 2021. Photo © Annie McLeod. 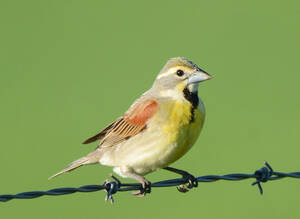 During the summer of 2021 there was a sizeable incursion of Dickcissels into the prairie provinces. This bird at Pincher Creek, Alberta 20 Jun provided the most westerly record. Photo © Asher Warkentin.

Thank you for the well written summary of the year’s bird finds. Very interesting!

You’re welcome Brian. This is just June & July of this year. Some of the photos you gave us permission to use are included in past reports.