March weather in southern Manitoba was variable, while April was rather cold and windy. May had a brief cold spell during its second week, with record lows, followed by a warm spell. Similar conditions existed in the other Prairie Provinces. Numerous rarities were reported.

A gathering of 1300 Greater White-fronted Geese at the Kaleida Marshes on 23 Apr was the largest congregation ever reported in Manitoba (RK). A Tundra Bean-Goose, first recorded at Wascana Lake, Regina, SK in December 2019 and seen intermittently afterwards, was last reported on 27 Mar (ph., m. ob.). Male Eurasian Wigeon records came from Saskatoon, SK 27 Apr (ph. CS) and Delta, MB 21–22 May (JV, m. ob.)., while a hybrid American Wigeon x Eurasian Wigeon was nicely photographed near Maple Creek, SK 31 May (VS) Two different male wigeon hybrids were at Calgary, AB 22 Mar (ph. MS) and 25 Apr (ph. GM). A Tufted Duck lingering at Calgary 23–29 Apr, seen by many, was the second for the province (ph. MB & FB, m. ob.). A female Barrow’s Goldeneye was a rarity at Pinawa, MB 6 Apr (PT). A Sharp-tailed Grouse in the West Kildonan neighbourhood of Winnipeg, MB on 31 Mar was highly unexpected (RK). A Eurasian Collared-Dove photographed at The Pas, MB mid-May was the farthest north the species had been recorded in the province (fide DR). Although Vaux’s Swifts are fairly frequently reported in the southern Alberta Rocky Mountains, especially at Waterton NP, they are rarely photographed, as were three birds at Exshaw 21 May (ph. ND).

Two Whooping Cranes were found at Whitewater Lake, MB 21 Apr (ph. DB, TC), while on 29 Apr a Black-necked Stilt was photographed at the same location (fide CA) and a Piping Plover was found there on 15 May (ph. GB, RK, JW), followed by a Red Phalarope 21 May (ph. GR). Participants in a weed pull (to maintain potential nesting habitat for Piping Plovers) at Sandy Bar IBA, MB 23 May were treated to a Parasitic Jaeger flyby (ph., MK, EM, TR). A Little Gull at Hastings Lake, AB 18–20 May was a good find (VC, GR). Alberta recorded its first Western Gull when a bird was found at Grande Prairie 5 May (Joan Kerr, ph. Sylvain Bourdages). Lesser Black-backed Gulls have become annual visitors to the southern Prairie Provinces. This spring birds were at the PR. 227 dump, MB, a traditional location, on 5 May (ph. CC) and at Winkler, MB 8 May (CW). A Great Black-backed Gull was found at a Regina dump 8 Apr (ph. SO). An Arctic Tern was at Hastings Lake 19–25 May (VC, GR) and another visited Cattleland Slough, AB 29 May (AH). Red-throated Loons occasionally stop over in southern Manitoba during spring migration, especially after late spring breakups, but 180 provided an exceptional peak at Hecla 29 Apr, with birds present from 28 April to 11 May (BS, m. ob.). Crescent Lake in Portage la Prairie, MB hosted a Snowy Egret 28 Apr–4 May (ph. JB, m. ob.); another was at the Saskatoon weir 21 May (SS), while a Cattle Egret was east of Pincher Creek, AB 31 May (AW). Golden Eagles were uncommon migrants at Winnipeg 6 and 7 Mar (BG; RS). Great Gray Owls at Winnipeg 20 Apr (RS) and at Oakland, MB from late Apr to 7 May (CC) were far from their usual haunts. Lewis’s Woodpeckers were prominent in Alberta, with sightings at Canmore, Calgary, Taber, Sundre, Payne Lake and Banff between 30 Apr and 24 May (ph., m. ob.). Red-breasted Sapsuckers were noted at Red Deer, AB 26 Apr (ph. DP) and at Lethbridge, AB 29 Apr (ph. LP). A Crested Caracara at Garden River in extreme northern Alberta 11 May provided the third record for the province and appeared to be the farthest-north record for the species (ph., fide JF).

A Least Flycatcher at Winkler 29 Apr was one of Manitoba’s earliest-ever (BG). In Alberta Western Bluebirds at Beaver Mines 9 Mar (ph. IG), Canmore 23 Apr (ph. JSt) and Banff 26 Apr (ph. LS) were at the eastern edge of their breeding range. Townsend’s Solitaires were noted at Regina, Brandon, MB and two locations in Winnipeg. An above-average number of Wood Thrushes was reported in Manitoba: two at Winnipeg 23 Apr (CM, AJ, ph. CM), one east of Whitemouth Lake 28-31 May (RPa, m. ob.), one at Winnipeg 29 May (LP) and one at Spruce Siding Road 31 May (RK,PT). The latter area hosted a Yellow Rail, a Least Bittern and a Golden-winged Warbler (all scarce species in the province) on the same date, leading Peter Taylor to dub that stretch of road the “Golden Mile”. One Wood Thrush was audio-recorded at Saskatoon 21 May (NS). North of its limited range in extreme southern Alberta was a Sage Thrasher at Cochrane 29 Apr (ph. MH).

A Lesser Goldfinch at Ravine Ecological Preserve, Yorkton 30 Apr was Saskatchewan’s first-ever (ph. RH). A Green-tailed Towhee at Cremona, AB 22–24 May was the second for 2020; there are fewer than ten records overall for the province (ph. SD). A Great-tailed Grackle, seen by many at Calgary 11–16 May, was Alberta’s second-ever (ph. MR, m. ob.). Manitoba hosted a trio of rare warblers, starting with a Worm-eating Warbler, the province’s second confirmed bird, enjoyed by many at Winnipeg 27–30 Apr (Jan Bradley, m. ob., ph.), its fifth Yellow-throated Warbler, at Victoria Beach 2 May (ph. KA, LA), followed by a MacGillivray’s Warbler at St. Jean-Baptiste 15 May, another second province record (ph. JSn). A Hooded Warbler at Regina 24 May was at least the seventh for Saskatchewan (ph. AM). A Northern Parula at Lethbridge 29 May was far west of its usual range (ph. TD). An immature male Summer Tanager at Winnipeg 2–7 May attracted many birders (ph. PR, m. ob.); another was at FtWhyte Alive, Winnipeg 23 May (RPo). Western Tanagers were reported at Winnipeg 2 May (fide GB) and at Stonewall, MB 17 May (ph. KM). About 15 Snow Buntings at Delta 21 May were late migrants (JV). There were two Indigo Bunting reports from Alberta: one at Beaver Mines 23 May (ph. PL) and one at Rocky Mountain House 31 May (ph. SH). A Dickcissel at Nutimik Lake, MB 22 May was a harbinger of the incursion that followed in the summer of 2020 (ph. AS). 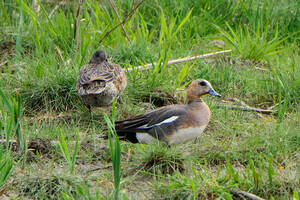 Although Eurasian Wigeons appear with some regularity in the Prairie Provinces, hybrids are seldom reported. This male Eurasian Wigeon x American Wigeon was at Maple Creek, SK on 31 May 2020. Photo © Vicki St Germaine. 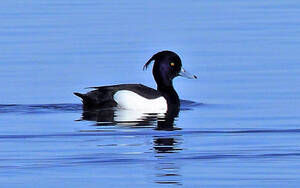 Alberta’s second Tufted Duck was enjoyed by many as it remained at Calgary from 23 to 29 April 2020. Here it is seen on the day of its discovery. Photo © Fred Bowen. 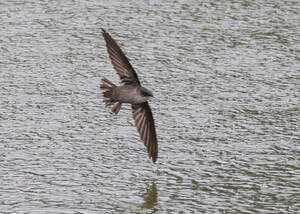 Until not many years ago, there were no confirmed records of Vaux’s Swift in Alberta, as neither specimens nor diagnostic photographs existed. This bird was one of three at Canmore on 21 May 2020. Photo © Neil Denton. 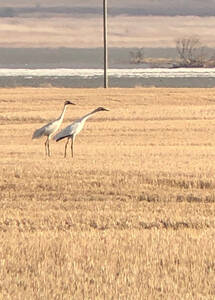 Whooping Cranes were seen intermittently at Whitewater Lake, Manitoba, during the spring and summer of 2020 – here seen on 21 April. Photo © Trevor Catchpole. 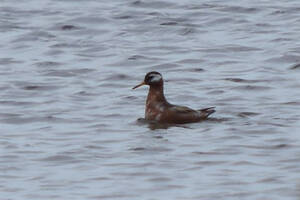 Red Phalarope is a rare migrant through southern Manitoba. This female was at Whitewater Lake on 21 May 2020. Photo © Gillian Richards. 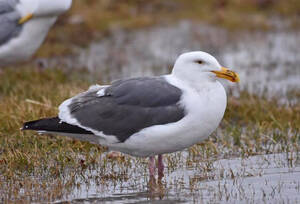 This Western Gull at Grande Prairie on 5 May 2020 was a first for Alberta and only the second for the Prairie Provinces. The only previous record for the region was of a bird at Regina, Saskatchewan in spring 2003. Photo © Sylvain Bourdages. 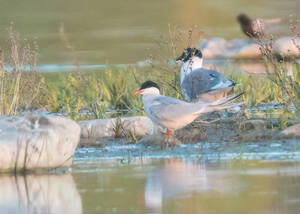 This Arctic Tern at Hastings Lake, east of Edmonton, Alberta, in late May 2020 was one of two reported in the province during the spring. Photo © Bob Bowhay. 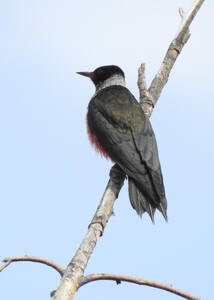 Lewis’s Woodpeckers wander east into Alberta with some frequency. This bird was at Calgary 7 May. Photo © Joan Sveen. 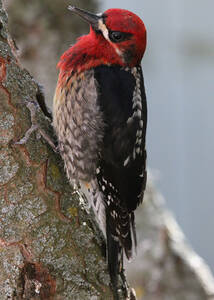 There were two reports of Red-breasted Sapsucker in Alberta during spring 2020. This one was nicely photographed at Red Deer on 26 April. Photo © Darren Petersen. 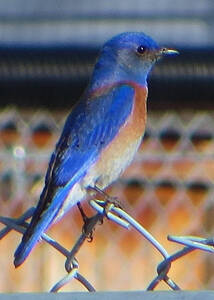 Increasing numbers of Western Bluebirds have been recorded in southern Alberta in recent years. This bird at Canmore on 23 April 2020 was one of three noted during the spring of 2020. Photo © Jennifer Stelfox. 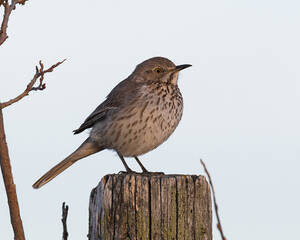 Sage Thrashers are scarce breeders in extreme southeastern Alberta. This bird at Cochrane on 29 April 2020 was well north of that range. Photo © Maureen Hills-Urbat. 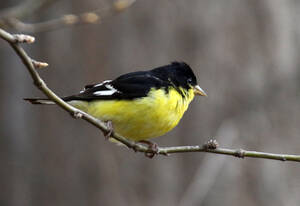 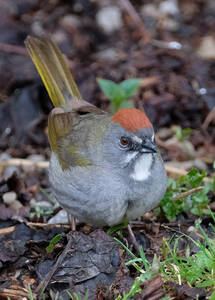 There were two records of Green-tailed Towhee in Alberta in 2020. This bird was at Cochrane 22 May 2020. Photo © Steve Dyke. 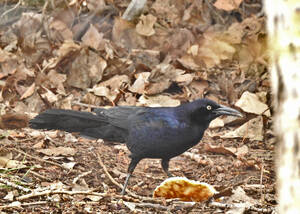 Several Great-tailed Grackles have been reported in the Prairie Provinces in recent years. This bird was at Calgary 11 May 2020. Photo © Michael Sveen. 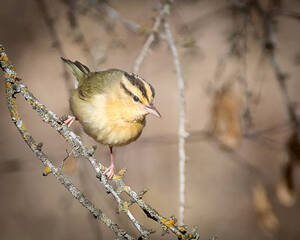 Manitoba’s second confirmed record of Worm-eating Warbler involved this bird at Winnipeg, present from 27 to 30 April 2020 and seen here on 29 April. The first sighting took place at Delta in May 1996. Photo © Claude Garand. 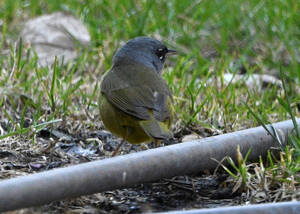 This MacGillivray’s Warbler, the second for Manitoba, made a brief visit to a St Jean-Baptiste yard, long enough for the photographer to take some images. Photo © Joy Snidal Manikel. 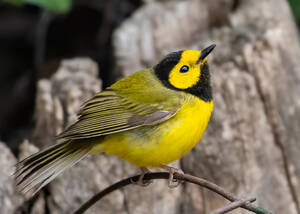 This Hooded Warbler at Regina on 24 May 2020 provided Saskatchewan with about its seventh record. Photo © Annie McLeod. 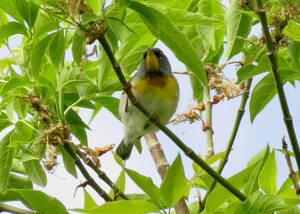 This Northern Parula at Lethbridge 29 May was far west of its usual range.