August was rather wet throughout the region, especially in Alberta. Temperatures were near normal through much of the early fall, though central Alberta experienced a very cold October. November was mild throughout. The Rockies and parts of Saskatchewan were hit by massive snow storms in September and early October, respectively, but the snow did not persist. Southern Manitoba remained virtually snow-free to the end of November. Migration was described as routine in Alberta, without any fallout events, while southern Manitoba had one major wave of passerines between late August and early September. Winter finches were scarce. All three provinces hosted some exceptional rarities.

Twelve Greater White-fronted Geese at Whitewater Lake, MB 27 Nov (CB, GRi) and a Ross’s Goose near Brandon, MB 20 Nov (LR, JH) were late. At least four, but probably six, pale-bellied Brant were at Frank Lake, AB 1–19 Nov (GW, m.ob., ph.) and two at Seebe Dam, AB 20 Nov (m.ob., ph.) may have been the same duo seen earlier at Frank Lake. These were the first reports in Alberta since 1996. A Eurasian Wigeon at Luck Lake, SK 19 Oct was rare (BDL). An out-of-range American Black Duck was at Seebe 30 Oct–12 Nov (E&ND). A Harlequin Duck at St. Ambroise, MB 28 Aug–1 Sep was unusually early (MG, m.ob.). Southern Manitoba attracted greater numbers of all three scoter species than usual. Could the recent arrival of zebra mussels in the province be responsible?

Leucistic individuals of several species were photographed in Alberta, including a pure-white Red-tailed Hawk in the Edmonton area for most of August (m.ob., ph. HC). A flyby Whooping Crane near Rossendale, MB on 7 Sep was convincingly described (BE). Very late was a Sora at Winnipeg, MB 21 Nov (T&ES). An excellent find was a Sharp-tailed Sandpiper near Wetaskiwin, AB 10–11 Oct (GRo, m.ob., ph.); a possible bird was near Allan, SK 10 Sep (SS et al.). Other shorebirds of note included a Black-necked Stilt at Saskatoon, SK 22 Aug (CS), 34 Buff-breasted Sandpipers at Marquette, MB 28 Aug (CA, MG, JSw, BT), and a Red Phalarope at Kaleida, MB 23 Oct (P&VG, ph.).

Alberta’s second Flammulated Owl was found dead at Calgary 19 Oct (KH); the specimen is now at the Royal Alberta Museum. Nearly as rare was a Western Screech-Owl near Calgary, AB from 26 Sep into Dec (D&BR, ph.). An Anna’s Hummingbird at Hinton, AB 29 Oct–23 Nov was captured on the latter date and transported to British Columbia, where it was released (BM, VP; ph. LM). Southern Manitoba experienced an unprecedented influx of Red-bellied Woodpeckers, with at least 19 different birds reported between 1 Oct and the end of the period. One was at Regina, SK from 16–30 Nov (SD, m.ob., ph.). A White-eyed Vireo at Regina, Saskatchewan’s second-ever, on 7 Nov was fortunately photographed by the lone observer (LK). A Sage Thrasher at Banff NP, AB 9 Aug was well out of range (MB, ph.). A Northern Mockingbird near Medicine Hat, AB 28 Aug was rare (YA). Smith’s Longspur is a rare migrant in Alberta, but three were seen this fall: near Seven Persons 27 Aug (YA) and near Medicine Hat 1 Oct (MSv) and 6 Oct (CP).

A Blue-winged Warbler at Inglewood Bird Sanctuary, Calgary 6-7 Sep was banded on the latter date (JR, SL; ph. PK). Although it represented the third record for Alberta, it was the first to be fully documented. An American Redstart at Regina 5 Nov (DS) and a Bay-breasted Warbler near Lethbridge, AB 26 Oct (KO) were late. Black-throated Blue Warblers were nice finds at Winnipeg, MB 6–13 Sep (CA, m.ob.), Canmore, AB 23–27 Sep (E&ND, ph.), and Saskatoon, SK 24 Sep (CS). A well-described Black-throated Gray Warbler at Hanley, SK would be the fourth for the province, if accepted (BH). The region’s first (and Canada’s third) Painted Redstart delighted birders from far and wide at Pinawa, MB 27 Oct–7 Nov (J&VF, AD, PeT, m.ob., ph.). Single Summer Tanagers were at Saskatoon 30 Oct–6 Nov (NS, PhT, ph.) and at Tolstoi, MB 9 Nov (PM, ph.), while a Western Tanager near Ste. Anne, MB 10–14 Nov was visited by many (VR, m.ob., ph.). Notable at Regina, SK 20–22 Oct was a Field Sparrow (DS). Both crossbill species were present in good numbers in southern Manitoba. 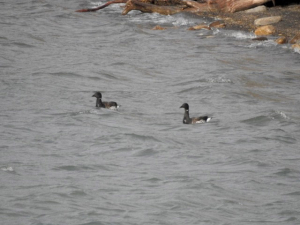 These two Brant at Seebe Dam, Alberta on 20 November 2016, were among at least six birds reported in Alberta during the season. Photo © Michael Sveen. 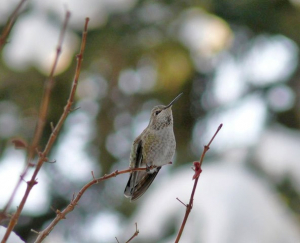 Photographed here on the last day of its stay (23 November 2016), this Anna’s Hummingbird was captured with the onset of cold weather and eventually released in southern British Columbia. Photo © Linda Morgan. 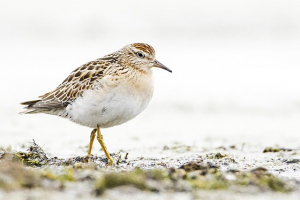 Alberta has had several records of Sharp-tailed Sandpiper in recent years. This juvenile bird was nicely photographed at Coal Lake on 10 October 2016. Photo © Gerald Romanchuk. 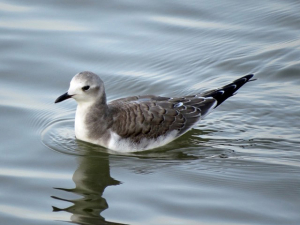 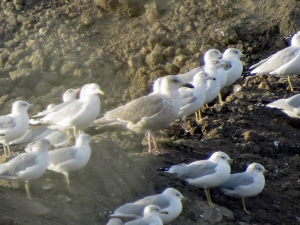 Seen here with other gull species on 15 October 2016, this Glaucous-winged Gull at the Peigan Gull Ponds was the latest of an ever-increasing number of sightings in Alberta. Photo © Michael Harrison. 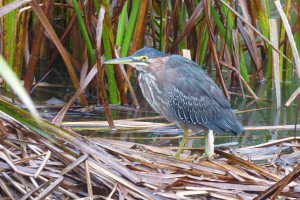 Well northwest of its usual range was this Green Heron at Regina, Saskatchewan. Seen here on 24 September 2016, the day of its discovery, it lingered for almost a month and was enjoyed by many. Photo © Laurie Koepke. 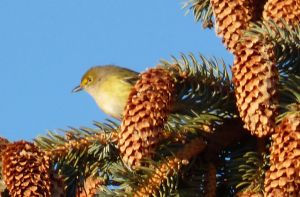 Providing only the second-ever record for Saskatchewan, this White-eyed Vireo at Regina on 7 November 2016 unfortunately did not linger. Photo © Laurie Koepke. 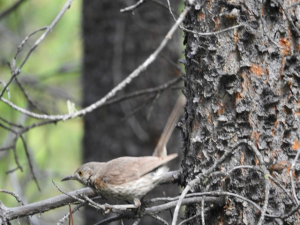 Sage Thrasher is a rare but regularly-occurring species in extreme southwestern Alberta; however, this bird at Banff National Park on 9 August 2016 had strayed well beyond its normal range. Photo © Michelle Belanger. 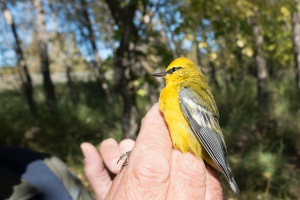 This Blue-winged Warbler, Alberta’s third, was captured and banded on the second day of its stay (7 September 2016) at Inglewood Bird Sanctuary in Calgary. Photo © Steve Lane and Peter Kufeldt. 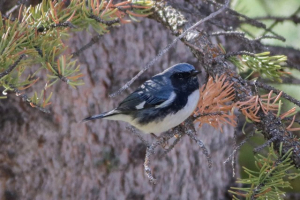 This Black-throated Blue Warbler was a nice find at Canmore, Alberta on 24 September 2016. Photo © Ethan Denton. 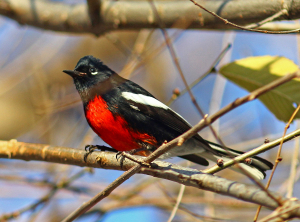 The bird of the season for the Prairie Provinces was this Painted Redstart at Pinawa, Manitoba. Seen here on 7 November 2016, the last day of its stay, it had been present since 27 October and was seen by many. It provided the third-ever record for Canada. Photo © Josiah van Egmond.