Chickadees and titmouses. Kinglets and creepers. Surfbirds, turnstones, tattlers, and other “rockpipers.” Those and other avian assemblages make sense. Spend any amount of time at the backyard feeder (chickadees, titmouses) or in the winter woods (kinglets, creepers) or on a West Coast jetty (rockpipers), and you’ll see what I’m talking about.

Those assemblages are, the way I’ve conceived them, passive or incidental. Your feeders will have chickadees, with or without titmouses. Delete creepers from the winter woods, and the kinglets will carry on largely unaffected. Same deal with sea rocks sans surfbirds; the tattlers and turnstones are still there.

A different phenomenon involves bird species that actually depend on the presence of another species. The presence of one species causes the presence of another. Where I live, burrowing owls and black-tailed prairie dogs leap to mind. In order to find the former, you go looking for the latter. I’ve seen a lot of burrowing owls in my home state of Colorado, but I’ve never seen one away from a “dog” colony. The worldwide association between cattle egrets and domestic ungulates is a bit looser, but still. A good rule of thumb is: Look for the former in and around pastures grazed by cattle and horses.

Here’s one you might not have thought of: Look for Wilson’s phalaropes where there are northern shovelers. Like this: 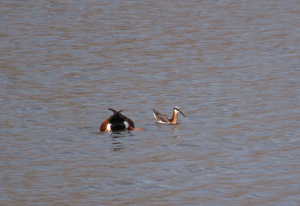 Just a coincidence? Well, check this out:

The phalarope, a bright female, seems to be keeping pretty close company with that male (“drake”) shoveler.

Here the female is joined by another, and they’re feeding alongside a pair of shovelers:

She and her buds kept at it for the whole week they visited my local patch. Here’s a video short from a few days later:

There were five phalaropes—three females and two males—out there, along with about a dozen shovelers. And lots of other ducks: gadwalls and mallards and blue-winged teal and even a wood duck. Yet the phalaropes were always with the shovelers and never with the other ducks. Neither did they associate with the pelicans and cormorants that dropped in from time to time, nor with the other shorebirds: snipes, avocets, yellowlegses, and more.

Shovelers, I learned two springs ago, spin like phalaropes. The big ducks pull up food, lots of food, by spinning. Phalaropes, I’ve known forever, famously spin. Most of the time, in my experience anyhow, phalaropes spin by themselves, in small to large flocks. But if there are shovelers nearby, why not go along for the ride? Or, if I may mix my metaphors, for the free lunch?

Makes all the sense in the world. I’m nearly certain that’s what’s going on here. Another fun little discovery brought to you by the digital revolution. Birders with cameras figuring out more about birds than we ever knew.

Okay, I confess that I haven’t reached for my Bent on this one. (Millennials and Zoomers: Arthur Cleveland Bent wrote it all down long before Birds of the World Online was even a gleam in the Cornell/Macaulay content-generators’ eyes.) And I further confess that I’d somehow overlooked Cathie Sandell’s comment, right there for all the world to see, at the end of my spinning shovelers installment of April 11, 2019.

But my bigger point stands. Birding and nature study are enjoying a renaissance at the present time. By the time this posts, there will still be 27 days left in May, the greatest month of the birding year in much of the ABA Area. While away a half hour with phalaropes and shovelers or whatever else you got at your local patch. You’ll surprise yourself. You might surprise all of us!

I have watched Eared Grebes follow Buffleheads around and dive right after them. Never from underwater so I don’t know why, but I have seen quite a few different Eared Grebes do this and always with Buffleheads, usually males. Mostly at Birch Bay State Park in NW Washington.