Out Owling for Saw-whets

Out Owling for Saw-whets 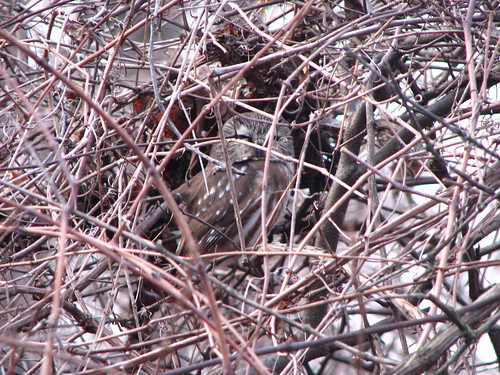 Northern Saw-whet Owl roosting in a vine tangle, by carroll.cathy, on Flickr.

For many of us in the ABA Area, October and November is when northern and mountain owls start showing up close to our homes.

For much of my nearly 50 years of birding (east of the Mississippi), going out owling meant playing 4 calls (first on a cassette recorder, then an iPod): the Eastern Screech-Owl “whinny” and deep trill. The classic Great Horned Owl territorial hooting. The raucous “who-cooks-for-you’all?” of the Barred Owl, and the “toot-toot-toot-toot-toot-toot …” of the Northern Saw-whet Owl.

All I ever got to respond were screech and Great Horned, because there simply were no Barred Owls in the Chicago area (boy, has that changed), and saw-whets either didn’t call back or simply weren’t there. Barred Owls are range-expanding, and are filling up woodlands all over northern Illinois. As for saw-whets, well, it turned out that I didn’t know what kinds of noises they made in fall and winter. Now I do, and it’s changed everything.

A friend of mine turned me on to the Cornell 2-CD set Voices of North American Owls. Owls are talkative, and on these disks is a treasure trove of owl noises. My first experience with a saw-whet at night was the result of broadcasting the “fall vocalizations” in some likely habitat near Chicago. Since then I’ve heard mostly barks and an occasional “strangled cat” whine. One time, while doing a Christmas count, I started up a saw-whet, which then got a second bird to start calling. Our small group sat back and listened to them go at it, with one of them running through the whole repertoire of calls, from barks and “kneeuks” and whines to finally finish with the “toot-toot” advertising call. 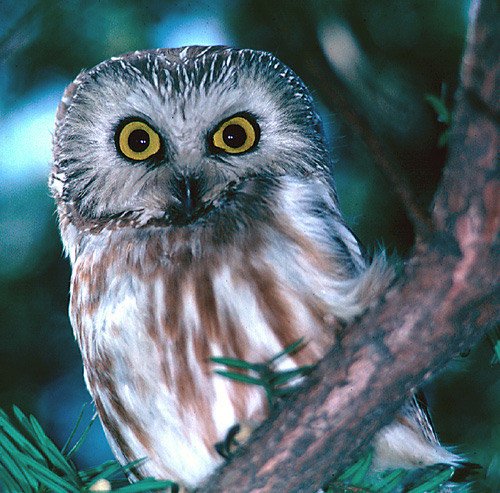 What are these calls? Here’s a few examples of Northern Saw-whet Owl–what are typically referred to as “fall vocalizations”:

I call this the strangled cat whine:

Here’s a barking call, with a whistling whine: 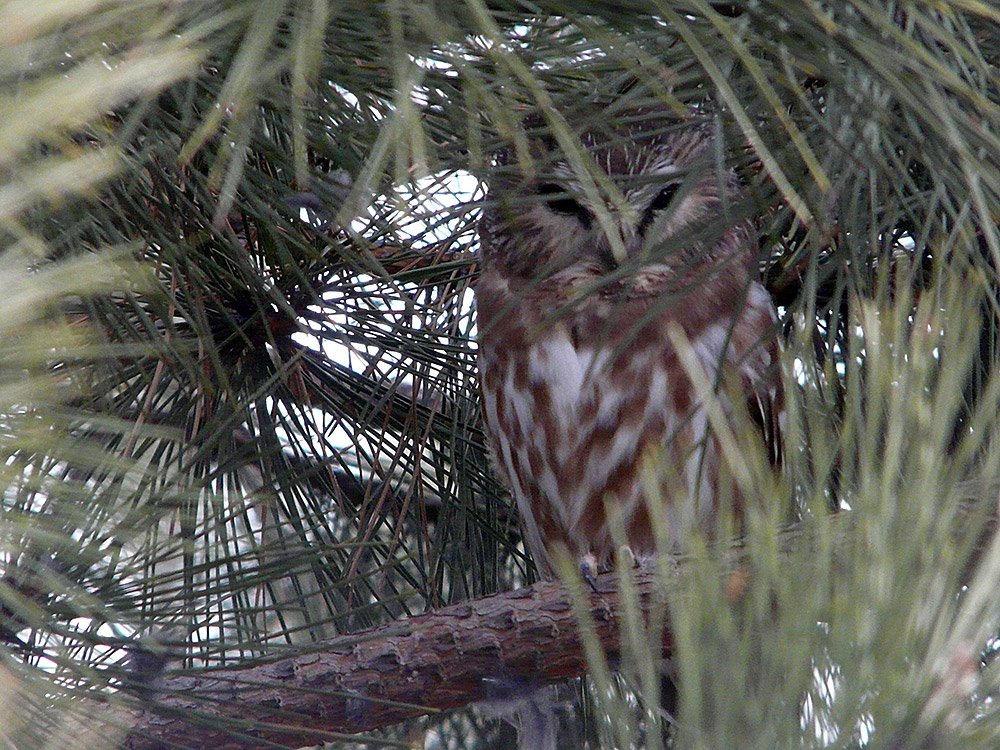 Sometimes you have to look very closely. Northern Saw-whet Owl in a Chicago cemetery. March 2008. Photo by Greg Neise.

But sometimes out in the field … things happen. At a spot that we knew at least two Northern Saw-whet Owls had set up winter territory, Illinois birder Geoff Williamson joined me to listen for them. At 00:10 in the next recording, I start playing the call. You’ll hear 6 “kneeoowk” barks coming from my iPod. The recording has a lot of background noise, which sounds like an airplane going over. At 00:18 I cut the recording (after the 6th bark) and immediately a saw-whet responds, with a long-loud, rising, “strangled cat” call. But is it? Barely a second later, a Barred Owl starts calling, and we’re not sure for a moment whether the first call was a saw-whet or the Barred (the “cat” call seemed to be much closer than the Barred). But we determined that it was a Barred Owl after all, either a pair, or just a female.

But as we stood in the dark listening, a Northern Saw-whet did call, this time very close and unambiguously:

It was a very still, quiet night. What sounds like a very distant Great Horned Owl in this last recording is trucks speeding along an 8-lane expressway a few miles away.

The week we made that recording, I found 9 Northern Saw-whet Owl winter territories in a forest preserve area of about 5 square miles, in the Chicago metro area. Only one of them had any conifers at all. What they all had in common was forest edge, with rather dense undergrowth and wild grape, or other types of vine tangles. Gerry Wykes describes the perfect Saw-whet roosting site as, “…with a dense covering for a roof, an airy open bottom, and a location low in the “shrub’ry.” It was the type of spot I’ve eyed hundreds of times before, except that all my spots lacked the presence of a Saw-whet.”

That has been my experience as well—I’ve never found one that wasn’t in a conifer. But my nocturnal endeavors proves Gerry’s description is true … these little owls are just really, really good at not being found, and they’re probably more common than we realize. But beware, because screech-owls can bark too, but if heard well, you can tell the difference:

And I learned another thing while studying owl vocalizations in my local forest preserve. I had sometimes heard a guttural, squeaking noise made by some animal. Not really knowing what else it could be, I assumed it was a raccoon, or possibly a flying squirrel. That is, until I learned of the Eastern Screech-Owl’s “chuckle-rattle”:

That winter of 2011, I heard 6 different vocalizations of Northern Saw-whet Owls, and learned of a new one made by Eastern Screech-Owls. Our little birding team that did big days, Christmas counts, and chased rarities together studied recordings of local owl species calls, and got pretty darn good at finding them–particularly saw-whet owls–in the forest preserves and cemeteries near Chicago. But one pitch-black moonless December morning, on a Christmas count, we heard a call that we all knew instantly, but never thought we’d encounter in the field:

That is a Northern Saw-whet Owl–what’s been called the “the comb call”. Eastern Screech-Owl also gives a similar, lower pitched version, that sounds like someone dragging their thumb across the tines of a pocket comb (hence our name for it).

Spending some time in the dark listening for owls is good for the soul, and can be exciting. One magical morning, at the start of a big day in January with my buddy Jeff Skrentny, we made our first stop at a woods where Eastern Screech-Owl was reliable. As we stepped out of the car into the still bright moonlight we were greeted by an owl chorus. The first thing we heard was a very loud Barred Owl, then a second Barred, then also a very close screech-owl. A few seconds later a Great Horned started up and in the near-distance a saw-whet! It was an experience neither of us will ever forget. 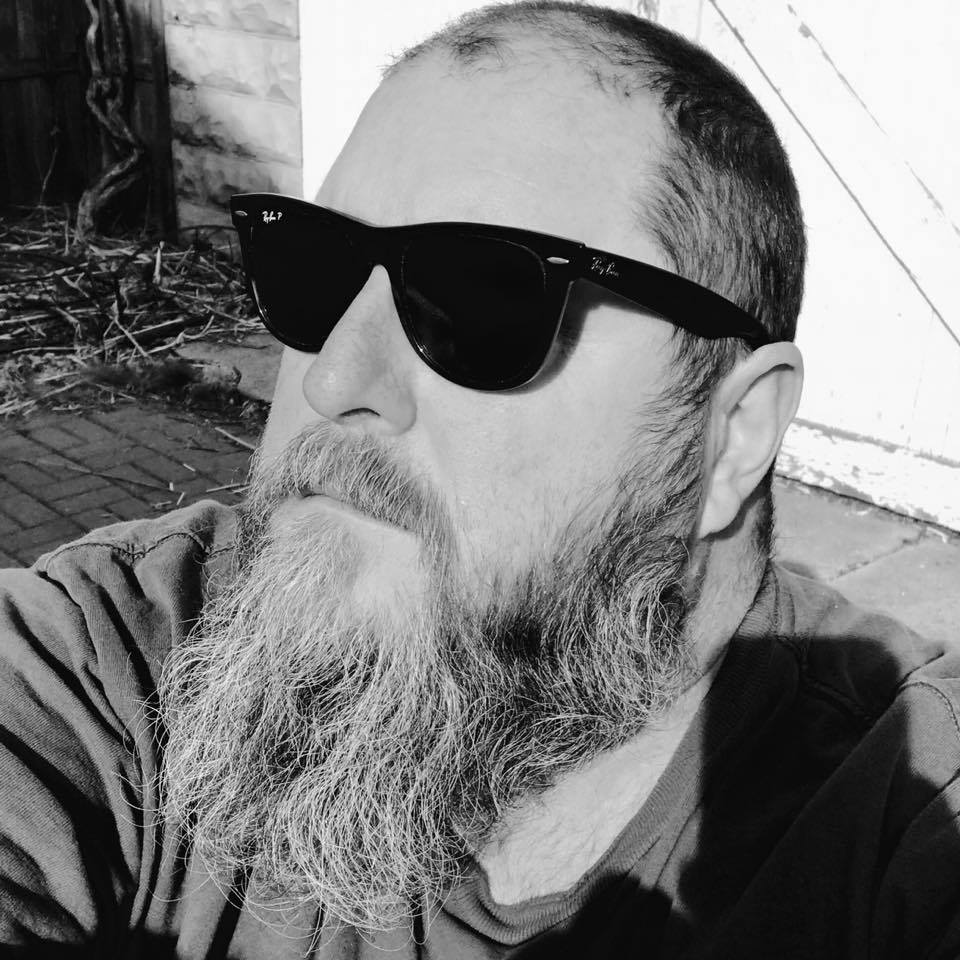 Greg Neise developed his interests in birds, photography and conservation as a youngster growing up in Chicago, across the street from Lincoln Park Zoo. At the age of 13, he worked alongside Dr. William S. Beecher, then Director of the Chicago Academy of Sciences and a pioneering ornithologist, and learned to photograph wildlife, an interest that developed into a career supplying images for magazines, newspapers, institutions and books, including National Geographic (print, web and television), Chicago Tribune, Chicago Sun-Times, Boston Globe, Nature, Lincoln Park Zoo, Miami Zoo, Jacksonville Zoo, The Field Museum and a host of others. He has served as President of the Rainforest Conservation Fund, a volunteer organization dedicated to preserving the world’s tropical rainforests. Greg is Web Master for the ABA, helps manage social media, sits in on the ABA Podcast on occasion, and of course, is a fanatical birder.

Thoroughly enjoyed this! Thanks so much!

Great job! I really appreciate the recordings. Keep up the great work!

Wonderful to hear! Thanks for doing this.

Last Saturday we were awakened by an owl calling in a way I didn’t recognize. I can’t seem to attach it here, but i sure would love help identifying this early morning visitor. Could I email one of my cell phone recordings to you?

This is great Greg, thanks so much. I love Saw Whets–in my Canadian Maritime woods last June one flew out in bright sunshine at noon, circled me closely, and then flew a few feet away to look me over from a low branch. It was a superb encounter.

Excellent article. I will use what I learned this week. More like this please!

Hey Greg! This is wonderful. Thanks for using my recording here! I think the immediate reaction to the Merlin NSWO “skiew/ksew” (barking) call in your first recording is a saw-whet. Sounds perfect IMO and would match you initial idea of a closer NSWO rather than further away Barred Owl. Somehow that barking really does agitate many owl species. I often whistle an impression of that barking (as best I can) and have had multiple owl species respond to it. But that immediate wailing to the Merlin vocalization sounds great for NSWO.

I believe most NSWO banding sites use the toot toot calls. I wonder if changing it up might make a difference. Good article. Thanks.

So helpful, thank you very much. Especially the information about the Saw-whet Owls. I have 2 Barred Owls that started vocalizing in July literally right outside my window! At first I didn’t even know what they were; it was my first time hearing a Barred Owl and they have a lot of variation in their calls apparently. Now I’m obsessed with waking up and listening for Owls haha but I’ve only heard the Barred and Great Horned. I know there’s got to be some Saw-whet Owls around too! When you’re listening for Owls, all roads feel like the highway ugh.… Read more »