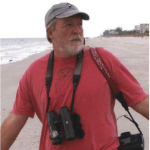 Photos and answers are supplied by Tony Leukering, a field ornithologist based in southeast Dodge City, KS, with strong interests in bird migration, distribution, and identification. He has worked for five different bird observatories from coast to coast and considers himself particularly adept at taking quiz photos (that is, bad pictures!). Leukering is a member of the Colorado Bird Records Committee and had been a reviewer for eBird since its inception. He is also interested in most everything else that flies, particularly moths and odonates.