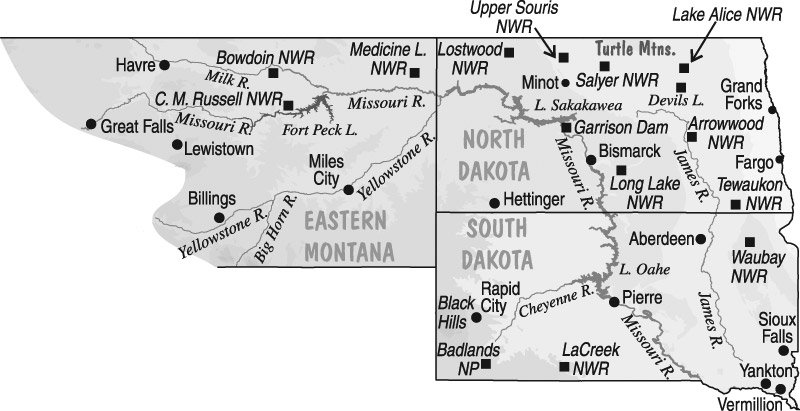 Shorebirds of interest included a Ruff in North Dakota and Snowy Plovers in both Dakotas. A Black-legged Kittiwake was unusual for spring, and North Dakota had another Great Black-backed Gull. Other North Dakota notables were Plumbeous Vireo, Boreal Chickadee, and Great-tailed Grackle.  The 2nd and 3rd records for Eurasian Tree Sparrow occurred in North Dakota.

South Dakota recorded a Mississippi Kite, and Montana had a Golden-winged Warbler and Summer Tanager.

Trumpeter Swans continue their push into eastern North Dakota from Minnesota. Six reports totaling 20 individuals were received from the Red River Valley 8 Mar to the end of the season.

The earliest for North Dakota, three Horned Grebes were at Williston 7 Mar (AFA).

A Black-necked Stilt was early 12 Apr at Arrowwood NWR, ND (PRS, MMJ). Two Black-necked Stilts were exhibiting nesting behavior 28 May in Watford City, ND (CDE, REM). This species appears to be establishing a foothold in the state. Casual in North Dakota, a Snowy Plover was in Grand Forks 6 May (SJA, DOL). A Snowy Plover 29 Apr in Gregory, SD provided the 10th record for the state (p. a., CA, JC).

Rare in Montana, 2 Ruddy Turnstones were at Medicine Lake NWR 31 May (DB). Rare across the region, Red Knots were at Freezout Lake, MT 6 May (MS) and in Hughes, SD 13–16 May (RDO, DB). Accidental in North Dakota, a Ruff was photographed and seen by many in Burleigh 14–15 Apr (p. a., LG, PSF). This provided the first record in the state west of the Red River Valley.

Accidental in North Dakota away from the Missouri River, a Least Tern was a treat at Fargo 16 May (p. a., KRC). An early Caspian Tern was noted 8 Apr in Stanley, SD (RDO).

Continuing the trend of early water bird dates, an American White Pelican was in Meade, SD 3 Mar (EEM). Now seemingly regular in South Dakota, a Neotropic Cormorant was in Codington 27 May (p. a., BP).

An early Turkey Vulture was at Theodore Roosevelt NP, North Unit, North Dakota 6 Mar (AFA). Also early, an Osprey was in Pennington, SD 27 Mar (RSL). The 8th record for South Dakota, a Mississippi Kite was in Union 11 May (p. a., DS). A rare migrant in North Dakota, a Red-shouldered Hawk was in Grand Forks 16–18 Apr (SJA). An early Broad-winged Hawk was tallied in Union, SD 3 Apr (GJS). A notable movement of Broad-winged Hawks occurred in Malta, MT 28 Apr (FP). Movements of more than a few individuals of this species in Montana are rare. A late Rough-legged Hawk was in Pennington, SD 8 May (JLB).

Very rare in eastern North Dakota, a Burrowing Owl was in Grand Forks 16 Apr (RW). A Barred Owl pair with 2 young were noted frequently 27 Apr through the season in Fargo, ND. This provided the first nesting record for Cass (DM, KRC, DWR).

Rare in western North Dakota, 3 Eastern Phoebes were tallied in Williams 19 Apr–2 May (AFA). The 7th report for North Dakota, a Plumbeous Vireo was seen in Fargo 23 May (p.a., KRC). Casual in South Dakota, a White-eyed Vireo was noted 26 May in Minnehaha (p. a., CA).

A Boreal Chickadee wintering in Benson, ND was photographed 21 Mar (p. a., REM, CDE). This furnished the 14th report for the state and the first since 2004. Pacific Wrens were reported again this year in Lawrence, SD 6 and 17 May (p. a., DGP, RDO). There seems to be a small breeding population in the higher portion of the Black Hills.

Now rare in North Dakota, an Evening Grosbeak remained at Fargo until 9 May (DWR).

A large number for mid-May, 600 Lapland Longspurs were still in Renville, ND 14 May (REM). McCown’s Longspurs were noted again this spring in South Dakota with birds seen 6 Apr in Harding (p. a., ND).

A few sparrows made early showings in South Dakota. These included a Vesper Sparrow 27 Mar in Charles Mix (ND), a Lark Sparrow 15 Apr in Charles Mix (KP), and a Lark Bunting 21 Apr in Hankon (EDS). Not often reported in April in recent years, a Baird’s Sparrow was in Williams, ND 24 Apr (AFA). Rare in eastern Montana, a Fox Sparrow was at Fort Peck 9 Apr (CC).

An Eastern Meadowlark was northeast of their usual range in South Dakota 15 May in Aurora (p. a., KP). The 9th report for North Dakota, a Great-tailed Grackle was at Drayton 19 May (p. a., JO). The only South Dakota report was from Brown 24 Apr (GO). An Orchard Oriole was early 22 Apr in Charles Mix, SD (RM).