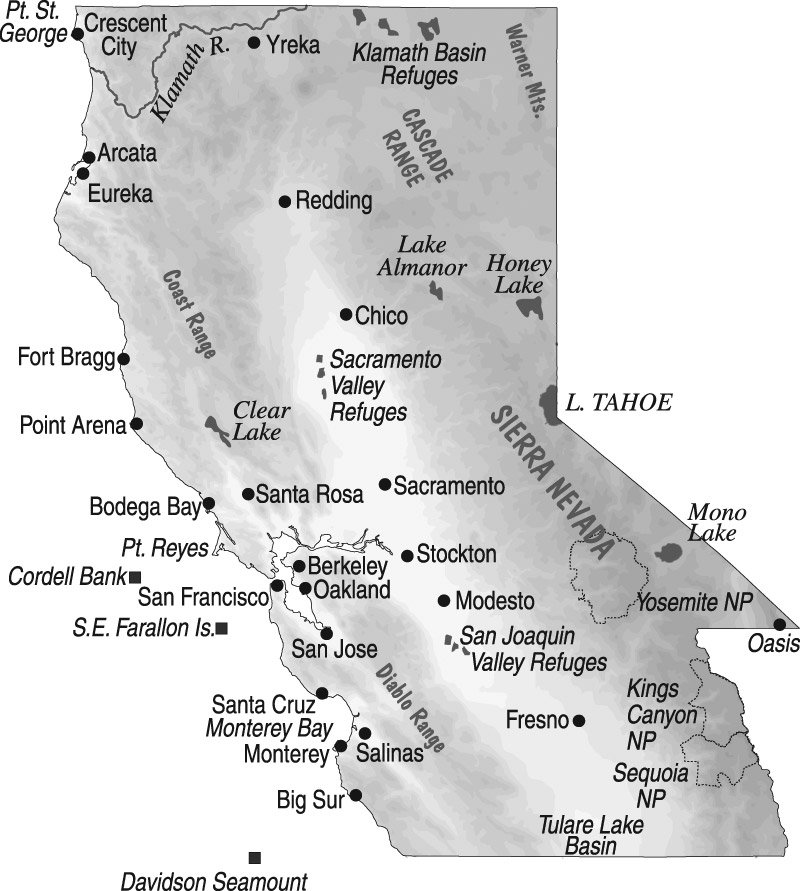 The Northern California region covers a 47-county area representing the central and northern portions of the state. The region’s ornithology has been well-studied since at least the late 1800s. Following pioneering investigations by early ornithologists such as Joseph Grinnell, innumerable others have continued to shed light on the region’s avifauna, including birders, amateur ornithologists, and ornithological organizations such as Point Blue Conservation Science, the Institute for Bird Populations, California Partners in Flight, Audubon California, and Western Field Ornithologists.

Northern California is well known for its highly diverse physiography and ecosystems, from the Sierra Nevada and Cascade Ranges (peaking on Mount Whitney at 14,505 ft./4,421 m) to the nearly 600 mi./1,000 km of shoreline along the Pacific Ocean. In between lies the Central Valley with its extensive agriculture and waterfowl refuges, the highly diverse Coast Ranges, and the Sacramento-San Joaquin River Delta and San Francisco Bay. Upwelling produced by the California Current produces highly productive nearshore waters that support myriad seabirds. Though tiny, the Farallon Islands host large seabird colonies and are a magnet for vagrants.

The combination of the region’s large size (exceeding that of most individual states and some provinces), long longitudinal profile (attracting birds from the north and south), rich array of habitats (from the humid forests of the Pacific Northwest to the arid shrublands of the Great Basin and southern San Joaquin Valley), and high seabird diversity, combined with the coastal concentration of vagrants coming from all directions and an extremely active birding community, has resulted in an impressive list of nearly 630 species as of October 2020. New species are still added annually.

The ABA gratefully acknowledges the contributions of Northern California Regional Report Compilers Jeff Davis, Logan Kahle, Mike Rogers, and Steve Rottenborn to promoting knowledge and understanding about the birdlife of the continent.