No. 9: Birds and Absence

No. 9: Birds and Absence

Question: What summer bird will you miss the most?

The first cold day of fall arrives, I’m forced to wear something other than a t-shirt, and every time a Chimney Swift zips past, I wonder: is that the last one of the year?

It usually isn’t, of course, because a second later I’m staring at another, and then another. And the next day I’ll spot a few too, although sometimes noticeably less than the day before.

But eventually, one Chimney Swift that passes overhead will be my last for the year. Last year it was October 5. The year before, it was October 10. The one before that, October 17. Today is October 5, so it’s possible I already saw my last swift of the year for 2021.

Like Woodcock Walks, Chimney Swift roosts are the kind of single-species avian phenomenon captivating enough to justify their own specific bird walk oriented entirely around observing and enjoying the species. My neighborhood swifts are surely already gone. There is a chimney they roost in only a block from our house: watching them is the best, the way they tornado in for the night, sometimes veering away at the last second, until they’re all scrunched up—cuddling?—together. Rows and rows of perched Chimney Swifts, something that for much of the year is so close by, and yet so few birders ever see.

But we do see and hear them streaking and twittering overhead. Constantly. That’s one of the things I love about Chimney Swifts: when they’re back, they’re back, and they’re around every single day. Until about now.

I imagine the ones I’ve been seeing from my porch lately are on their way south from Ontario or other points north, with many miles left before reaching their Amazonian winter havens. Can you imagine splitting your time between the Amazon and a chimney in Pittsburgh, PA, or Hamilton, ON? What cool birds.

As birders, we have our built-in distractions to remedy any sense of sadness for our favorite departed birds by focusing on the next exciting cyclical bird movements: late fall migrants, followed by the possibility of enigmatic northern gulls and owl and finch irruptions, although it isn’t seeming likely this will be a finch-y winter.

I do of course look forward to finding out what will be around for the tail-end of fall migration and then winter. Even if this winter ends up being finch-less, owl-less, and gull-deficient, I have no doubt there will be something interesting about. 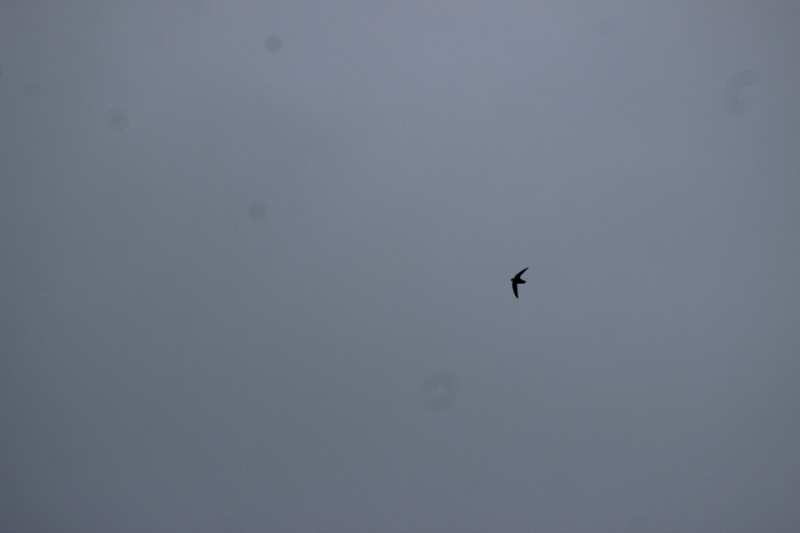 This was the last Chimney Swift I saw yesterday. Was it my last one for the year?

But I’ll miss my swifts. They’re about the perfect summer bird for me, always around and always uplifting. Present and conspicuous, yet also mysterious. Just hearing their chittering, even from indoors, puts me in a good mood, eases stress. Birds that constantly vocalize can sometimes test our patience, even if we’re birders, but I can’t imagine anyone has ever gotten tired of hearing Chimney Swifts and their nonstop socializing. What a Chimney Swift has to say is always worth hearing.

The swifts I saw yesterday were no longer twittering, as if they’ve collectively cut the small talk for the year and gotten serious about their pending pilgrimage. In that sense I am already feeling their absence, and whether my last swift was yesterday or is tomorrow or a week from now, my favorite summer bird will soon be gone for the year, with about six months to go before they’re back. Their inevitable absence is a bit of bummer, but it’s fun too, to look at each passing swift and wonder whether it’s my last for the year. As we lean into fall and winter, what summer bird will you miss the most?

Their arrival means spring is here for me. I love to see them flying exuberantly around then love to hear them chattering in our chimney in the evening. Plus I envy their exciting migrations.
Thank you!

Dorothy, thank you so much! They’re my faves too!

And I think of them the same way as you regarding spring–other birds return first, but when the swifts are overhead, spring has truly begun. Their departure in fall is the other side of it.

Summer birds I miss the most are Long-billed Curlews. Like your Chimney Swifts they have gotten silent. I might see some curlews as late as November or even December but I miss them and their calls that I can hear from a mile or so away when they are gone.

When they return in the Great Basin and I can hear their calls it is then that I feel that spring has arrived.

Mia, oh, I can only imagine with such a special bird like Long-billed Curlews. I was just elated when I finally saw one in Texas. I haven’t heard their call in person–it’s a species I hope to spend more time with in the future.

Maybe because I’ve got “swifts on the brain” after having read this piece, I’ll have to put in a plug for another aerial insectivore: the cheery and industrious Barn Swallows that I hear almost continually in my Colorado neighborhood from late April through late September every year. Singing insects are another for me. The last of the plains harvest flies (right around now), followed by the last of Allard’s ground crickets (around Halloween), and then eventually the last of the snowy tree crickets (sometimes as late as Thanksgiving; they’re hardy!). Watching–and hearing!–cranes migrating over is poignant and powerful; but not… Read more »

Oh, Barn Swallow: that’s a neat one. I don’t really see those around our house actually–only in migration basically–but I bet I would miss them a lot if they were a more consistent presence.

I’d have to think about what insect/non-bird I miss most. Maybe greater anglewing? I like their song best of the ones I consistently hear around here. You know: I really miss the groundhogs in the yard once they’re in for the year.

I discovered chimney swifts as a new birder around my home in the city of Lancaster, PA. They became my reliable aerial companions, for either by sight or sound, I could always enjoy them just outside my door. I now live in rural southern Ontario and have yet to see a chimney swift at the otherwise very birdy camp I live at. I miss them, but always enjoy the nostalgic feeling I get when, visiting town, I hear them chittering above and looking up, catch a glimpse of them streaking above the streets and buildings. Ahh, home.

Huh, I hadn’t really thought about how my city slicker-ness entitled me to extra swifts, but it makes sense. Now I will appreciate them even more. That is fascinating that you haven’t had a swift at your rural home, even once. Perhaps swifts are more of a cohesive societal force than we give them credit for!