No. 8: Birds and Fall/Winter Plumage

No. 8: Birds and Fall/Winter Plumage


Birders love fall migration, and they love it for lots of different reasons: there are more birds because it’s after breeding season, migration lasts longer than in spring, and the birds themselves move more slowly, often lingering for longer in desirable habitat and sometimes affording twitchers a little extra time to catch up to rarities.

Some birders also love fall migration because the identification of some species brings an added test of skill: birds that are a cinch to ID in spring are tricky in the fall, including, famously, several species of warblers. In addition, many species are quiet in fall, so some birds that are normally easy to identify by sound must be visually confirmed, and even good visuals don’t guarantee an easy ID.

Because of this, when birders discuss fall plumage, it’s typically framed as an ID challenge. By contrast, spring plumage is often discussed with emphasis on how beautiful birds are in spring, with their bright and vibrant colors matching the renewal of the season.

But fall plumages can be beautiful too. Our habit of honing our ID skills so we can recognize as many birds as possible when the most birds are passing through makes sense, but it may also make it easy to overlook the charm and elegance of late year plumage changes.

Here in Pittsburgh, the Yellow-rumped Warbler rearguard has begun to arrive, which means it won’t be long before most of the warblers have passed through on their way to their winter havens.

My favorite of the fall warblers is the Chestnut-sided Warbler. I don’t know why exactly, but it always strikes me as a slight surprise every fall when I get my bins on a bird and see my first of season fall plumage Chestnut-sided: Oh! A Chestnut-sided! That’s what they look like now… right!

It’s not always exactly like that, of course: Chestnut-sided is a common breeder in Pennsylvania (the Latin name even says so!), and sometimes you do get to see one that is in the middle of transitioning from breeding plumage to fall/winter.

But if often feels, to me at least, like a shocking reminder when I see a Chestnut-sided that is, suddenly, missing the black face markings and most or all of the chestnut stripe along its flanks, and is instead sporting a fairly prominent white eyering and plain gray face.

Even though these changes aren’t that dramatic or numerous when tallied up—the back and wings look similar—Chestnut-sideds somehow look like a really different bird in fall. The springtime black mustache stripe blending into the chestnut side-stripe gives the bird an air of purpose and commitment, while the blank face and eyeing of fall appear almost inquisitive, like the bird is thinking about whether it should keep migrating—maybe this is far enough? 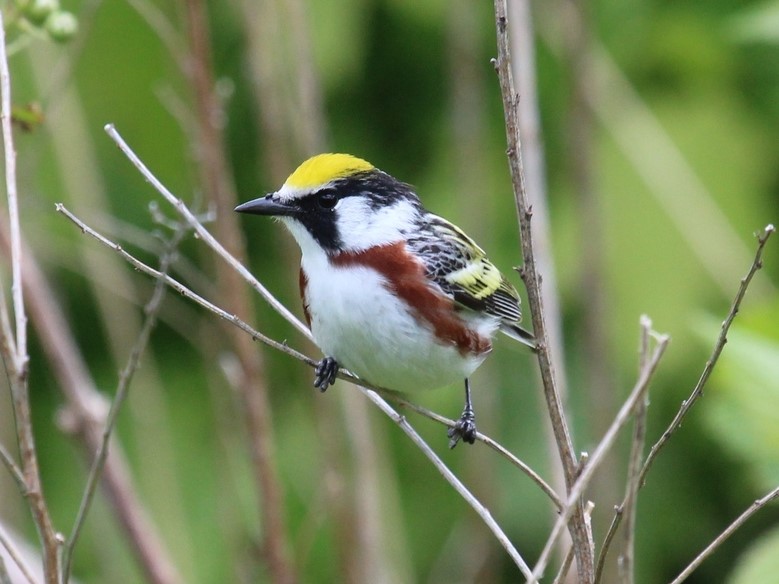 My wife, Adrienne, cites the Chestnut-sided Warbler as her sparkbird: on a spring birdwalk together, she got a binocular view of one and was astonished by the color and detail, difficult to see otherwise.

These are projections, maybe even elaborate reveries, but it’s hard to argue that one reason we love birds is that birds have a lot of character, and plumage is a lot of what gives them that character.

The plumages of the Chestnut-sided Warbler somehow seem to go with the seasons, the determination of spring and then the relief and hesitancy of fall. Both are beautiful, and my first Chestnut-sided of fall is just as much and possibly more of an aesthetic delight as my first of spring. And it always seems to surprise me, both with its notable differences and with its beauty.