Question: What are some of your favorite examples of or experiences with vismig (visible migration)?

It’s a bit different with a baby: no chases for me this summer, and even patch birding has been minimal.

But that’s ok, because the birds make it ok.

Birders know that one of the great things about birding—something that distinguishes birding from most and possibly all other forms of natural history study—is that we can make birding just about as demanding or relaxing as we want it to be. We can travel to the ends of the Earth in pursuit of birds, or we can just let them come to us. Many birders choose some of both, but regardless of the balance, wonderful birds come and go and live alongside us just about everywhere.

So it was for me on one recent early-afternoon walk with my wife, Adrienne, and four-month-old daughter, Maya. The usual suspects were about the neighborhood, but a pair of common nighthawks flying over a row of houses punctuated the excursion. It was too early in the day for these birds to be out hunting, and they seemed to be flying purposefully through and away from the area.

Vismig means visible migration: when you see birds actually in the act of migration, rather than stopping over to rest and refuel on their migration journeys.

I believe vismig is a Britishism that has migrated to North American birding circles, but I stand to be corrected on that—please comment if you have more info.

At any rate, vismig, when we’re lucky enough to enjoy it, is glorious in its simplicity: how cool is it to actually see a bird that is definitely, at that exact moment, migrating?

It’s often easier to glimpse vismig with the bigger birds: raptors and waterfowl, for instance. No doubt that is in large part true because the big birds are easier to spot (and identify) in the sky, even when far away, but also because the smaller birds often move in the darkness—hearing them through nocturnal flight calls is far easier than seeing them with our own eyes.

I think of vismig as something that’s easier to experience in the fall: spring is so fast and chaotic that it’s often harder to see birds actually in the act of migration. But fall migration is slower—the birds are a bit more willing to take their time getting to their wintering spots—and, maybe even more importantly, there are many more birds around.

A favorite vismig moment of mine from years past was from a fall trip to the Florida Keys, when Adrienne, two other birding buddies, and I turned a corner to see four, five, six…eight ospreys cruising along the coast toward and then right past us on their migration journeys to parts south! Far and away the most individuals of that species I’d ever glimpsed in a single view. 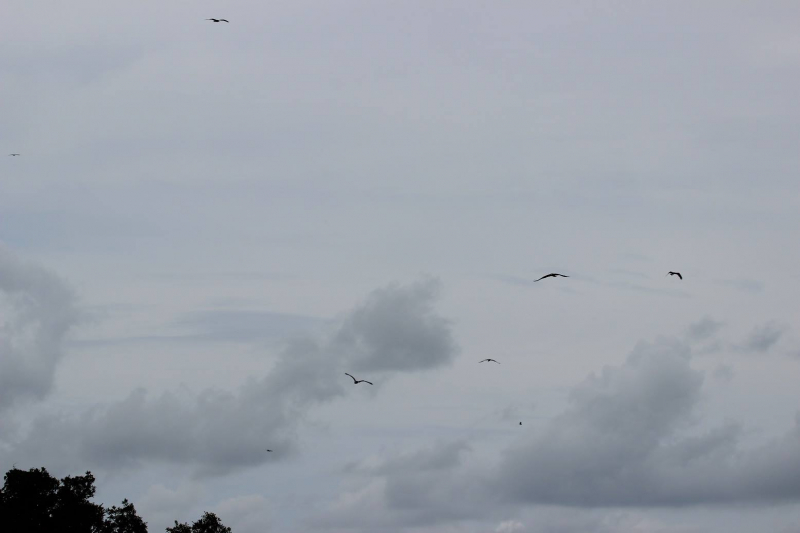 Eight ospreys in one view in the Florida Keys: a vismig victory.

Some of the great birding destinations in the ABA Area, for instance Whitefish Point and Hawk Mountain, are at their essence superb locations to experience vismig: those are such great places to see spectacular numbers and varieties of birds on the move.

Birders like birding because it connects us to larger things, and vismig is an especially pronounced moment of connection: that bird there is migrating. Like, right now! Whether it’s southbound ospreys or neighborhood nighthawks, experiencing vismig, even with familiar species, is a thrilling highlight of fall birding. What are some of your favorite examples of or experiences with vismig?

No more amazing “vismig” spectacle on the planet than what can be seen in Veracruz, Mexico at this time of year! It’s called “Rio de Rapaces;” translation: River of Raptors, and it is a beyond belief to see! My best vismig experience to date, by far!!

Bob, that is so cool you’ve actually seen that!!

I have seen some footage–just unbelievable.

Kind of humbling too to see you cite that, since we have good hawkwatching here in PA as well.

A couple of springs ago I was standing on the beach at Pie’manson when I picked up a weird, floppy brown bird approaching from far, far out over the Mediterranean. I stayed with it, and soon enough the white wing patches were obvious through the scope: a nightjar. As it got closer to the beach, a parasitic jaeger started to harry it; the nightjar survived, though, and as soon as it was over the beach it pitched into the dune vegetation, no doubt as relieved as I was awed.

A nightjar coming in from the sea!!! Too cool, Rick.

My favorite vismig spot is Bear Divide, in the mountains above Los Angeles. During spring migration, people have reported several days with thousands of songbirds flying overhead, and some ornithologists studied it this year. It is a relatively recent find since I *think* it was only discovered in 2017. The day I when went this year, it was cold and foggy and socked in the clouds, but several of my friends came and we had a fun socially distanced birding adventure! Trying to ID the warblers that zipped overhead was tricky but very entertaining. I’ve heard that some people think… Read more »

Calvin, that kind of thing is amazing to me–that exciting new hotspots are still being found in or near densely populated areas.

The time I heard David Sibley talk, he spoke about identifying fall warblers as they flew past at Cape May. It sounded so cool, and I’ve wanted to try something like that since, but I’ve never really done it. Now I want to search for a spot to do it around here, of course.

I spent some of my best birding days during seven seasons working at the aforementioned Whitefish Pt, MI. It was there that I developed my fascination for IDing birds in flight, as there is such a variety of vismig there. One of the very best occurrences was standing at the tip with my friend, Louie, who had waterbird counting duties that day. While scoping the lake for migrating waterbirds, he called out “Meadowlark over the water.” I found it coming toward the point, apparently after being caught over Lake Superior at dawn, as many land birds are on some days.… Read more »

Yellow Rail vismig…as a lifer…man, that is just too awesome, Tony. I still need Yellow Rail!

I have only been in the UP for like two hours (for winter birding!)–I would so love to rent a cabin and spend an entire spring around Whitefish Point someday.

Falsterbo, on the southern tip of Sweden, just across the water from Denmark, is my all-time favorite vismig experience. My wife and I birded there about five years ago. Not only is it famous for its raptors it also hosts visible flocks of passerines, pigeons, shorebirds and ducks. I’ll never forget as we stood with a few dozen of Swedes, Norwegians, Brits and more as thousands of Bramblings, Chaffinches, Larks, Tits, Wood Pigeons, Rooks and Jackdaws passed overhead, many of the pigeon flocks sparkling as they caught the dawn kight. Blue and Great Tits migrating ten feet over your head… Read more »

Oh wow, that sounds incredible. I had never heard of Falsterbo–I love learning new places like that. Yeah, I’m sure you had to learn flight ID fast that day! Too cool.

I think back to the mid-1980’s when I trudged up to the hawkwatch sites that had been established in the Sandia Mountains (spring) and Manzano Mountains (fall) by Steve Hoffman and other local birders. The hikes, especially the one in the Sandias, are steep and brushy. Not knowing exactly what I was in for, but being enthusiastic was enough for me I was eye level with raptors soaring and rushing by. When the counts were fast and furious, most of the experienced people would still take the time to explain how a bird could be identified. Yes, the differences between… Read more »

Sounds like a wonderful set of experiences. It’s a great thing about birders, how they take the time to teach even when there are so many birds around. And, oh yeah, those hawkwatches sure can get cold!