No. 6: Birds and Flight Displays

No. 6: Birds and Flight Displays

Question: What is your favorite avian flight display, or the one you would most like to see?

The American woodcock has to be one of the coolest birds in the ABA Area.

A shorebird. That lives in the woods. And has perfect camouflage. And a squiggly bill. And shakes its butt when it walks.

Not to forget the multitude of amazing colloquial names the woodcock has, several of which seem to have resisted standardization and are still in circulation: timberdoodle, Labrador twister, hookum-pake, bogsucker, bog-borer, marsh plover, whistling snipe, big-eyes, night partridge, and mud hen to name…some.

And this is all before mentioning what our beloved peenter (oh, yes—who doesn’t love the sound they make?) is almost certainly best known for: the sky dance.

Watching the sky dance is one of the essential experiences of birding the ABA Area—if you have not had the honor and someday have the chance, don’t miss it.

The phenomenon of the sky dance has been well rendered by some of the greats of American natural history writing—Aldo Leopold features it prominently in his A Sand County Almanac while Peter Matthiessen writes about the woodcock extensively in his relatively underappreciated The Wind-Birds: Shorebirds of North America.

But reading about the sky dance isn’t enough: the sky dance must be seen, and it must be heard, and it must be felt. Watching woodcocks explode from the ground and launch themselves to heaven before cratering down and becoming grass again…how do they even do it? Then there’s the teetering sound of their wings as they ascend and descend and the brisk conditions under which those early spring vigils for returning woodcocks typically take place. For many birders, the anticipation for the year’s first peent is one of the most special events of the year, only heightened by winter’s lingering chill. 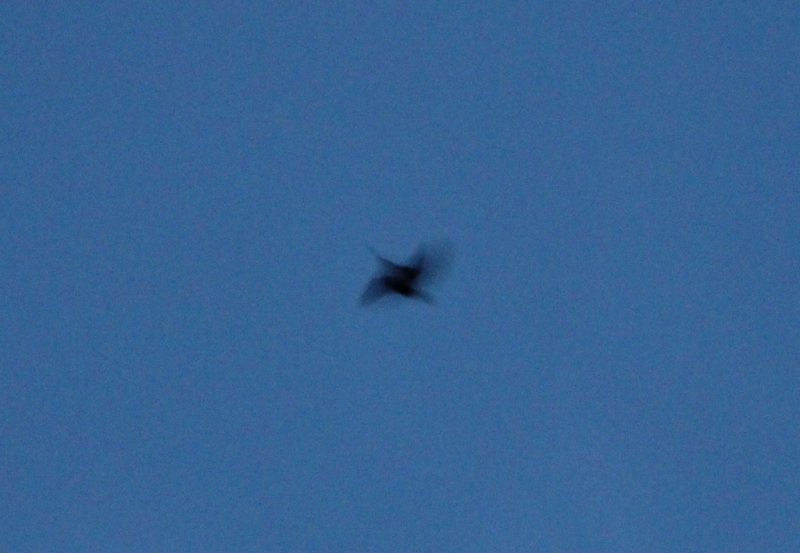 Not the easiest behavior to capture with photography, the sky dance is best appreciated in person.

Yellow-breasted chats perform a pronounced flight display, which I have yet to see and would like to. Phainopeplas are also known to be accomplished sky dancers, performing their displays over chosen nest sites to prospective mates.

I had the good fortune, during my brief visit to the Rocky Mountain tundra one morning, to glimpse the aerial acrobatics of the American pipit’s flight display, which, I confess, I hadn’t even known about until I saw dozens of them leaping from the summer snowbanks while singing their songs. And did you know that pairs of the koloa or Hawaiian duck will go on a nuptial flight, where the two birds dramatically take off and arise together before landing in sync again? That is one I daydream about seeing someday.

For many birders, a huge portion of our energy and attention is devoted to finding and identifying different species. It can be easy to forget that there is no shortage of wonderful bird behaviors we can endeavor to behold, and flight displays—some of which are famous and others of which are less well known—are some of the most striking bird behaviors we have the fortune to seek out and enjoy.

The American woodcock and its famous sky dance, glorified by birders and even literature, is tops for me, but there are so many flight displays I would still love to see, and I’m sure many more I don’t even know exist. What is your favorite avian flight display, or the one you would most like to see?

That’s another one I need to see–have you witnessed it around here anywhere, Paul?

The only place I know is the southeastern end of the lake at Glades Wildlife Management area in northern Butler County PA. I haven’t been there for many years, but I’m told that a birder did see one displaying this spring.

Frank and Paul, here’s a brief but efficient description of the experience of hearing the evocative flight display of the Wilson’s Snipe: “ . . . We were at Boulder Rez, which was our sixth birding place of the night. It was unusually hot, and the animals there were really loud, so it was harder to make out bird sounds. The bullfrogs were especially noisy. Suddenly they went silent, and I heard the spooky winnowing of a snype! I like snypes. So I was excited. Then the boisterous frogs started up again.”  Excuse me. The Wilson’s Snype. Anyhow, do you… Read more »

You continually tease and magically know this kind of “Snype” stuff, but I don’t know this one. Please tell me.

I’m going to bend the rules just a tad here in my response . . . A little less than a month ago, I was up in Rocky Mountain National Park, Colorado, where Frank saw and heard the pipits. “The other pipit,” I’ve come to think of the American Pipit–because its flight display is practically unknown, it seems, among birders. Yet so many of us know about the flight display of the much less common Sprague’s Pipit. But I digress. Anyhow, I was at the end of an actually rather birdless ramble through the Wild Basin unit of the national… Read more »

Never mind Sprague’s. My most vivid memory of the American Pipit’s flight display was near the top of Trail Ridge Road in RMNP. We were standing in a field during a substantial wind with snow flurries, and these intrepid pipits were displaying as it were a calm sunny day.