No. 5: Birds and Vehicles

No. 5: Birds and Vehicles

Question: What is your most memorable bird sighting from an unexpected vehicle?


Birders have a knack for making friends far from their homes, and then meeting up with those friends again…far from their homes. It seems only natural to make friends with a couple at Magee and then see them again two years later at Aransas, or to start a friendly rivalry with a new buddy you met at the curlew sandpiper and bump into them again at the golden-crowned warbler.

So it was when Adi and I met Jim McCoy in the Texas Hill Country while searching for the black-capped vireo. We spent the day birding together in Balcones Canyonlands National Wildlife Refuge and kept in touch via social media, and even though we had only spent a few hours together, in the summer of 2018 Jim graciously invited us to stay with him if we ever wanted to bird the Boston area.

Jim, I should mention as a brief aside, makes a cameo in Lost Among the Birds, the Big Year book by record-breaker and ABA board member Neil Hayward—be sure to read it if you haven’t already, or listen to the audiobook as I did.

I wanted to take Jim up on his offer to host us that summer, but we only had a relatively small travel window, and I was itching to plug life list holes, with one of the few East Coast species we still needed being Manx shearwater. I figured we’d need at least a few days-worth of pelagics or diligent seawatching to have even a reasonable chance, which seemed a little more logistically complicated than we could pull off, especially if we’d be imposing.

“There’s a beach here that has them in the summer. I think you could get it in a day.”

Plans were made, and soon enough Jim had us scouring Revere Beach for its Manx shearwater summer stars. Recent eBird reports suggested the bird would be a slam dunk.

We searched high. We searched low. We walked the length of the beach while dodging errant volleyballs. We climbed up cliffs that overlooked the entire sound. We climbed up other cliffs that overlooked the sound. We meticulously checked each gull and duck. We scanned the horizon and looked farther out to sea for the telltale wings of a gliding shearwater.

“There is one more area we can check—we’ll have to drive to the far side of the beach,” Jim said.

We’d put up a valiant effort, especially Jim—I was at peace with it. We got back in Jim’s car and began driving along the street that runs parallel to the beach. It was trafficky, and there were a lot of pedestrians too, so we moved slowly, and as I looked out the window #$%& *&@# @#$& that’s a Manx shearwater!

We dodged cars, I got Adi on the bird, and I took several photos. The bird was, to me at least, amazingly close in—like I almost had to yell at people in bikinis building sandcastles to get out of the way so I could see this tubenose. It soon took off and flew down the beach and out of sight. 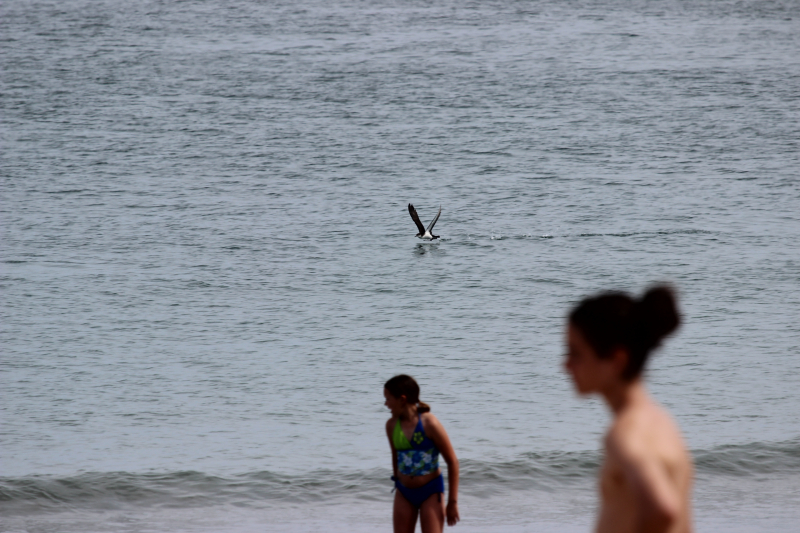 “Excuse me, can you please move so I can photograph this Manx shearwater?” 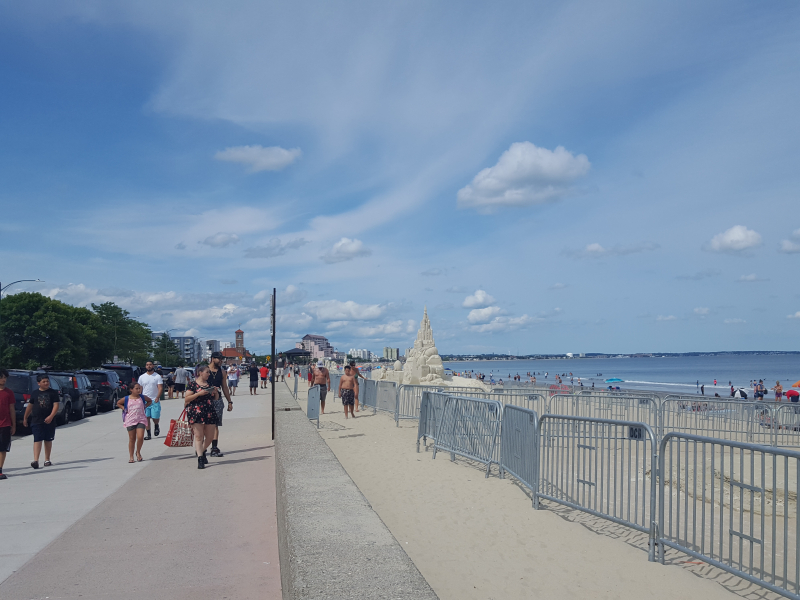 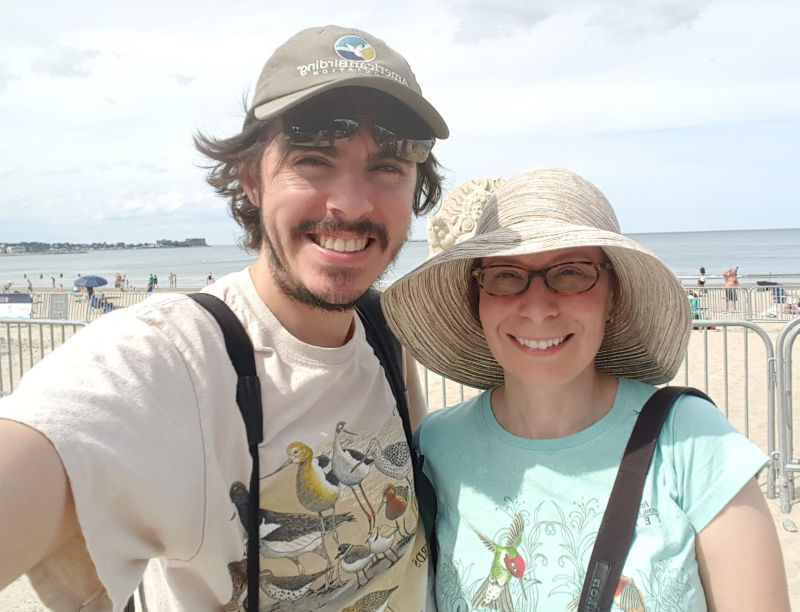 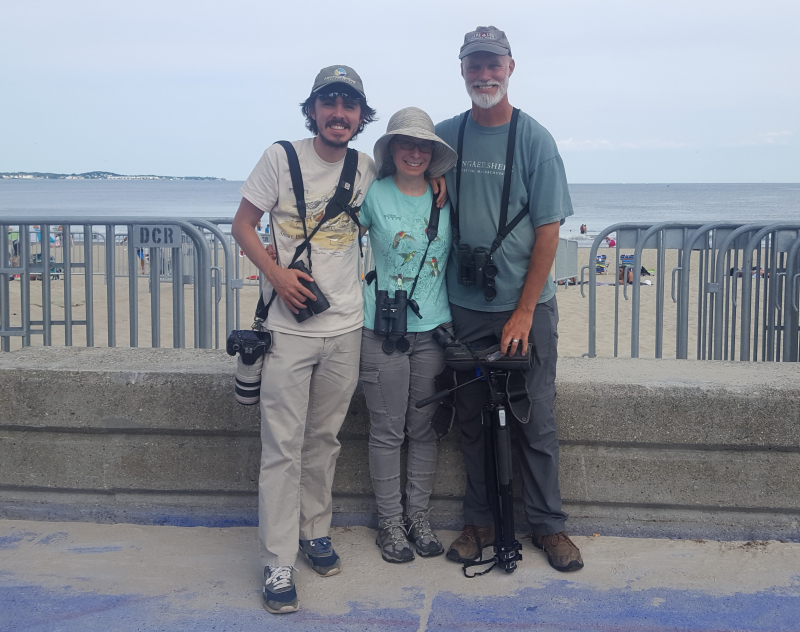 A moment later, when our bold and brave Manx shearwater charioteer, Jim McCoy, caught up with us after parking.

I always figured my lifer Manx shearwater would be from a moving vehicle, but I absolutely did not figure that moving vehicle would be a car. I think a lot of birders know that surprise is part of the joy of birding—you never know what you’ll find, and sometimes you’ll be surprised by the circumstances under which you find it too.

But maybe less reflected upon is the importance of motion in birding. Birders like birding because it keeps us in motion, and the birds are of course very often also in motion. The moment of connection, between our motions and theirs, is what gives us memories and stories we want to share.

Sometimes, as with our car-bound Manx shearwater sighting, the vehicles in which we make memorable bird observations are not the ones we would’ve imagined. I’ve heard of birders spotting macaws from airplanes and globally rare lapwings from buses, but I think our buzzer-beating Manx shearwater must be my most memorable sighting from an unexpected vehicle. What’s yours?

This happens to me so often I decided to go through my list and count them. It turns out more than 18% of my lifers were first seen from vehicles (only 5 of those from a boat). Most notable are probably California Condor and Yellow-billed Magpie (coincidentally, all three times I’ve ever encountered that magpie species it’s been from a car), but most memorable has to be the Common Black Hawk that’s been living in Sonoma County California for the past 15 years or so. I had been out looking for it on foot for over 5 hours, but it… Read more »

Man, I wonder how many of mine have been. It’s gotta be 15-20 species from a boat, and then from a car…I honestly couldn’t guess but I wouldn’t be surprised if it’s three digits.