No. 3: Birds and Resistance to Corporate Aesthetics

No. 3: Birds and Resistance to Corporate Aesthetics

Question: What birds have you seen disrupting human architectural aesthetics?

I have a confession.

I usually prefer to patronize smaller vendors, but hotel chains feel safe and clean, they’re widespread, and you can even earn some free stays.

But it goes even deeper.

I…kind of like birding on the grounds of hotel chains.

It doesn’t really make sense to me: the landscaping of the big hotel brands typically consists of lawns and a few nonnative ornamentals, which you would think would be bad birding. But somehow, I always seem to do well in those places. I love waking up in a new spot, whether after flying in or the morning after a long day’s drive, and then drinking coffee, starting a checklist, and coloring in a new eBird region.

I’ve often gotten 20 or 30 species in as many minutes just checking out the parking lot birds before continuing on a road trip. These brief birding episodes leave me feeling invigorated and like I’m somehow being productive with my travels.

So whenever I see the familiar contours of corporate hotels, it brings me—however bizarre or unexpected it may be—a small amount of comfort, because I associate corporate hotel aesthetics with good birding.

But as much as I find myself comforted by the aesthetics of big hotel brands, there is another part of me that loves whenever the monotony and predictability of corporate architectural appearances are boldly disrupted, especially by birds.

I’m sure I’m not the only one here. Isn’t it righteous when a pigeon nests on pigeon spikes? When peregrines nest in the iron heart of our cities? When hordes of crows roost in urban areas and bring the gothic straight to you? Even when Carolina wrens nest in our own garages? It’s not just funny or ironic—it’s fortifying to see birds actively breaking down the culture-nature binary.

And they do it a lot. 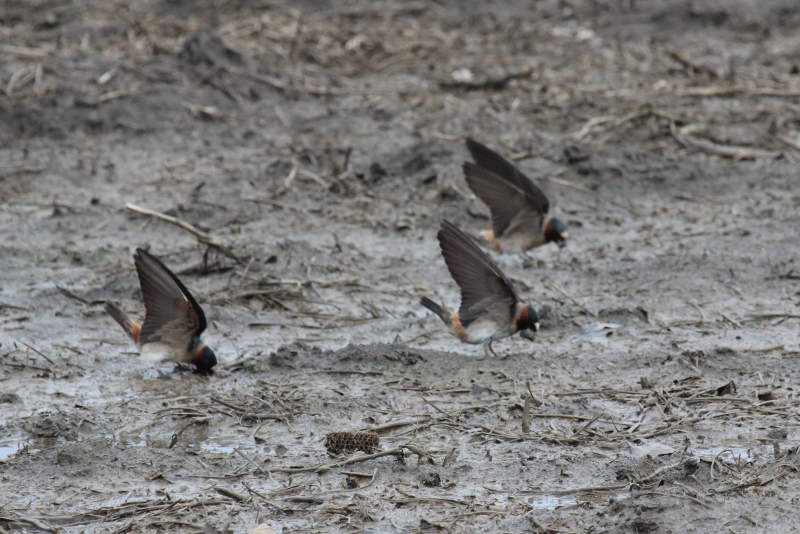 A few years ago, Adi and I had set aside a weekend for a small bird trip. Combing through my eBird stats, I saw that I had 80 species for Virginia, and I felt that with a full day racking up breeding birds in Shenandoah National Park, a place I’d wanted to go birding anyway, we could close the gap to 100, a goal I have for every state and province.

We stayed in Front Royal, where visitors to the park often do, and had a room for two nights in, yes, a corporate hotel. And it was one of my favorite hotel room stays ever.

The room, of course, was nothing special—a very standard room and hence totally forgettable. It’s what was just outside the room that was special.

Cliff swallow nests. Dozens of them, nestled between the top of the building wall and the edge of the roof. And it just so happened that several were right above our room’s window, so that by just peering outside, we would see cliff swallows flying straight toward us before veering up into their little mud homes. Sometimes things are uncomplicated—just pure delight.

The next day we had a phenomenal whirlwind birding adventure through Shenandoah. We blasted past 100 birds for Virginia, including great looks at worm-eating and cerulean warblers, and enjoyed the marvelous overlook views, not to mention the astounding number of swallowtail butterflies of various species throughout the park.

But as I think back on the trip, the highlight for me was those fantastic cliff swallows, nesting just outside our window. It wasn’t just the chance to observe the species closer than I ever had before, or the head-on angle, or the general uplifting nature of watching swallows, or the luck of the hotel choice and room assignment, although I did enjoy all those things.

The biggest thing was the way the swallows made that place theirs, disrupting the sameness—however soothing—of corporate aesthetics with…mud. And homes. And baby birds. Seeing that brought me real joy.

And although I knew cliff swallows, which traditionally build their nests on cliffs, have adapted to also nest under bridges, I wouldn’t have expected a colony on the side of a hotel. So what birds have you seen disrupting human architectural aesthetics?

I love seeing Osprey nests topping the urban-industrial waterfront of the Bay Area. They show up on giant light posts, dams, bridges, and even cranes (shipping cranes, that is). I’m never not excited about where I find them.

That’s a good one–I wouldn’t have thought of Ospreys. That is so cool they have nested on cranes–I hope they don’t get disturbed!

Check this out, Frank. I once got two life ORDERS in the SAME TREE on the grounds of a corporate hotel. Not only that, it was a hotel at an airport, and a gated one; I wasn’t allowed to leave the grounds. It gets better. They were the only two orders endemic to Africa: Coliiformes and Musophagiformes. But to answer your question, I would have to say it was the Hadada Ibises that totally owned that place. They just strutted across the manicured greens, and, believe you me, when the Hadadas want to pass, you get out of the way.… Read more »