No. 24: Birds and Directions

No. 24: Birds and Directions

Question: What is your most memorable experience with birds and directions?

Birders are pretty good at giving directions. Except when we’re not. But mostly we are! Just think of all the times we give exacting, ultraprecise instructions on which branch the Cerulean Warbler is singing from. Or which rock next to 100 other rocks is actually not a rock and is instead a White-tailed Ptarmigan. Or which little peep scurrying amid the sandbanks and heat waves is actually a Little Stint. The art of giving exact, easy-to-follow directions can be almost as important for finding good birds as knowing advanced ID skills!

And that’s just one way birders regularly give directions. I remember when I started birding, before Google Maps, how info on rarities was often accompanied by detailed directions on what highways and roads to take, with multiple versions for folks coming from different directions.

Then there were directions once you had parked and were on-site, which now typically appear on social media or eBird. It sure is nice when the bird is being seen near the parking lot, but, as I believe many birders have experienced, there are plenty of times when following the on-site directions is the most labyrinthine, arduous, demanding aspect of the entire ten-hour twitch.

The worst is that sinking feeling in my gut when I start to wonder if I’m in the wrong spot and need to retrace my steps as I watch my window of time get smaller and smaller. If the bird just doesn’t show up, fine: I can live with that. But what if I’m at the wrong giant oak tree with a downed limb growing next to the boulder with orange lichen? Maybe that’s why the bird’s not there… maybe other birders are looking at it right now while I’m sweating in the sun… maybe I should check social media, but my phone battery is low…

We remember these debacles fondly, but only after the fact, sometimes long after the fact. In May 2018, my wife, Adrienne, and I took our first and so far only trip to that beloved ABA Area birding region: southeastern Arizona. We did so well, scoring stakeout rarity after rarity, and picking up most of the regional specialties along the way, all while enjoying the spectacular scenery and adventure. Some of the rarities were fairly easy and some were hard, but among them one was particularly noteworthy for what turned out for us to be quite the direction-following misadventure.

The Rose-throated Becard is a Code 3 bird that can be found in two small regions of the ABA Area: southeastern Arizona and southern Texas. Interestingly, the albiventris subspecies is the one that occurs in Arizona while the gravis subspecies is the one found in Texas. During our time in Arizona, a pair of becards were nesting! There were so many eBird reports—clearly this would be a slam dunk twitch. I made diligent, detailed notes and as soon as we parked hit the trail running.

Well… I maybe should’ve been a bit more attentive to following those directions, since we went in the opposite direction of where the becards were. But the birding was so good! We were up to our ears in Phainopeplas—I was having a blast. But, eventually, prudence demanded we backtrack and really try to find the becard nest.

Ok, back at the car and in the hot sun desert sun. We headed in the right direction this time, or, at least, so I thought. But it didn’t seem right. We were really out in the open, following an unpaved road, and not coming up on any of the landmarks noted in my carefully compiled directions. It wasn’t all bad though: two gorgeous Gray Hawks, our ABA Area lifers, circled overhead. And I got a lifer butterfly, the Empress Leilia. There were more Phainopeplas, Lucy’s Warblers, and Vermilion Flycatchers—all good still! 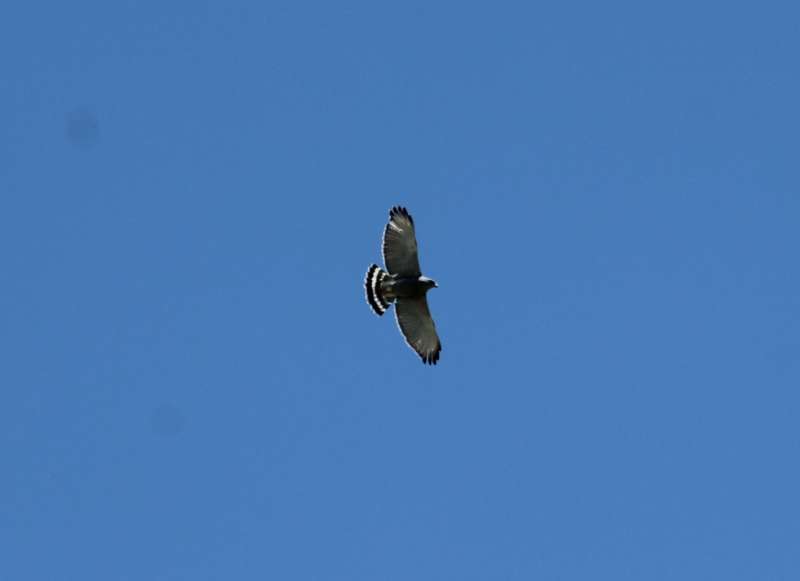 A Gray Hawk soars in the desert sun. 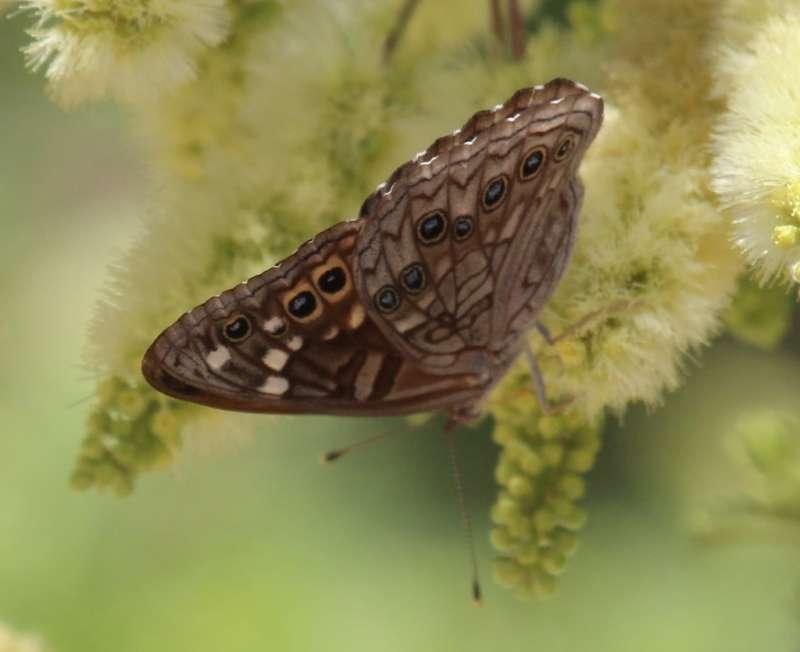 An Empress Leilia, a lifer for me. Not our quarry, but we’ll take it!

Backtrack, backtrack. Boy, was it hot. And the glare made my eyes tired, even though I had good sunglasses—that was probably the most uncomfortable part for me. We had gone right at the first junction like the directions said—why had that led us down a sunbeaten trail totally in the open? There were no streambeds, no “orange bucket lid on a pile of washed up sticks,” no green bottle and orange dog walking vest… sometimes birding seems more like a weird fever dream than a form of natural history study.

Eventually, mercifully, rejuvenatingly, we realized there was a little stream with a foot bridge we needed to cross first, and then we needed to stay to the right, which brought us to a winding path that wove through a dry wash filled with cottonwoods, both natural and manmade debris, and, most importantly, orange bucket lids and dog walking vests. Well, one of each to be precise, but never have I been so elated and energized to see an orange bucket lid, orange dog walking vest, and a green bottle. 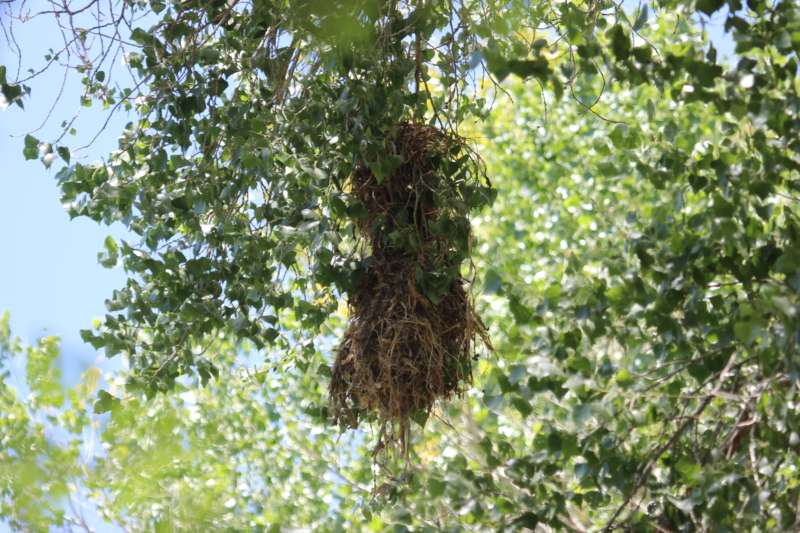 The Rose-throated Becard nest, a sighting in itself! 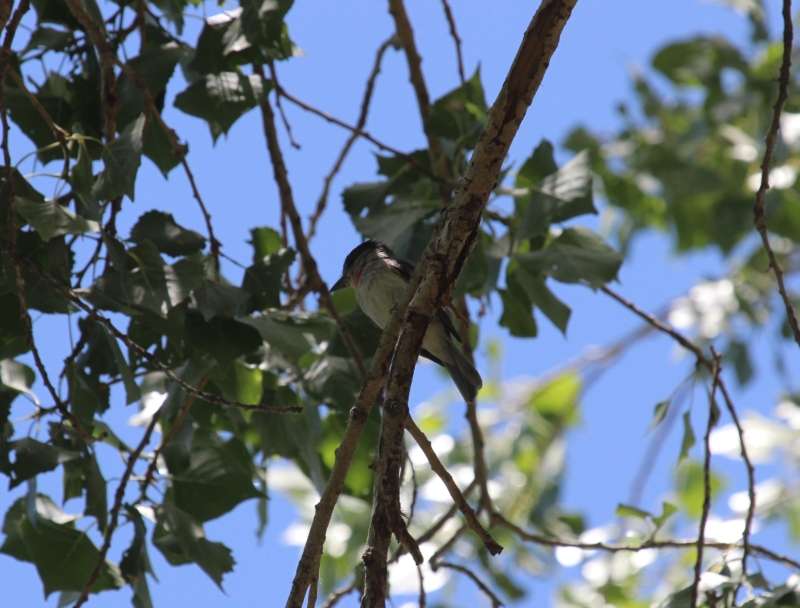 And finally, the male of the albiventris subspecies of the Rose-throated Becard, an ABA Area lifer for us.

The becards were marvelous, both the pink-throated male with its slate-gray plumage and the elegant pale cinnamon female. They were fairly high up in the canopy, so we didn’t get killer photos, but they were mostly just there, attending their nest, occasionally coming and going. We enjoyed them a great deal. And, marvelously, we could enjoy them in the shade of the dry wash, such an Arizona experience.

I wish the directions had mentioned that we needed to cross that bridge first, but mostly it was user error on my part, and we felt the hot sting of the southern AZ sun because of it. Adrienne says we walked 15 miles in total! But we got our bird, and we came away with a memory. The great Rose-throated Becard blunder is my most memorable mishap with birds and directions. What’s your most memorable experience with birds and directions?

My directions mishap resulted in a dip on the target birds, but still turned up a consolation lifer! The story is the second, ridiculously long paragraph under the Greater Sage-Grouse details. https://ebird.org/checklist/S106095055

A Cassia Crossbill misadventure resulting in Greater Sage-Grouse!!! Now that’s a good one.

While doing point-count surveys on my favorite piece of short-grass prairie in all of Colorado, I found an Ash-throated Flycatcher at the north-eastern-most point on the property. After entering my observation into eBird, I realized that this was very close to a “degree confluence” (exact point where an integer degree of latitude and an integer degree of longitude meet), so I planned to come back to bag my first visit for the Degree Confluence Project. I wrote more about this visit in my entry on the project website here: https://confluence.org/confluence.php?id=391

Hey, Matt!! Oh wow, seems like that was quite the side quest! I’m sure exploring those spaces must be a great adventure (and maybe a little nerve-wracking sometimes). Hope all’s well with you guys!

I once bicycled several miles to chase a Chestnut-sided Warbler (quite rare here in Oregon, I’ve only seen a couple), and went to the farther end of the pond. But I didn’t realize the bird had only been reported at the close end of the pond. I dipped. Still to this day it reminds me to actually read the directions and not just assume I know where the bird was.

I certainly made such mistakes in my early days of birding! I feel like sometimes we are so excited and feel like we have so much energy that those things alone can propel us to the bird.