No. 20: Birds and Winter Departures

No. 20: Birds and Winter Departures

Question: What wintering birds will you miss most from your area?

Our collective birder brains are zeroing in on one thing: spring. It’s coming. We can feel it. Just yesterday, when I took a walk in the park with my daughter, I did not find any definitely migrating species—although the juncos and robins may very well have been migrants—but just the possibility that I might find something on the move… that by itself added an extra zest to the walk.

In many parts of the ABA Area, spring migrants are already pushing north. But as new arrivals find their way to our local parks, yards, and beloved hotspots, there is also a subtraction. The wintering birds of our area slip away, beginning their own journeys north to their summer ranges.

In Western Pennsylvania, winter brings a few possibilities for exciting avian arrivals, but, as many birders know, those visitors tend to vary dramatically based on the year. Sometimes we have winter finches that spend the winter or pass through. Many of the northern owls don’t quite make it this far south, but in some years, Snowy Owls along with a few other species can be a significant presence. The third exciting winter prospect is rare gulls: if bodies of water have frozen solid up north, large numbers of the more common gulls will make their way south with some white-primaried beauties among them.

Part of what makes that winter triad—the finches, owls, and gulls—so exciting is that you can’t count on them always being there, so when they are around, you know you must savor their presence and make the effort to find them if you can. But what about the regulars, the wintering species you can always count on?

For me, the ultimate winter stalwart is obvious: I always look forward to the first Dark-eyed Junco of the year. I typically have a few pass through my yard or patch in fall migration, and then I really notice them as a regular yard presence in December. 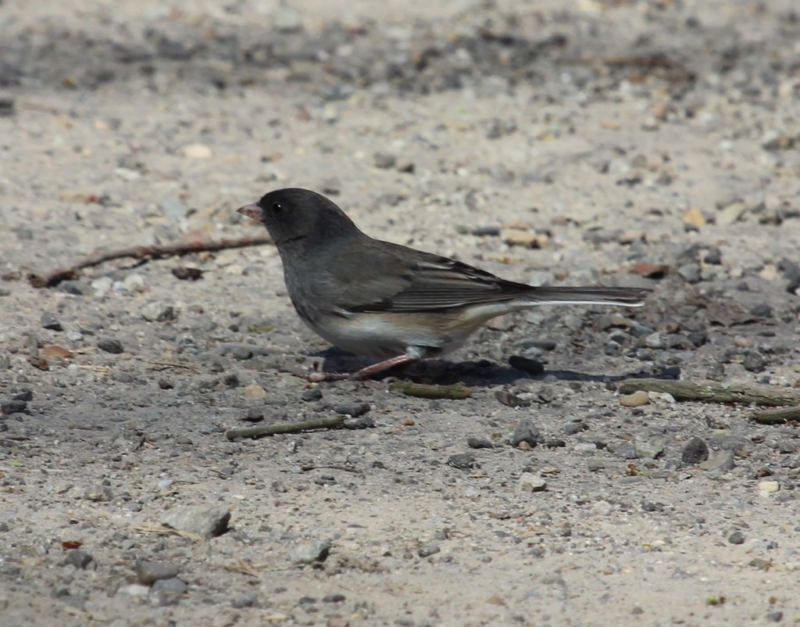 Elegant, perhaps even more so than the many elegant passerellids throughout the ABA Area.

Here in the east, of course, we mostly host the slate-colored form of the Dark-eyed Junco—the other subspecies are rare, (although worth keeping an eye out for, like cismontanus, which is occasionally detected. Surely no one can deny the beauty of the slate-colored junco: the sleek steel-gray with the creamy white belly and dramatic white outer tail feathers, plus that perfect pink bill. The Dark-eyed Juncos stay until April, when they begin peeling away and, eventually, I don’t see them in my yard or the nearby parks anymore.

Although the juncos may individually travel quite far to their breeding grounds, the species stays relatively close: you can find some in the highlands just a little more than an hour’s drive away, if you can’t quite wait until their return in the fall. Nonetheless, as it gets deeper into April, I always find myself wistfully wondering which yard junco will be my last until the leaves fall again.

A couple springs ago, I was in the midst of the early May madness, near-frantically scrambling around my patch in an effort to turn up every possible warbler, when I turned up an eBird filter-tripping bird: it was a Dark-eyed Junco! Probably just a late bird heading north from somewhere far to the south—not the biggest surprise in the world, but it did catch me off guard.

But I knew in that moment that that particular junco would for sure be my last in the county for many months. And it was. Although I had plenty of arriving warblers and other Neotropical migrants all around me, knowing that bird would be my last junco near home until fall had a touch of poignancy to it. What wintering birds will you miss most from your area?

I agree junco is the winter visitor I miss. They are widespread and become part of my winter birding. I’m always happy to see them in my yard and at this time of year they are singing which is a nice departing gift. I do go up to the mountains in the summer to visit them.

Junco just kinda seems like the obvious one for our area. But I’m interested to learn what other birds people miss most when winter is over throughout the ABA Area.

I heard a junco singing the other day too!

This doesn’t directly answer the intended question, but I’m still new enough that I’ll most miss those birds that would have been lifers if I had managed to see them this season. Ross’s, Slaty-backed, Lesser Black-backed, and (probable) Common Gulls all come to mind first. Emperor Goose is another. I have maybe a few more weeks to try for some of the gulls, but for the ones I miss, it will certainly feel like a long spring/summer before I get another chance at them. Of the birds I actually do see regularly in winter and will miss, Varied Thrush and… Read more »

Aha, I know what you mean about the agony of missing out on winter rarities and having to wait *at least* half a year for another chance, if not multiple years!

One such bird for me for many years was actually Varied Thrush, which sometimes vagrants eastward in winter, but I got my lifer in Ontario in 2019. That is actually my most recent lifebird.

Lincoln’s Sparrow: what a cool bird to have in the winter. That is one that passes through here in migration in low numbers, but is easy to miss.

I was thinking about this very matter whilst at passenger drop-off this morning at Denver International Airport. A lovely dark-morph Harlan’s hawk (our expected morph) sailed right over, “correctly” on a northwest bearing. (Harlan’s hawks breed way to the northwest of Denver.) I don’t usually see them as late as Mar. 24, and I immediately wondered if I was seeing my “LOS” (last of season).

More thoughts on LOS Harlan’s hawks (and other birds):

A morph as your most missed winter departure: now that’s cool.

A morph of a subspecies, no less!