No. 2: Birds and the Surprise of the Uncommon

No. 2: Birds and the Surprise of the Uncommon


It was one of the few eastern warblers I still hadn’t seen, and I knew there were some breeding just a few hours away.

You know how it is—the bird was practically burning a hole through my brain.

The golden-winged warbler. Such a simple name, but almost Tolkienesque somehow, the way the name evokes flight and armor and scarcity. That’s a funny thing about birds with precious metals in the name—it somehow reinforces how precious they are and how they anchor our lives, how they have no value and yet all the value.

I did the thing. I email-harassed three or four veteran birders for intel on where I could reliably see a golden-winged warbler that summer. The elders indulged, and Scotia Barrens was the answer, and on the first weekend we had a chance, Adrienne and I made the three-hour trek to plug this agonizing gap in our lifelists.

But I oddly didn’t get specifics for where exactly to look on site. I guess I felt like if I could just get to a place that definitely had the birds, I would will myself to find one so long as there were any within a five mile radius.

Of course, after hours of searching, no bird. I had a decent enough sense of the edge habitat they like, but I didn’t really know what I was doing. And even though I was a man on a mission, I still accepted the side quests: I saw my first ever white admiral, and I got what was at that time my best ever photo of a chestnut-sided warbler.

But as all birders know, hours evaporate on days like these, and we had to go soon—we weren’t staying the night and the drive back to Pittsburgh was no joke.

A familiar refrain: let’s just check that one trail we skipped on the way in, then we’ll head back. And the sound. The sound. The buzzing, punctuated and rhythmic. Is it really…? Listen. It’s coming…it’s coming closer. 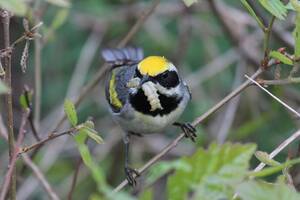 My lifer golden-winged warbler. I couldn’t have asked for better looks.

Now, in all my birding days, I have rarely experienced an encounter with a bird, much less a lifer, this dramatic.

This bird hopped practically right up to us, bee-buzz-buzz-buzzing along the trailside shrubs. It stalled just a few feet from me, and I got close-up shots I never would’ve dreamed of. We noticed a Brewster’s warbler in the tree above us too—that was also a lifer. Both birds stayed for a moment, and then were gone.

I could not understand why this bird had come so close to us, but I was not about to question my absurd fine fortune. I was so excited by my photos that as we walked back to the car I began toggling through on my camera’s screen when I noticed something that stopped me in my tracks. 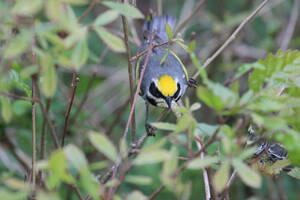 It can pay off to flip through your camera photos before heading home, apparently. How did I miss the chick?

“Adrienne…there’s a baby bird in this photo.” 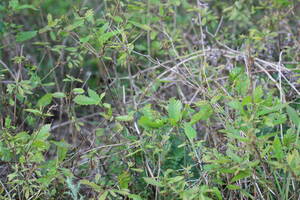 Spot anything of note here? Me neither.

We hadn’t even seen the chick, recently fledged, hiding in the bush beside us, which papa golden-winged had been feeding despite our unwitting intrusion. We walked back down the path and, with considerable difficulty, spotted the tiny chick hiding among the leaves, itself so close to being just another leaf. The caterpillars in the golden-wing’s mouth made a lot more sense now. We admired this unlikely encounter for another brief moment and soon headed home for real. I euphorically called the veterans while driving home, telling the story with as much suspense and intrigue as I could muster, and which I felt it deserved. 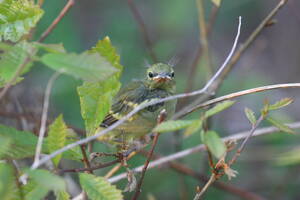 That was before we got engaged. It was after my first cancer diagnosis. But before my second.

I felt so unbelievably bad, curled up in a ball underneath the sheets of my childhood room completely in the dark, hoping to not have to move again for days. After my recurrence, I had started chemotherapy and moved back in with my parents in Miami. If I recall correctly, that particular day was three days after my most recent infusion. Those were the ones that always felt the worst.

My mom knocked on the window with her key, yelling, “I think there’s an oriole out here. Come out and look.”

I knew it wasn’t an oriole—almost definitely a male American redstart.

I didn’t want to look. I wanted to stay in a ball in the dark.

But after a couple minutes, I somehow slinked out of bed and stumbled outside. I didn’t even bother to put on shoes or bring my binoculars. 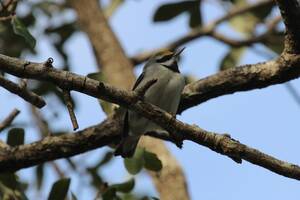 My first and only meeting with the golden-winged warbler in Florida.

It was fall migration, and there was a mixed flock of warblers in the oaks and other trees by the street. I found the male redstart, along with a female. There was a black-and-white scaling the live oak, and a couple gnatcatchers nearby, their miniscule bodies and long thin tails flickering about.

And then another bird came into view, a warbler it seemed…was that a…black bib? I walked toward the base of the tree, started pishing. It came closer, leaping from branch to branch until we were just about in a staring contest. No way. I rushed inside for the camera.

Golden-winged warbler is a regular but scarce fall migrant in South Florida, one of the most elusive of the regular warbler migrants through this celebrated birding region.

I have seen it once, on that one surprising day under circumstances I never could’ve imagined. In that way, a day that I would have otherwise wanted nothing more than to forget forever became treasured and unforgettable.

We saw many of the things birders like to see in Costa Rica: motmots, trogons, toucans, waterfalls, beaches, and sloths. We loved the tricky flycatchers too, the tyrannulets and tody-flycatchers.

At La Selva Biological Station, near the end of our time there, I raised my bins to check out something moving through vegetation at the edge of a gallery forest. I expected a greenlet or maybe one of the small flycatchers, with a real chance of it being a lifer for me or Adi.

But instead, that familiar face, a migrating golden-winged warbler. He seemed so out of place there, with a jacamar just a few feet above and an agouti below. But he wasn’t—if anything, I was. Meeting the golden-winged again, in this unexpected and yet expected place, I felt both shocked and relaxed, a feeling I’m sure many birders understand as our knowledge of birds and their places in the world manifests before our eyes. Our abstract understanding becomes anchored by lived memory.

The golden-winged warbler is an uncommon trans-Gulf migrant of conservation concern. It breeds throughout eastern and central North America, and it winters throughout Central America, with some individuals reaching northern South America.

Of course, the golden-winged warbler is much more than these things, and I don’t mean that there is more to its status and distribution or life history. I mean that this bird has faced me in times when I have least expected it and astonished me when I have expected it.

Some birds are like that, I think. You’ll live your life, and while you’re living, the bird will intersect with your own lifepath, shocking and delighting. A ballast during both the good and the bad. Not a common bird, but not a once-in-a-lifetime find either. Just a bird that always surprises you. It’s golden-winged warbler for me. What uncommon bird always surprises you?

Touching, thoughtful, and heart-warming narrative. Hope you’re completely on the mend now. I noticed that the lifer in your first image has just a touch of yellow on its chest/breast. Looks like there may be the tiniest of recessive genes from Blue Winged in that bird! This group of four (BWWA, GWWA, BRWA, and LAWA) are fascinating to search for and study all the nuances of plumage and song, and habitat preferences. Enjoy the journey!

Stephen, thank you so much for this thoughtful comment. I have had clear scans for a few years now and am extremely grateful for it.

Regarding the touch of yellow in the Golden-winged, yes, totally agree it has at least a bit of Blue-winged in it! I did not realize that for years until someone pointed it out for me–it was a good learning moment. I thought about mentioning it in the column, but it felt slightly clunky–I am glad to have you point it out for other readers.

Thank you again for reading and commenting.

Also, I saw my first and only Lawrence’s just last spring–thrilling!

I loved this piece! Your personal story is so touching, and I wish you good health forever. The GWWA story and photos were just delightful. I hope to have such good fortune sometime: we are in the second year of a Breeding Bird Atlas and this would be a pleasure to be able to confirm personally. I look forward to your next entry!

Thank you so much, Kathy! Good luck on the atlas–what state are you in? I hope you find a golden-winged!

I’m in Maryland. GWWA only breed in our farthest west county(ies), but still, I can hope!

Funny you mention Golden-Winged…I’ve only bumped into one once…I was at Parker River NWR, and at one of the stops people were gathered looking into this thicket, saying one had been seen. I waited a while and didn’t see it. I decided to loop around to this dusty road that runs in back of where that thicket is. I was walking down it when the bird burst out, crossed the street and perched exposed at maybe 15′ high on the top of some scrub. Completely shocked me.