Question: What’s your coldest ever lifer?

What comes after CBC season? For many ABA Area birders, it’s the beginning of a months-long wait—a hibernation, almost—until the euphoria of spring at last arrives.

But the vast wintery parts of the ABA Area still have their birding thrills: finch flights, owl roosts, the methodical joy of combing through geese flocks for the one that looks different, the tendency of rare birds to stay put for months at a time, and so on. Even as someone originally from South Florida, I can truthfully say that winter birding, whether in cold places or even colder places, is tons of fun. In fact, some of my favorite birding adventures have involved hopping in the car from a relatively cold place—Pittsburgh, PA, or Morgantown, WV—and driving to an even colder place: New England, Michigan, or Quebec.

So it was in January of 2018, such simpler times. The journey started, as so many do, with some casual scouring of recent eBird records. At the time, I was still missing just one of the winter finches, Pine Grosbeak, and it was practically burning a hole through my brain. eBird reports showed one or two here, another one there, nothing that seemed like a slam dunk… until I found a recent report from the northern part of Michigan’s Lower Peninsula that had a whopping 80 Pine Grosbeaks, with other reports from the same area. Reasonable driving distance… this might just work. A staked-out Harris’s Sparrow on the way in Ohio? Sometimes the journeys seem to manifest themselves into existence.

I contacted my friend and state/province listing rival Kirby Adams, a naturalized Michigander, and a plan was hatched. When we got to the Harris’s spot, the stake out turned a bit dicey as the bird failed to show for some time while a storm loomed, but eventually, good looks were had, and Adi and I were back on the road en route to our rendezvous spot and overnight resting area.

We met up with Kirby in the morning and headed to the area from where the grosbeaks had been reported, a place called Inspiration Point, notable for hosting a herd of elk and also for having habitat more characteristic of areas farther north, which is why the finches had taken an interest. We crossed a few partially iced over roads in Kirby’s trusty Forester, enjoyed a glimpse of the resident elk herd, and parked. And went outside.

I believe it was 0 degrees Fahrenheit when we began, although it warmed up later to 3 degrees Fahrenheit. Adrienne remembers it being even colder. Kirby said we had been blessed with a warm day and good conditions.

Cold is cold, even when you’re just scrambling from one building to another or into a heated car. But it’s another thing altogether when you step into the cold and think to yourself: Um, I’m going birding in this? And will be outside indefinitely? With no coffee nearby? And I chose to drive ten hours to do this? And now I’m going to embarrass myself in front of a birding rival by calling it off?

Chip notes have a helpful way of interrupting such unhealthy musings. We hadn’t taken more than a step or two from the car, and there they were. Pine Grosbeaks. At least a few dozen female-types, with three or four definite males mixed in. A long-awaited and occasionally-dipped-on lifer. We angled around the flock for decent photos as they crushed some crab apples and began moving past us. 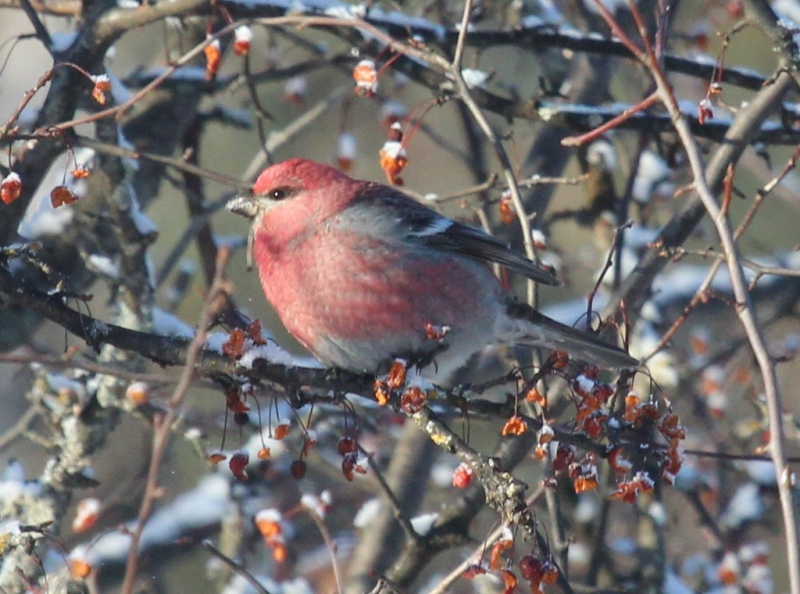 A gorgeous male Pine Grosbeak, made all the more gorgeous with its proximity to our warm car. 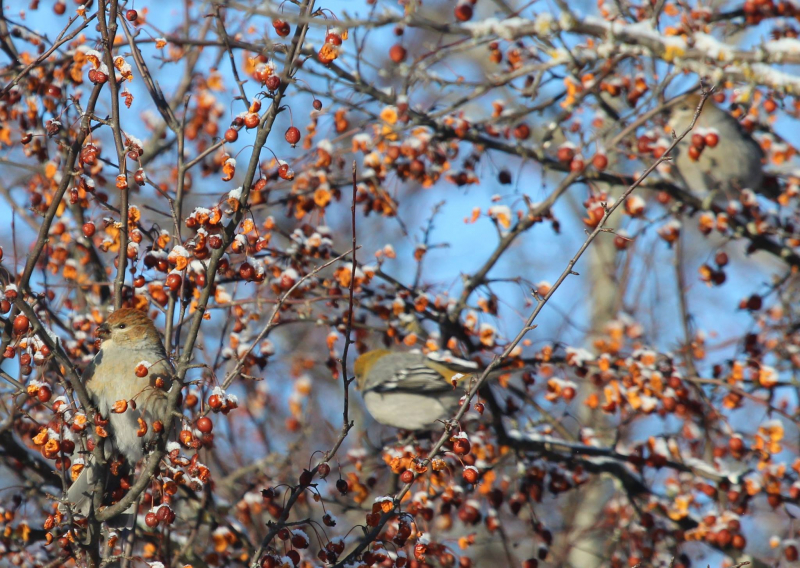 A flock of Pine Grosbeaks, unbothered by the cold, happy, focused, thriving.

We had our bird, and with absolutely minimal strain, but we braved the elements a bit longer just for the sport of it, walking and birding, oh, at least 100 meters farther. It was the kind of place where just a few steps in the snow counts as real exercise, as your body engages extra muscles to stay balanced, all while the glare of the snow tires out your eyes.

We had a Red-breasted Nuthatch, and we heard and briefly saw a woodpecker, which we tried to follow-up on to get to species level, before all of a sudden realizing we actually already had our prize and maybe we should simply be kind to ourselves and get back in the toasty car. We took a triumphant selfie and had the heater on blast in no time. 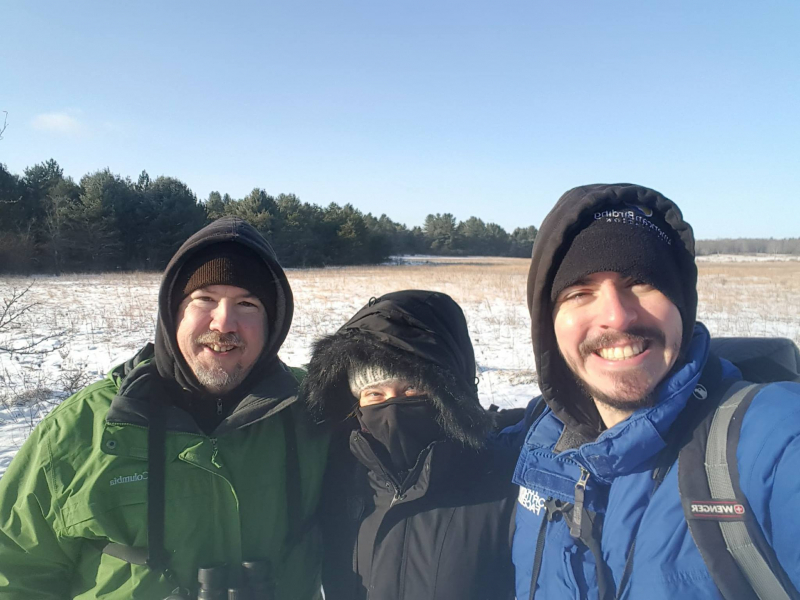 With the Pine Grosbeak under control, we headed north for Bohemian Waxwing, a lifer for Adrienne, and did so well that we had time to cross the Mackinac Bridge and briefly explore the Upper Peninsula, where spotting Snowy Owls atop barns or billboards was almost ho-hum. A great birding day I will always remember fondly.

But one of the most notable things that has stayed with me from that special day is that, as far as I can recall, those Pine Grosbeaks were the lifer I have experienced under the coldest conditions. Northern Hawk Owl in Quebec and some gulls here in Western Pennsylvania are up there, but they weren’t in single digit conditions.

One presumes that this winter will eventually become cold, and we can look forward to seeking out good birds in cold conditions. The Pine Grosbeak is my coldest ever lifer. What’s yours?

Appropriately, mine is Snow Bunting. Before a recent holiday trip to Idaho, it would have been something seen still well above freezing temperatures since nearly all of my birding experience is still in California, but it was around 20 degrees F when I drove out to the farm fields of Rexburg, ID hoping to find rosy-finches and instead found a somewhat less common flock of these pretty passerines. Luckily for me, I spotted them from the car, so it’s not actually the coldest I’ve felt while finding a lifer. My hottest lifer is somewhat more impressive: a Black-throated Sparrow seen… Read more »

That seems really im pressive to me that you managed to get your lifer Black-throated Sparrow when it was so hot since that’s a pretty common bird throughout much of its range!

I’m not sure offhand what’s my hottest lifer… it was unbelievably hot when we got Rose-throated Becard in SE AZ. So maybe that!

My coldest lifers were at Sax Zim Bog, Minnesota on a February morning that started at -16 degrees F. The birds didn’t mind the cold including 6 Life Birds: northern hawk owl, black-backed woodpecker, Canada jay, black-billed magpie, boreal chickadee, pine grosbeak. My only regret of the trip is that I never saw a great grey owl. I’ll have to go back some day.

You’ll need to go back when it’s even colder to break your record with great gray owl!