No. 14: Birds and CBC Rarities

No. 14: Birds and CBC Rarities

Question: What rarities do you look and hope for on CBCs?

We do it for the data. Kinda. Sorta? Legions of birders will soon participate in their local Christmas Bird Counts, and perhaps in some cases, CBCs far from home. But how many of us will pore over the data once it’s all in? Some of us will—I like to at least glance at it. Even though many of us derive real satisfaction from contributing data to this venerable and long-running citizen science project, that’s far from the only thing that makes the CBC so special.

In addition to the inherent satisfaction of data gathering, there are other… incentives. It’s not because we love the cold, or even the balmy weather certain sectors of the ABA Area will be enjoying. The midday potlucks or group outings to local diners aren’t it either, pleasant as they often are. The excuse to socialize and see friends we’re not always in contact with while having some birds mixed in isn’t quite it either. Let’s be honest: what we love is the thorough, methodical surveillance of our home territories for wintering rarities!

Well, maybe I’m really just talking about myself, but because so many birders will be covering so much ground in coordinated efforts, good birds—sometimes really good birds—are bound to be discovered, and I know I’m not the only one who loves the CBC for that reason. Will you find the best bird of the CBC? Get something everyone else missed? Contribute to an all-time high count? Set a new personal high for species seen? Have an awesome lifer to chase the next day thanks to someone else’s diligence? (Don’t be bad and abandon your post during the CBC!) All tantalizing possibilities, and for many birders, why we eagerly await CBC season every year.

Most of the exciting yet still realistic possibilities for CBC rarities in Pittsburgh fall under two broad categories: lingering migrants or visitors from the north. In years when severe cold fronts haven’t yet passed through, we can get birds like Hermit Thrush and Eastern Towhee, while in colder years we should be on the lookout for American Tree Sparrows and other birds that often don’t make it quite this far south, at least not in the city. The ideal, of course, is when you can find both lingering birds and newly arrived northerners.

The CBC day itself is fun, but it is not, to my mind, when most of the fun happens. It’s not seeing the actual results either, thrilling as that can be. The greatest joy is, I believe, the anticipation, when our minds run free, planning elaborate routes that will surely yield great bird after great bird: what will we find this year?

And sometimes we actually find those birds! Typically, I patrol one or more of the urban parks, and twice in recent years I’ve come across a Yellow-rumped Warbler, here a nice bird for the city CBC. Both times the bird was detected by chip note first: hey, that sounded like a… there it is! 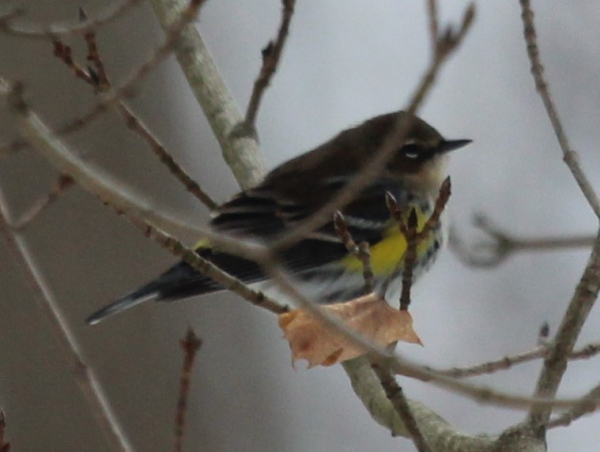 Another bird I’ve had success with is Winter Wren. They’re here, but easy to miss. Ted Floyd taught me to listen, especially at dawn, for the chip note, which is similar to that of many of the sparrows but distinct: chimp, chimp. Brambly areas with lots of fallen sticks, especially near streams, at first light (ideally after looking for owls for an hour): be there or risk missing Winter Wren! Chimp, chimp. After encountering Winter Wren in such a spot with Ted early, early, early in the morning several years ago, I have made it a point to be in that habitat before dawn in CBCs since. Sometimes nothing more than a pre-dawn pish is all that’s needed to conjure up this short-tailed shadow, the hardy Winter Wren. Chimp, chimp.

Good stories start with a good hook, but they need to end well too, and in my experience CBCs deliver there too. Memorably, there was the year when the big miss was Cooper’s Hawk—how had we not seen one?—when right at dusk, hours after our last recorded new species for the day, one swooped into a tree right in front of us, the orange rays of the setting sun shining all about it. That was outdone the following year, when Ted, Adrienne, and I had officially called off our efforts of another pre-dawn-to-dusk day so Ted could join his family for dinner. As Adi and I headed back out of the park to the car in a different direction, we heard the deep hoots of a male Great Horned Owl resonating through the winter woods, another CBC last minute marvel.

As they say, CBC success begets success: Why not a Northern Shrike on a hillside with scattered bushes? Why can’t I flush a Wilson’s Snipe in the mucky areas I invariably end up trampling through? How hard could it be to get a nice flock of Pine Siskins? These aren’t even asking for that much: Where’s the Gyrfalcon already? The fantasy birds are at least as fun to conjure up in our minds as the real birds are to see and hear.

One of the cool things about CBC rarities is that what counts as a good bird on a CBC varies widely depending where you are. A couple years ago, I read with delight a tweet from Nunavut birder Clare Kines, a guest on the ABA podcast, on how four species on the CBC was a good haul for him, with Common Redpoll being a notably better bird than Hoary Redpoll. Probably my best contribution to a South Florida CBC was a Broad-winged Hawk, although my fantasy is to someday turn up a Townsend’s or MacGillivray’s for the hometown effort. Yellow-rumped Warbler and Winter Wren are some of the birds I’ve had success with and always strive for on the CBC in my current small corner of the ABA Area, and I’ve mentioned a few others I can’t help but dream about.

What rarities do you look and hope for on CBCs?

Frank, I have two non-answers. 1. I get what you’re saying about rarities, but, for me, the bigger part of my emotional investment, if you catch my drift, is the phenomenon of the “save.” It’s the bird your sector is on the lookout for because your sector has the best chance, perhaps the only chance, at getting that bird for the CBC. You mention the Yellow-rumped Warbler; for years, there was one such place, and one place only, that consistently got that species, year after year, on the Pittsburgh CBC. It was some secret warbler place that only the longtime… Read more »

Rarities was just a word I settled on with a sufficiently broad meaning, at least in the context I’m trying to use it–saves are the best. But sometimes a staked out rarity is a save, kinda…

Anyway, I want to know where Valimont’s super secret warbler spot is now!

The best birds that I’ve had on a northern Virginia CBC were a pair of northern rough-winged swallows at a water-treatment plant on the Ft. Belvoir CBC. But my favorites have been Lincoln’s sparrows that I’ve found on two counts–I like the fact that it takes a bit more skill to pull interesting sparrows out of a field than IDing swallows flying over a settling pond. No luck with rareties this year–ravens and red-headed woodpeckers were the best of the lot.

It is so satisfying to pull out a good sparrow, especially for an important count. I have been hosting an Orange-crowned Warbler this year, including on the CBC!