Question: What bird has surprised you by how big or small it is?


We hear it a lot: don’t use size for ID. It’s deceptive, it’s too hard to evaluate in the field, even photos can be misleading, yadda yadda.

True, at least often enough to be worth noting. But we also use size as an ID aid all the time. When we look at birds, our brains are constantly, automatically evaluating the size of birds—we spend so much time judging their size relative to their surroundings, whether on purpose or not.

And it helps! At least sometimes. Judging size is an important part of birding because it quickly filters out so many possibilities. Using it as the final measure is often and maybe always dicey, but where would we be if we weren’t able to quickly narrow down the possibilities for poorly seen mixed warbler flocks or hordes of shorebirds by judging using relative size? We’d have lots more “spp.” on our hands, I suppose. We learn size fast, and we know it well.

Which is part of why it’s so shocking when birds surprise us with how big or small they are. For me, it happens all the time with Tufted Titmice. When I see a titmouse near a robin, I think: wow, I always forget how small titmice are. Then when I see a titmouse next to a chickadee, it’s: wow, I always forget how big titmice are.

And that’s a bird I see all the time! A good reminder that warnings to not use size have something behind them. 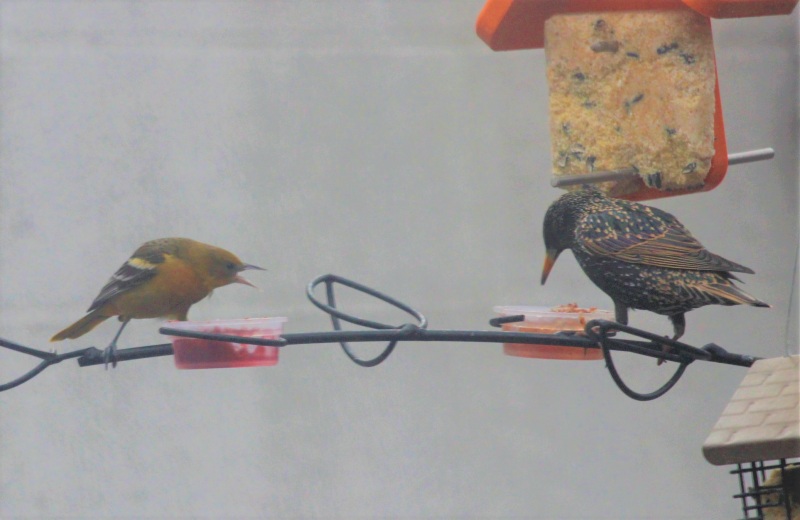 A cameo from the last column’s star: Orito, the overwintering Baltimore Oriole! One interesting thing I learned from observing Orito is how much bigger and bulkier starlings are than Baltimore Orioles, even in this photo where Orito is purposefully attempting to puff himself up.

Size becomes an even more intriguing factor for birds we don’t often see. In 2018, Adrienne and I were birding coastal New Hampshire, attempting to bring our state total to 100 species (we are competing with our friend Kirby Adams to try and see who can first get 100 species in every state and province in the ABA Area). We’d done well inland, and the coast had bumped up our numbers to something in the 90s. When we saw some other birders, we asked what they’d seen.

“There’s a Northern Gannet perched on some rocks a few pull-offs ahead, almost right on the beach. You’ll see it.”

A gannet! Wow. I’d seen gannets several times before, but always from a distance as they dramatically dove into cold offshore waters. That would be a good one for the push to 100.

And, as advertised, there it was. We made the appropriate pull-off, and the bird was calmly perched on the rocks. But even knowing what I was about to see, I was not prepared for this bird. 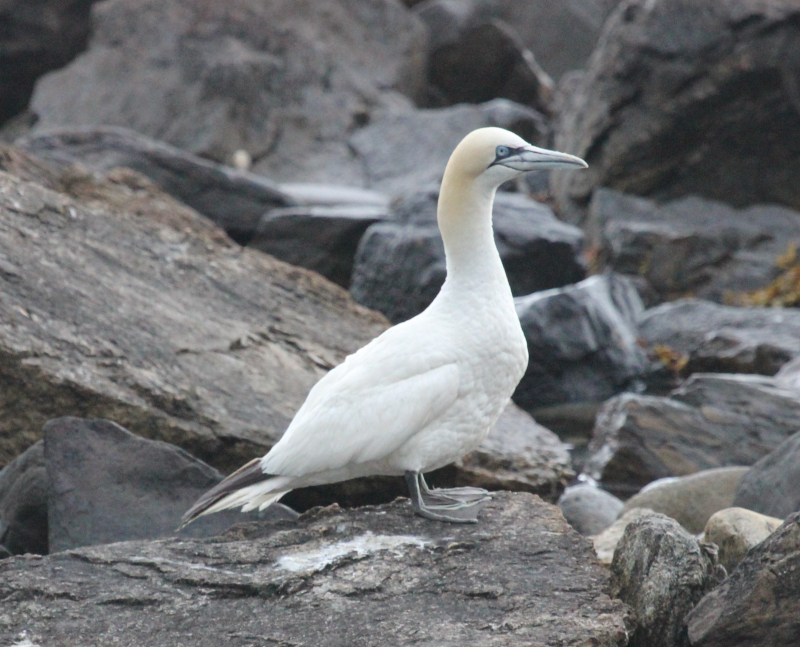 The great Northern Gannet gazes across the New Hampshire coastline with its cold blue eyes.

That thing was a beast. Huge! Did everyone but me realize how big gannets are? They are enormous. And beautiful, yes, but I simply could not get over what a massive bird this was. I suppose I was expecting something more like a petrel or frigatebird, but…no, no. Big. Even though we were anxious to get our remaining birds, we stayed and watched that bird awhile, as waves crashed against the coastal rocks and the cold sea-wind blew toward us. It was just one gannet—I know there are places in the ABA Area where you can see them in their gigantic colonies—but what a sight this one bird was for us at that moment.

I learned something that day, information that I’d glossed over countless times while flipping through field guides. But sometimes you really have to experience something to know it, and to not forget. The Northern Gannet is a big bird, almost imposing in presence. The cold blue stare and elegant white and yellow-tinged plumage add something to the effect, but the size is the thing I always remember about that close encounter.

That is the time I have been most surprised by the size of a bird. What bird has surprised you by how big or small it is?

Peeps – sandpipers are very, very small! I had a hell of a time trying to spot them because I imagined them to be much bigger.

Indeed! And I can tell you that the peeps I saw near the gannet looked very, very small!

Agreed! I was blown away the first time I saw Least Sandpipers. They were near a Snowy Egret and by comparison made it look like Godzilla strutting around a city full of tiny screaming people running frantically around its toes.

As your photo illustrates, starlings are surprisingly large! That is, my tendency is to think of them as ‘medium’ songbirds … in the league of catbirds or thrushes for example. But the reality is they are hefty birds – for example, in my experience as a bander, the average weight of a starling is more than double that of a catbird!

Large, in charge, and showing up in large numbers! Your comment just reminded me of the other thing I had been meaning to tell you–back when I was trying to figure out if Orito was male or female, I came across a banding photo from you!

This happens to me all the time, particularly with birds I’m seeing for the first time. Prairie Falcons, Long-eared Owls, and Wilson’s Phalarope were all smaller than I expected. Baird’s Sandpiper, Lesser Sand-Plover(!), and Pigeon Guillemot were bigger. But the number one bird that comes to my mind when I think of this topic is one that might be counterintuitive: the smallest bird in the ABA area. You read something like that and it can potentially feel overhyped. Like I remember the first time I saw an adult Blue Whale skeleton in a museum, and yes, it was huge, obviously,… Read more »

Hahaha, I know what you mean about blue whales! I haven’t seen one in person, but my reaction to overhead photos with a boat for comparison were similar: “That’s it? I was thought it was going to be the size of a Star Destroyer…”

Agreed with those who are saying that European Starlings are surprisingly large. Here’s a photo I took a while back of a regional-rarity Red-headed Woodpecker in Colorado’s San Luis Valley:

I haveta say, I didn’t realize until after I’d reviewed that photo that starlings are 15% more massive than Red-headed Woodpeckers.

Plus, they usually show up in numbers…