No. 12: Birds and the Magic of Overwintering Rarities

No. 12: Birds and the Magic of Overwintering Rarities

Some years ago, it dawned on me that winter was actually the best season for rarity chasing in the ABA Area. Since more birds are moving around in spring and fall, the migratory seasons have more actual rarities popping up, but the birds are on the move, so they don’t often stay around too long, especially in spring when it can often be the case that you have a day or less to chase the bird or you’re out of luck (or you decide not to chase since it’s already been around for at least two days and will soon leave, at which point it sticks for five).

But winter rarities are often the result of a bird finding a food source it considers reliable enough to risk its life for, and then it stays put until the season is over. That can give birders months to chase good birds. Summer rarities sometimes stick around for similarly long periods, but based on my casual impression, winter birds carry the day with both the wow factor and their numbers: birders are always finding incredible winter rarities throughout the ABA Area.

One of my favorite things about overwintering rarities is how tough they sometimes prove themselves to be: birds that should be enjoying the balmy weather in Florida or Mexico or Costa Rica decide they’d rather stay in Michigan or Pennsylvania or Ontario. So it was on December 20 of last year, when I spotted an oriole coming to my suet feeder in Pittsburgh, Pennsylvania. Bullock’s—or even Black-backed, as Pennsylvania birders have learned—is a real possibility here, and may even be just about as likely at that time of year. But careful observation convinced me this was a Baltimore Oriole. 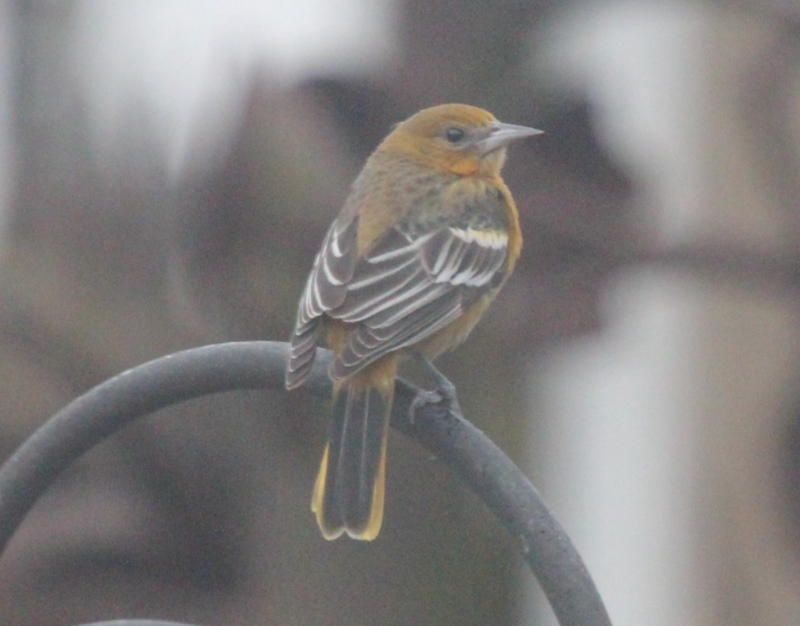 “Do you have any good photos of Orito, or just ones through the window?” Adrienne asked. “I…”

When I saw it again the next day, the question then became whether it would stick for the Christmas Bird Count. I put out jam feeders for this intrepid icterid, and it continued visiting at increasingly regular and predictable intervals, including, to everyone’s great delight, on the Pittsburgh Christmas Bird Count, the rarest bird recorded that day for the city. 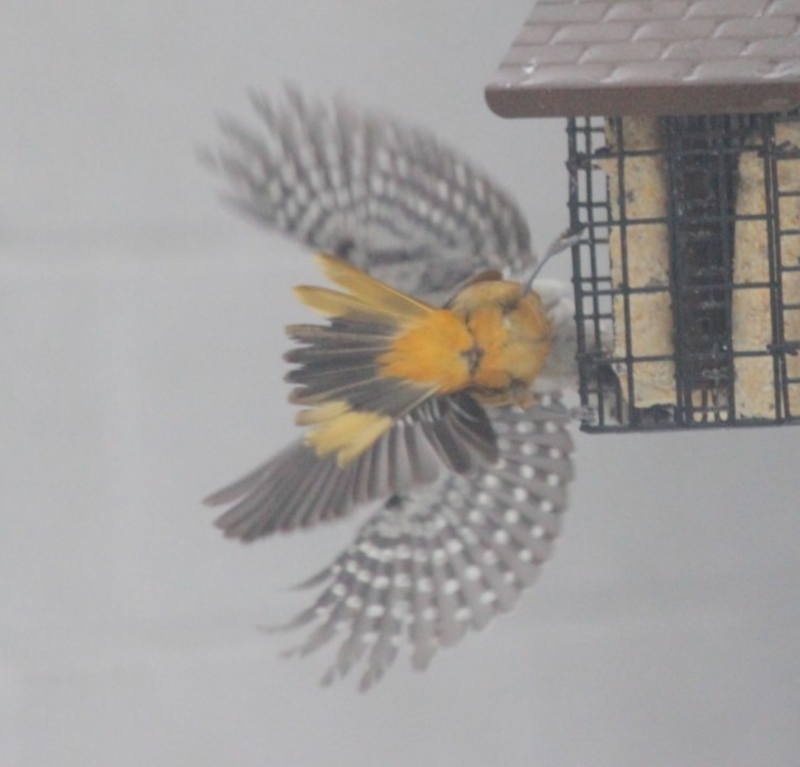 Orito shows off his tail and wing feathers!

I took many photos of this bird, including one of its tail spread open, convincing me it was a male because of the black V-shaped pattern surrounded by orange, whereas a female would have a dusky yellow tail. Adrienne and I named him Orito, and it was a delight to spend an otherwise solitary winter in the midst of a pandemic with this bold overwintering bird. The rare bird report compiler and eBird reviewer for Allegheny County, Mike Fialkovich, would periodically check in to see if Orito was still visiting, and it was always with a tinge of pride that I would respond in the affirmative. We learned what jam flavors he preferred—strawberry and, interestingly, fig, but hold the orange—and even developed a bit of community with other birders on social media hosting their own Baltimore Orioles in cold places: New York City, and, incredibly, Quebec!

Over time, we began to notice, with great excitement, splotches of black beginning to appear on Orito’s head, and, one day in early April, to my sheer delight, I heard Orito beginning to practice his song in the neighborhood. Twice, we saw him flying past us a couple blocks away from our house while we went on an afternoon walk—I suspect I may have known the stand of trees where he may have hung out when not at our feeders. Orito would fight larger starlings when they tried to bully him off the jam feeder. He was tough. 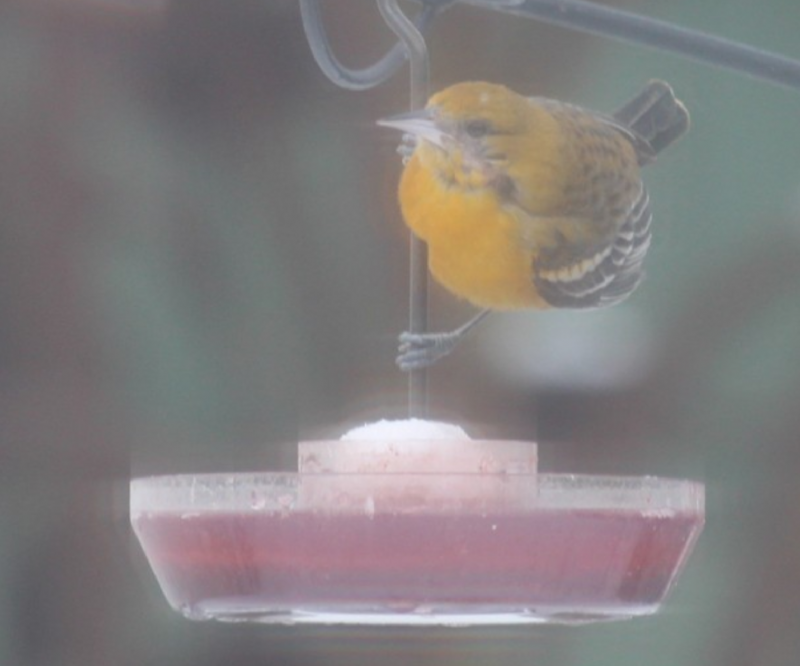 Black splotches around his face and a noticeably more orange breast…Orito was getting ready for spring.

Inevitably, long-staying winter rarities lead one to wonder: when will be the exact last day this bird will be here? Orito, with his flair for the dramatic, made it memorable. While Orito kept me busy refilling his jam feeder throughout the winter, Adrienne and I were many times busier preparing for the birth of our daughter. On April 19, we saw Orito, as we always did. The next day, at a check-up late in the pregnancy, the doctors recommended we induce, for which we needed to go to a different hospital. We stopped at home, grabbed our pre-packed bags, somehow had the presence of mind to refill Orito’s jam feeder, and headed to the hospital, where a day later our daughter Maya was born.

When we came home with Maya, we hoped she would get the chance to see Orito. The jam feeder was empty by then, but the robins and starlings had been eating from it too. I refilled it, and there was still some suet up, which Orito also liked to eat, but although we watched as faithfully as two new parents can reasonably hope to, we did not see Orito again.

Objectively, I’ve seen much rarer overwintering birds than a Baltimore Oriole in Pittsburgh. In fact, it’s not even the rarest overwintering Icterus I’ve seen in Pennsylvania: that would be the aforementioned Black-backed Oriole near Reading, Pennsylvania. And in terms of sheer audacity, I might award the male Red-winged Blackbird Adrienne and I saw coming to feeders in Algonquin Provincial Park, Ontario, the winter before—we hope he laid claim to the absolutely best patch of cattails, which he surely deserved.

But Orito stands out to me as my favorite overwintering rarity. We had the great privilege to watch him every day, see him transform into his spring form, and even learn a bit about his personality in a time when we were physically cut off from people. Now I am beginning to wonder whether he’ll return this winter, and you can be sure that if he does he’ll have a cup of jam waiting for him, but even if he doesn’t, Orito the Baltimore Oriole has the title of my favorite ever overwintering rarity.

What’s your favorite encounter with an overwintering bird?

I haven’t been birding long enough to have lots to choose from, but mine is probably a White Wagtail that waited a full four months for me to finally make the drive down to Santa Cruz to see it. We had a fun day with the whole family, the bird was super cooperative, and we even got nice looks at a Sea Otter, which was a first for me.

Well, White Wagtail is a hella good one! Wow. With sea otters? Too cool–those are two you have on me.

This is simple but heartfelt. After all these eons, I still have to go with the male Red-bellied Woodpecker I discovered in Frick Park in Feb. 1983. Hard for a youngster like you to fathom, but that was a “good bird” back in the day. After running home from Taylor Allderdice to drop my stuff off, I would then run over to Frick Park, tick the bird for the day, then run back home. Just Googled it: 3.6 miles roundtrip for the bird, not to mention the Allderdice-to-Beeler jaunt. I swear, it snowed every day the bird was there, and,… Read more »

Now that is clearly a very special and very memorable overwintering bird.

My best was the Rustic Bunting found in Golden Gate Park a decade or so ago. Very gourmet!

Now that is an exceptional bird.

My suburban yard in Alexandria, VA has hosted a single rusty blackbird twice in thirty years, in 1996 and 1999. The first time was during a blizzard, when I put seed on a covered deck so that it would be instantly buried in snow, and the second was similar after 10 inches of snow. Blizzard birds may not be quite as sexy as hurricane birds, but it made my day.

Oh wow, that is an awesome one!

I always keep my eye out for Rusties in the yard, especially in early spring when the grackles are passing through…haven’t gotten any so far. But I was thrilled the day I got one in one of my patches–nice bird for there.