Question: What is your favorite personal patch list bird or the one you’d most like to add?

Sometimes we manifest, don’t we?

It was around this time last year—on the first really cold day of fall, when you feel it in yours bones for the first time since spring—that I started thinking about what winter birds I wanted to add to the patch list.

Finches were an obvious contender, and how hard could it be to get a flock of Pine Siskins anyway? And everyone’s got their own rare owl reverie: for me it’s, more realistically, a Northern Saw-whet, and, more hopefully, a whole clan of Long-eareds.

But the one I really found myself fixating on was American Tree Sparrow. Maybe it’s because I had done so well sparrow-wise in the spring, or maybe because I’d seen so many American Trees in various places—although not my patch, where there were no eBird records—the winter before, but as I ambled along my familiar routes, I kept fantasizing about the places where one would pop up, it’s bold breast spot clear and unmistakable.

Now, I was imagining that would be with snow on the ground, the temperature in the teens or colder. That’s how you build the list in winter, right? Get out there when it’s cold and see what’s been blown down from the north.

But it wasn’t like that at all. Just a couple weeks later, on October 30, 2020, on one of those nasty rainy fall days—good birding weather obviously—I got out to the patch and tested my will to not give up, go back inside, and drink hot chocolate.

There was a big sparrow flock, filled with lingering Chipping Sparrows, arriving Dark-eyed Juncos and White-throated Sparrows, and plenty of Song Sparrows to round things out. My binocs were wet and hard to use, but they weren’t so wet that they prevented me from recognizing the big sparrow in the middle of them all as an American Tree Sparrow. There was that big beautiful breast spot, with a nice bicolored bill.

I was so happy to see that bird. I had been thinking about getting it in bitter conditions come January or February—it was only October! The bird did that thing—you know what I mean—when it’s a really good bird and the weather is awful and they kind of glow a little despite the conditions. Don’t pretend you don’t know what I’m talking about. 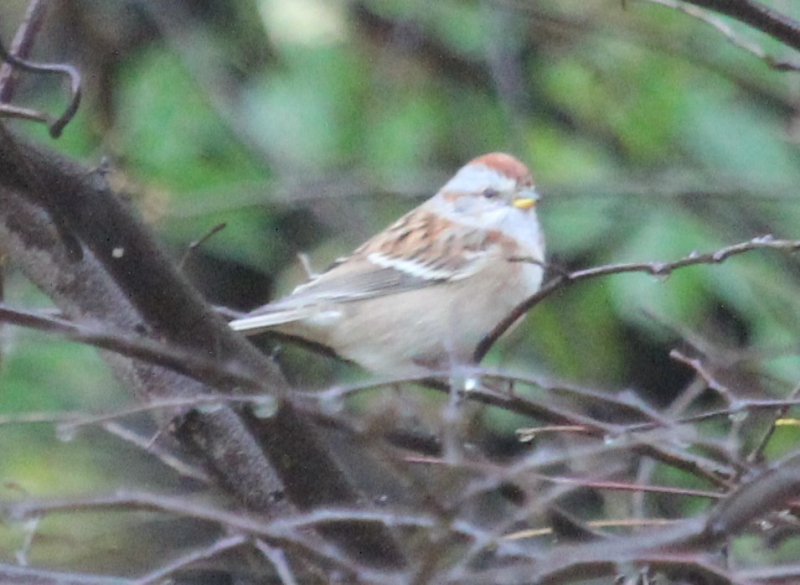 Gorgeous! Despite the photo quality…

Despite the glow, the bird, of course, stayed in some brambles while moving around a bunch and playing hard-to-photograph, until it flew off a little deeper into the woods and became impossible-to-photograph. I thought I saw it once again briefly a few minutes later, but man my bins were wet and I really could go for a hot chocolate.

I texted a friend who also patrols the patch as I left, and she came a couple hours later and looked around, to no avail. I birded the same area several more days in a row: no American Tree Sparrow.

It wasn’t rare for the county or anything—they’re not particularly hard to find in other places nearby. But it was good for the patch, and I found myself feeling more and more gratified by that.

I remembered something Paul Hess had said to me once, about how he’d rather add a new bird to his patch list (which was essentially the same as the full patch list) than find a life bird. I thought that was crazy! Who would prefer a new patch bird that wasn’t a lifer over an actual lifer?

But I enjoyed that American Tree Sparrow in a way that was a little different, different even than other patch birds I’d added earlier in the year. And I felt closer to Paul’s words.

It’s been about a year since then, and time again to start fantasizing about the patch birds we may add this winter or late fall. The American Tree Sparrow is my favorite patch bird so far. What’s your favorite patch list bird or the one you’d most like to add?

Sorry, but living in the Bay Area, I actually don’t know what you’re talking about! What is rain? I think my favorite would have to be what was all of a lifer, yard bird, and local rarity: Yellow-bellied Sapsucker. Even crazier? I wasn’t birding at all when I found it. I was working in my home office and it just showed up in my neighbor’s pepper tree, the closest plant to my window. Per eBird (which I know doesn’t have all records), it remains the easternmost county record, one of only two records within 10 miles, and the only one… Read more »

Hahaha, there goes my eastern bias distorting my perception of communal birder knowledge. Perhaps you can come to the East someday and experience the thrills of birding in 40 degree rainy and windy weather, with high humidity so you can really feel the cold in your bones!

That is awesome about the sapsucker though. That would actually be another good column topic–the best bird you’ve ever found while *not* birding. I’ll have to think if I have a good example–can’t think of one offhand.

Actually three birds – Black Tern, Gyrfalcon and Ross’s Gull – all on my bird patch – The Toronto Islands in Toronto, Ontario, Canada – been birding there for ver 40 years.

Oh wow, those are three incredible birds! Gyrfalcon and Ross’s Gull would be lifers for me, in fact.

Well, such are the rewards for those who faithfully bird their patch for many years!

I do have all three of them for Ontario but not for The Toronto Islands though I did see a Gyrfalcon on the Toronto mainland side, I was on The Islands and it wasn’t :>((.

I have a coastal walk that I call “Horton Landing to the Guzzle on Dyke”. I’ve done it 336 times now so I guess that’s my patch. On Nov. 24, 2019, I put my bins on several Song Sparrows in their regular location along a brushy ditch. A different bird was very dark with a yellow supraloral spot and allowed me to get several diagnostic photos. It was the second Seaside Sparrow on eBird in Nova Scotia since 2002. It stayed in this very specific location until January 3 and was seen by more than 30 other birders.

Oh, wow–that’s a fantastic one. So great when you find a rarity and there’s plenty of time for the community to come find your bird. I would love to bird Nova Scotia someday–I think I would love the region.

Thanks for highlighting the birding interest in a patch. Mine is a 500-acre park in northeastern Allegheny County, and the patch list is 188 species since the park opened in 1970. I saw 178 of them, and I’m eagerly waiting for our great local birders to add more. The only annoying miss of a common species is Horned Lark. There’s simply no appropriate habitat for breeders, migrants, or winterers. Loggerhead Shrike and Western Tanager, but no lark (yet).

Huh, so Horned Lark is your patch nemesis…interesting!

Maybe the question is: would you trade the shrike and Western Tanager for the lark?

Good heavens! I looked back at my old records and discovered that I had listed Horned Lark in 1971 and 1973. I have an embarrassing habit of speaking too quickly before investigating old records.

So… Of course I wouldn’t trade the lark for the Loggerhead Shrike or the Western Tanager. In fact, the park’s Sedge Wren, Clay-colored Sparrow, and Summer Tanager out-pointed the lark.

You’re due for a new Horned Lark!

Hahaha, I figured you were too shrewd to trade in your best chips for the lark, but I wanted to see how bad you wanted it…

My patch is larger than most. It’s Allegheny County (Pittsburgh as you are well aware Frank). I want to see a Sandhill Crane in the county. They have occurred several times but I have never seen them. Chances are better now than years ago since they are more common in the state just north of Pittsburgh these days. Finding it myself would be desired, but I’ll take one that someone else finds if I must.

An entire county as patch!

Sandhill Crane: that’s a fun goal for Allegheny. I think your Allegheny County Sandhill Crane will be self-found…probably a flyover as you drive home from work!