No. 1: Birds and the Surprise of the Common

No. 1: Birds and the Surprise of the Common

Question: How has one of your common birds most recently surprised you?

A few weeks ago, my wife, Adrienne, quizzed me.

“There’s a new study on what the four most common bird species in the world are…want to guess? One is pretty hard I think.”

These four birds are the only wild bird species estimated to have populations above one billion.

I played it fairly cautious, taking time to think about what some counterintuitive possibilities might be. I did get European starling right away, and although I hesitated on house sparrow, since I know they are uncommon in some of their original range, I got that pretty quickly too. I had some missteps—one of my wrong guesses was Wilson’s storm-petrel, since I remembered a friend once provocatively suggested to me that they might be the most common global species—but I eventually picked up the world’s third most common bird, and the only non-songbird in the one billion club, the ring-billed gull.

But, of course, Adrienne was right: the fourth was hard, and it took me time even with some clues. One clue was that all four species could be seen near our home here in Pittsburgh, PA. So it couldn’t be an exclusively Eastern Hemisphere bird with just mind-boggling numbers, like one of the African weavers. Hm.

Ok, what are some birds that I know can be seen on five or six continents, including right here by the Monongahela River in Allegheny County, Pennsylvania? Birds I kept coming up with were raptors, like osprey or peregrine falcon, and it couldn’t be a raptor because raptors occur in smaller population numbers by virtue of being larger predators. Maybe something introduced from the Western Hemisphere to the East? No good candidates came to mind.

And then, while thinking about which Eastern Hemisphere birds on the National Geographic poster over my desk could also be seen in the Western Hemisphere, I got it.

Who knew? The humble barn swallow, the graceful soul of open fields, is in the top 0.0004 percentile of our world’s most common bird species. Could it really be? It’s a common enough bird, sure, but Top 4 worldwide?

Then I started thinking a bit on my most dramatic barn swallow encounters: the heat wave–blurred flocks on the Dry Tortugas, drifting in on ocean breezes to swirl around snoozing noddies, and in Guanacaste, Costa Rica, when hundreds streamed past me on a sea turtle nesting beach. Plus, I knew there were various subspecies globally—eight it turns out, and any splits would certainly knock them out of the billion bird club. Ok, it was starting to make sense in my mind.

Even if it didn’t, that’s what the data suggests, and the other species that round out the Top 10 are equally intriguing—#5 was a big surprise too.

The idea of surprise is a funny thing in birding, because we expect to be surprised—that’s a big part of why we play. We like being surprised, and we aren’t exactly surprised when we’re surprised. We even take time to predict how we will next be surprised—what new birds will appear where, either as vagrants or expanding breeding populations—and then we delight in being wrong, in the surprise of it.

And if, like me, you didn’t successfully guess the Top 4 globally most common bird species, at least not with your first four guesses, you probably enjoyed that too. Maybe now, you’ll see your next barn swallow a little differently, not just as a split-tailed beauty, but as a global champion of perseverance and adaptability. I will. 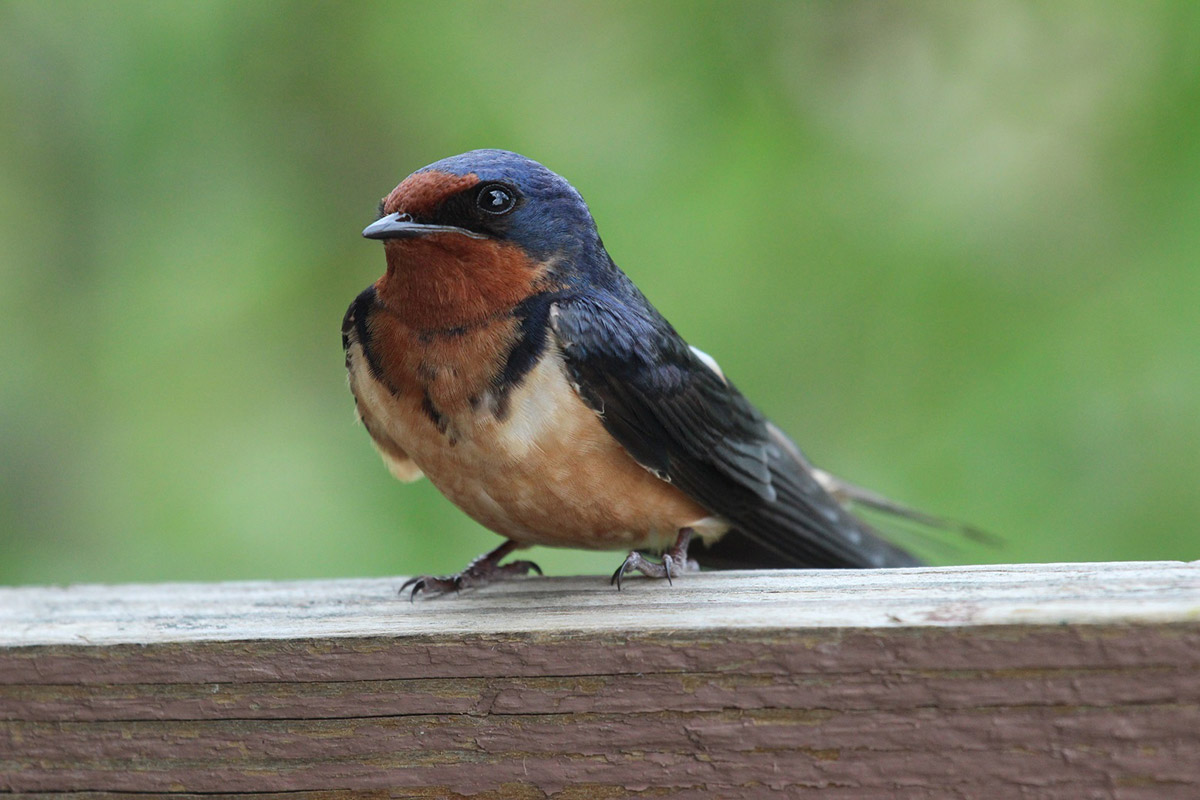 A barn swallow of the erythrogaster subspecies, one of eight subspecies worldwide, at the Magee Marsh visitor center, May 2012.

As birders, birds occupy a central part of our lives. And even when circumstances or responsibilities push birds to the periphery, they never get pushed too far—that is one thing we love about birds. They are always near. Always, and everywhere.

But it’s never really just birds, is it? There is always an “and” when it comes to birds. There is always something else. Birds facilitate our learning and interest in other fields of natural history, our introduction to aspects of environmental advocacy, culture, geography, philosophy, politics, so many things. Birds bring us joy, anticipation, comfort, worry. Birds bind people in friendship, in mentorship, sometimes even in love.

For more than two years, Ted Floyd has been building this column, an extension of his most recent book of the same name, How to Know the Birds. Ted has, for about ten years now, been a great friend and mentor to me, and it is with humility and excitement that I will be taking responsibility for the column. My intent is to honor Ted’s work—the wealth of information and insight archived here—and continue producing entries that chronicle the greatness of birds and birding with the same incisiveness and generosity of spirit.

And in that spirit, this column will be about exploring the endless ways birds blend with everything else, the many “ands” of birding. As we engage those “ands,” I hope to keep learning not just about how we know the birds, but about how birds and birding connect us to so many other things. The “ands” of birding are just as important as the birds themselves, and that’s why the title of the column, simultaneously a continuation of “How to Know the Birds” and a new beginning, will be “Birds and…”

With each new entry to the column, I want to pose a question, something to spark discussion about the many “ands” of birding that we all think about. Because if nothing else, birders love to talk about birding, including by quizzing each other on the latest scientific revelations. With the publication of this recent data analysis, the barn swallow really surprised me, and I will never think of them exactly the way. How has one of your common birds most recently surprised you?

A very common bird in Oregon I hear.

This spring I saw an Oak Titmouse foraging on the ground like a junco. Although I haven’t been birding long, I’ve observed this species over 100 times and had no idea they ever did that. It’s the only time I’ve ever seen one not in a trees or in flight.

True, it can be surprisingly alarming when a non-ground bird is suddenly on the ground! I saw a Nashville warbler in the grass last fall and was kinda astonished.

Our Grey butcherbirds will join in if I’m whistling while out in the garden. A very melodic chorister.

Oh, that is so cool! Are they a common yardbird in Australia? Seem to be pretty widespread throughout the country…

Oh, neat to see the data arranged like that.

This spring, near my home in Manhattan KS, I watched a Henslow’s Sparrow singing its hiccupy little song on Konza Prairie in a stiff breeze (10-15 mph). Normally these guys lay low if the wind is much over 5 mph. I usually can’t even hear them if the wind is blowing, and it is almost always blowing here in Kansas. This one was having a hard time balancing on the forbs and grass stems, but he was throwing that song into the wind like he was a Dickcissel or something! Oh, fantastic! Henslow’s is a favorite for me too.

Here in Pittsburgh we are just barely on the eastern edge of their range–there is a good spot for them not too far from where we live. May even write about them soon!

I really enjoyed this, but it’s worth noting that this study, at least as I understand it, is more focused on explaining a methodology for attempting to estimate the populations of all bird species rather than come up with really reliable numbers for each individual species like Barn Swallow. The estimate for California Condor is off by two orders of magnitude!

Definitely worth noting this–thank you.

My neighborhood Red-bellied Woodpecker recently surprised me by eating grape jelly from my oriole feeder and he’s becoming a repeat customer!

Patty, I had a whole jelly-based adventure earlier this year too: a Baltimore oriole wintered in our yard so I kept a jelly feeder up all winter, and it was interesting to see what other birds ate from it! European starling, northern mockingbird, and also red-bellied woodpecker were the three I noticed. Other birds came to it too as it got warmer, but I couldn’t tell if they were just eating bugs drawn to the jelly.

I’m totally with you on those “ands.” A little while back I penned this:

And here’s yet another “and.” Although I didn’t say so in that column, my whole introduction to Stephanie Seymour and her music was via you, Frank. In a wonderful review in Birding magazine. “There are birds,” Stephanie reminds us. And this: There are birds and…

I remember that one!

The “ands” is one reason I liked Birds and… as the title for my column: it’s a separate idea and emphasis than HtKtB, but also very much in the spirit of many and possibly even all of the HtKtB entries, so a continuation as well as a new beginning.

Interesting data set from that study…I had always read that the Red-billed Quelea has a population of about 1.5B and was the most abundant on Earth. That data set places the population at around 95M, or about 6% of the previous estimate. I wonder what causes the discrepancy.

Since writing this piece, I’ve heard that the methodology for the study has been questioned (of course), so it’s possible some rebuttals are already in the works.