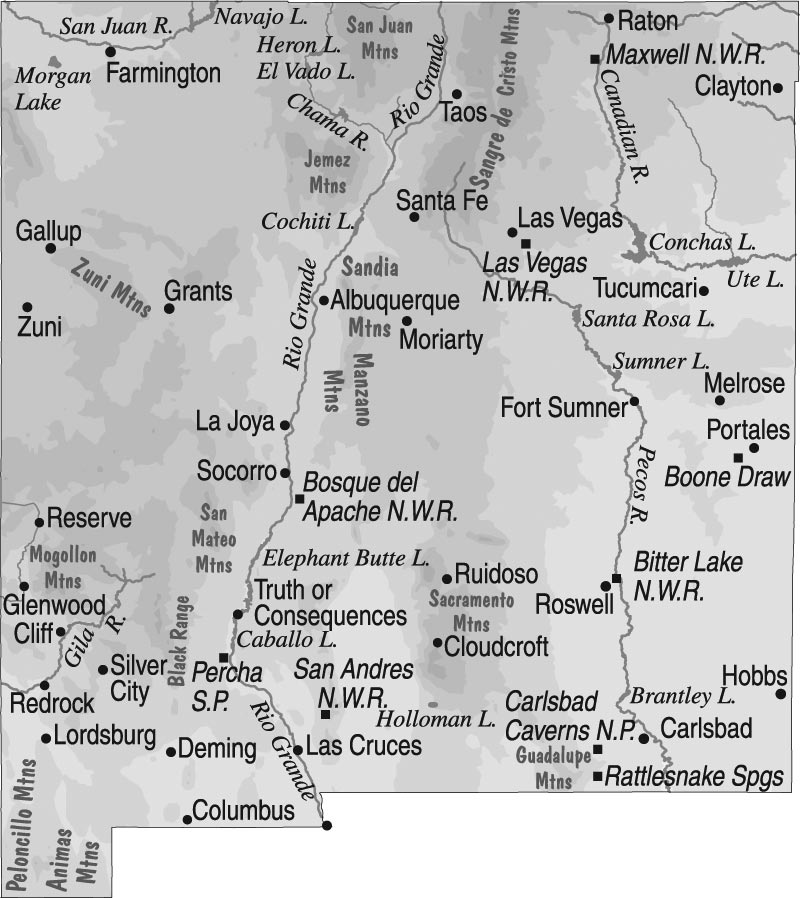 New Mexico is a single-state region in the southwestern United States. At almost 315,000 km², it is the fifth largest state and is characterized by great topographic relief (over 3145 m). The Rocky Mountains extend into the state from the north, the Great Plains from the east, the Mexican deserts and sierras from the south and southwest, and the Great Basin from the northwest. The Continental Divide traverses the state, and major rivers provide important north-south and east-west riparian corridors.

New Mexico is a land of color, diversity, contrasts, and extremes and, given its strategic location, has an avifauna to match. The state list stands at some 550 species, of which over 300 are known to breed, including ptarmigan and trogons, Boreal Owls and Whiskered Screech-Owls, Brown-capped Rosy-Finches and Violet-crowned Hummingbirds.

While acknowledging that many birds have had special significance for native peoples, the written record of bird sightings in New Mexico dates from 1540, when Coronado arrived. Among the birds noted then were cranes in native cornfields—still a familiar winter sight in the Rio Grande Valley. Ornithological knowledge grew through almost 500 years of European and U.S. colonization, military expeditions, and boundary and biological surveys. An early summation of those efforts was Florence Bailey’s 1928 Birds of New Mexico.

In 1962, New Mexico field ornithology received an important boost with the formation of the New Mexico Ornithological Society. The early 1960s also saw significant expansion of the bird program at the University of New Mexico’s Museum of Southwestern Biology, now home to a major bird collection. New Mexico began contributing sightings to Audubon Field Notes in 1948, and that tradition continues unbroken with North American Birds.

The ABA gratefully acknowledges the contributions of New Mexico Regional Report Compilers Matt Baumann, Jodhan Fine, Andrew Theus, and Raymond VanBuskirk to promoting knowledge and understanding about the birdlife of the continent.