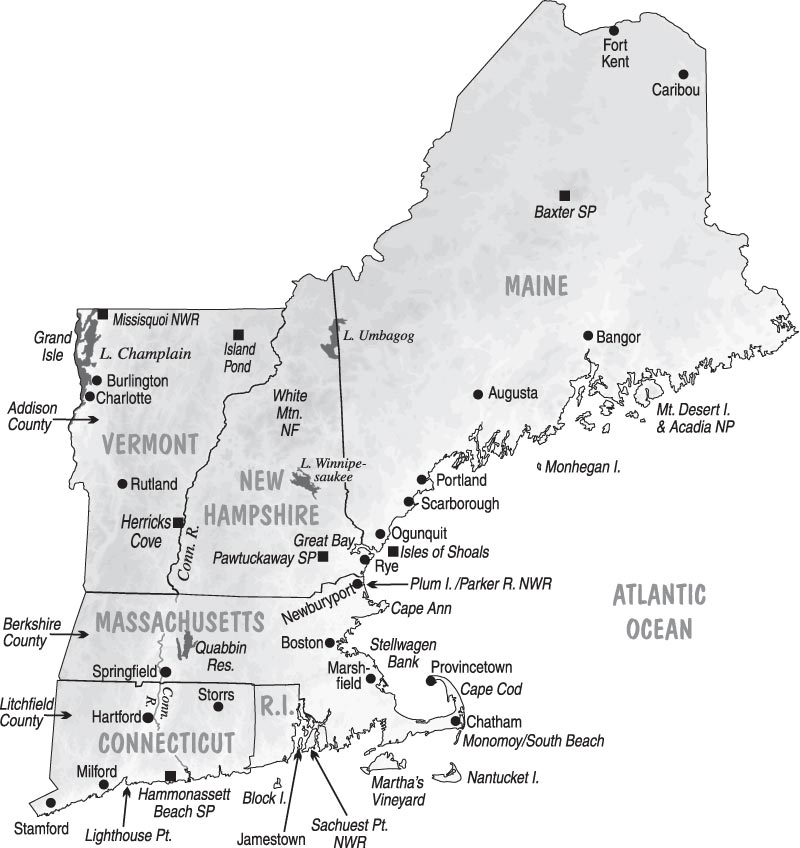 Late and generally out of season records continued a long trend, but the most notable feature of the season was a wide-ranging irruption of boreal finches. Red Crossbills and Hoary Redpolls were noteworthy, the latter especially so because of their general rarity, identification challenges and taxonomic uncertainties.

Waterfowl through Hummingbirds
A new MA high count of 7215 Snow Geese in multiple flocks was seen flying down the Housatonic Valley at Ashley Falls, Berkshire Co on 15 Dec (Jacob Drucker ph.). A Ross’s Goose from 1–16 Dec at Lakeville, Bristol Co, MA was a county first and also completed the full set of records from all 14 of the commonwealth’s counties (Jim Sweeny et al. ph.). Presumably the same bird was seen on 27 Dec in Westport, Bristol Co (Mike Nolan ph., Kim Wylie). In not much more than two decades, Pink-footed Goose has gone from an extreme rarity to an annual visitor, with reports this season of one to two from about six locations in the three southern tier states. A “Black” Brant was a good find on 1 Dec in West Haven, New Haven Co, CT (Alex Lin-Moore).

An Eared Grebe at Jamaica Pond, Boston, from 6-26 Dec was a first for Suffolk Co, MA (Ted Bradford et al. ph.). Another was present 12 Jan to 28 Feb at Marblehead, Essex Co, MA (Lydia Curtis et al. ph.). The season’s only White-winged Dove was found on 2 Dec near Clinton, Kennebec Co, ME (Ron Joseph ph.). The only report of a Ruby-throated Hummingbird, seldom confirmed In winter, was an adult male visiting a feeder in Guilford, New Haven Co, CT to at least 13 Dec (Sarah Dzielski, Nick Bonomo ph). A Rufous Hummingbird found in November at a feeder in Orleans, Barnstable Co, MA remained through at least 31 Dec (Susan Finnegan ph.). Another long-staying bird was present at a feeder to at least 5 Dec in Yarmouth, Cumberland Co, ME (Randy and Nancy Billmeier et al., phs.).

Soras lingered at three locations, all in MA; the latest was present to 16 Jan at Ellisville Harbor SP, Plymouth Co (Lisa Schibley ph.). The only Common Gallinules were two wintering at a regular location on Nantucket, with one present to at least 23 Feb (Trisha Pastuszak ph., Shea Fee). A Purple Gallinule, a species with an extensive history of vagrancy, was found in moribund condition on 18 Jan in a parking lot in Bar Harbor, Hancock Co, ME; an attempt at rehabilitation was unsuccessful (Nathan Dubrow ph.). Unexpected was a Yellow Rail found dead in the wrack line at Harding’s Beach in Chatham, Barnstable Co, MA on 5 Feb (Cape Cod Rarities ph.). A handful of Sandhill Crane reports consisted of one to five late migrants in early to mid December.

The only report of Piping Plover came from Kalmus Park Beach, Barnstable Co, MA on 5 Jan (Philip Kyle ph.). Also unique for the season was at Marbled Godwit on 2 Dec in Chatham, Barnstable Co, MA (Peter Trimble). A Semipalmated Sandpiper on 12 Dec at Plum I. represented the fifth latest record for MA (N. Landry). An unusually hardy Spotted Sandpiper was present to at least 27 Jan in Westport, Fairfield Co, CT (Jeff Kohan, m.ob., phs.). A major flight of Dovekies on 6 Dec at First Encounter Beach at Eastham, Barnstable Co, MA produced a record 6420 over three hours (BN, JT). These were accompanied by 980 Razorbills (BN, JT).

A seasonal highlight was an adult Ivory Gull passing the venerable Andrews Point seawatch at Rockport, Essex Co, MA on 2 Jan (RH); it was the observer’s 2nd in 46 years of conducting this watch. A second-cycle Ross’s Gull was seen 16 Jan only at Hammonasset Beach State Park in Madison, New Haven Co, CT (Micky Komara, Nick Bonomo m.ob.); there is only one previous state record, from 11-22 Apr 1984 in West Haven. Two Mew Gulls consisted of a first-cycle nominate European bird on 9 Dec at Green Harbor Beach, New London Co, CT (NB ph.) and a bird of the far eastern Kamchatka race on 25 Feb on Nantucket (SK ph. et al.). The former was the first of its age-class for CT; the latter was an adult very similar to one seen on Nantucket in 2014. An adult California Gull was seen from 3 Jan through the season at West Haven, New Haven Co, CT (Julian Hough, m.ob., phs.).

A stunning find at any time, a Magnificent Frigatebird enthralled observers while perched on a tower and buoys and in flight around Jerusalem and Galilee, Washington Co, RI on 28–29 Dec (Tim Metcalf et al. phs.). A distressed immature Brown Pelican was first seen on a car hood in Old Saybrook, Middlesex Co, CT on 26 Jan and relocated the next day in a cove of the Connecticut River in nearby Essex (Frank Gallo et al.). It was easily captured by state environmental staff, taken to a local rehabber and then flown to a facility in Florida. It apparently was the same bird seen on 16 Jan on the lower Hudson River in New York.

A Yellow-crowned Night-Heron lingered to 7 Dec in Stratford, Fairfield Co, CT (Frank Manlik ph.). Winter reports of Broad-winged Hawks usually prove to be erroneous, with barely a handful documented for the region, but this season produced two, both photo documented. Immature birds were at Gloucester, Essex Co, MA on 24 Jan (Jim Dillon ph.) and in Hancock Co, ME, where it was seen from 1 Jan to 6 Feb in the Bar Harbor area, Winter Harbor and Schoodic (Michael J. Good ph., Nathan Dubrow ph., Seth Benz ph. and Michele Barker ph.).

Aside from the population on the Bay State islands, the only Barn Owl report came from Sachuest Point NWR, Newport Co, RI (Michael Gow). Although there were no reports north of Concord, NH, Red-headed Woodpeckers appeared in good numbers in the southern tier, with a noteworthy high count of five on 4 Dec at a site in Salem, New London Co, CT where multiple birds were present through the season (Russ Smiley, m.ob. phs.)

A Rock Wren found in fall in Ogunquit, York Co, ME remained to at least 2 Feb (David Nelson, m.ob. phs.). Sage Thrashers were quality finds In Hatfield, Hampshire Co, MA from 13 Dec through the period (Theresa Gessing m.ob. ph.) and in Hinsdale, Cheshire Co, NH from 19 Dec to 6 Feb (Cory Ross ph. m.ob.). In a season in which the Canadian Maritimes hosted at least seven Redwings, ME had two. One was present from 29 Jan to 22 Feb at Capisic Pond Park, Cumberland Co (Brendan McKay m.ob. phs.), and another was reported from private property in Pigeon Hill, Washington Co on 8 Jan (Chris Michaud phs.). The lone Townsend’s Solitaire was on private property at Nauset Heights, Barnstable Co, MA on 7 Jan (Mike O’Connor ph.). There were five Varied Thrushes, two each in NH and RI and one in MA.

Hoary Redpolls were remarkably widespread, with multiple reports from all states. Red Crossbills were numerous; for example MA had reports from every county with some triple-digit counts. Single Clay-colored Sparrows were in NH and RI. A Spotted Towhee was found in Rockport , Essex Co, MA on 20 Dec (RH ph.). Five Bullock’s Orioles, all at feeders and some continuing from fall, consisted of two in CT, two in MA and one in NH. After a record in October 2020 in Hampshire Co, MA scored again with a Brewer’s Blackbird carefully managed for observers on private property in Bristol Co on 8-10 Dec (Joel, Andy & Matthew Eckerson ph.).

Ovenbirds, which have overwintered successfully, were reported this year from Portsmouth, Rockinghan Co, NH (SM et al. ph.); Woods Hole, Barnstable Co, MA (Mike Tucker ph); and New Haven, New Haven Co, CT (Jackson Smith et al. ph.). After late and heavy fall movements of Tennessee and Cape May Warblers, winter numbers were at least 12 Tennessees and seven Cape Mays regionwide, including one of each through the season and into April in an urban micro-climate in Norwalk, Fairfield Co, CT (FM m.ob. ph.). The farthest north were a Tennessee at Hallowell, Kennebec Co, ME on 2 Dec (Pamela Bruno ph.) and a Cape May in Essex Junction, Chittenden Co, VT on 3 Dec (Larry Clarfeld ph.).

Unique for the season was a Yellow Warbler on 4 Dec at Niles Pond, Essex Co, MA (Suzanne Sullivan ph.). Black-throated Blue Warblers, not noted for winter appearances, were well-represented with singles from 1-4 Dec in Bath, Sagadahoc Co, ME (Robert Gardner ph.); from 19 Dec to 6 Feb at Rye, Rockingham Co, NH (Pamela Hunt et al. ph.); on 6 Dec in Somerville , Middlesex Co, MA (Kathy Dalton ph.): and 11 Jan on Nantucket (SK ph.). Four Yellow-throated Warblers included three in MA and one in ME. Townsend’s Warblers, annual in the region in late fall and early winter, consisted of two in MA and one in NH.

An adult male Scarlet Tanager visited a feeder in Wallingford, New Haven Co, CT on 23 Dec (Jeffrey Cameron). There were two Western Tanagers in ME and one in MA. Lingering Indigo Buntings were in Westport, Fairfield Co, CT on 18 Dec (TG) and in Wellfleet, Barnstable Co, MA on 30 Dec (David & Frances Clapp ph.). The only Black-headed Grosbeak stayed from 23 Jan to 13 Feb at Capisic Pond Park, Cumberland Co, ME (John Lorenc m.ob., phs.); one of the Redwings was found while birders waited for this rarity to appear. Painted Buntings were reported from Barnstable Co, MA on 13 Dec and beyond (Kieran Barlow et al. ph.) and at Westerly, Washington Co, RI on 1 Jan (Tim and Erin Metcalf ph.). Dickcissels, with 14 records spread over all six states, are now at best a minor rarity. 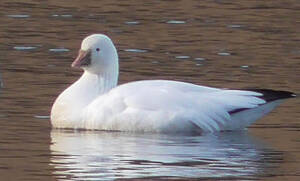 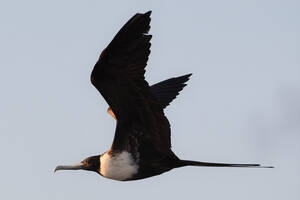 Returning from an uneventful trip to Block Island, Tim Metcalf was stunned on 28 Dec 2020 when the ferry’s route to its berth near Galilee, Washington Co, Rhode Island, revealed a Magnificent Frigatebird perched and in flight. The bird, seen by several observers, was also present the next day. Photo © Tim Metcalf.

A Brown Pelican, first seen on the lower Hudson River in New York, was found in distressed condition on 27 Jan 2021 in a cove of the Connecticut River in Essex, Middlesex Co, Connecticut. It was captured and taken into rehab. Photo © Frank Gallo. 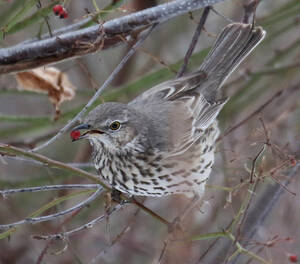 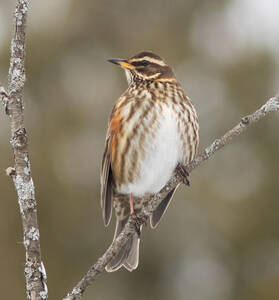 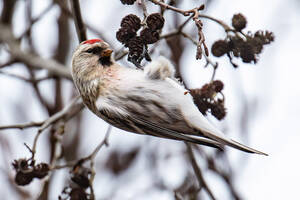 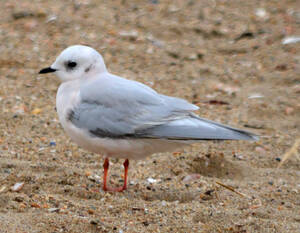