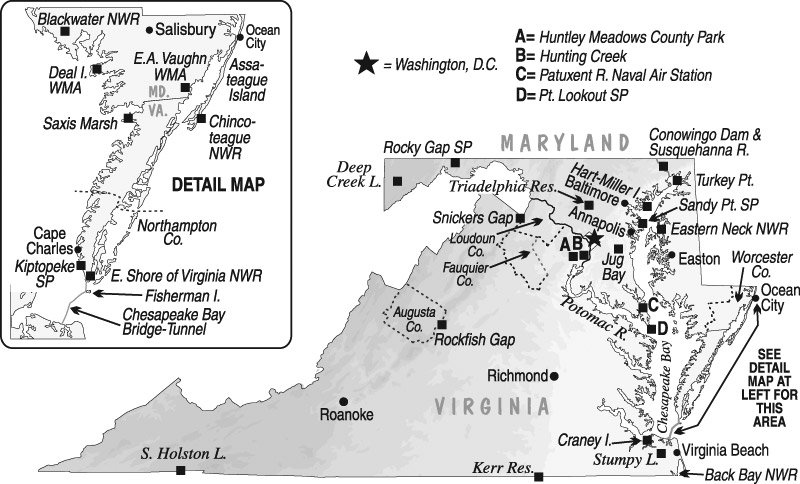 This region comprises the State of Maryland, the Commonwealth of Virginia, and the District of Columbia. It has been inhabited by indigenous peoples for at least 12,000 years and was later at the heart of European colonization and the founding of the United States. The natural sciences, including bird study, have a long history in the region that is rooted in the region’s historic colleges and federal institutions.

The region covers 55,250 square miles, spans 143 miles of Atlantic coastline, and is home to 15.3 million people. Along with the extensive coastline, prominent geologic features of the region include the central Appalachians and the Chesapeake Bay, which is the largest estuary in the United States. Temperate forest is the dominant habitat across the region, though increasing development and fragmentation have significantly reduced its extent and quality.

Several metropolitan areas in the region have served as incubators for modern birding, and that is especially true in Metropolitan D. C., which combined with Fairfax (Virginia), Montgomery (Maryland), and Prince George’s (Maryland) counties have submitted more complete eBird checklists than have 23 U. S. states as of late 2020.

The Chesapeake Bay and its major tributaries offer crucially important waterbird habitat. They offer excellent birding opportunities in all seasons, as do many miles of undeveloped barrier islands and their associated seaside bays on the Eastern Shore. In large part because of its peninsular and coastal geography, the Eastern Shore is has hosted many vagrants. In the Appalachian Mountains, species that are otherwise more northerly in distribution (e. g., Black-capped Chickadee, Dark-eyed Junco, Black-throated Bleu Warbler) make use of the higher elevations for breeding, which vagrants sometimes appear in the mountain valleys. Being along the “middle” portion of the U. S. East Coast allows the Middle Atlantic to benefit from the bird diversity of much of the eastern half of the ABA Area.

The ABA gratefully acknowledges the contributions of Middle Atlantic Regional Report Compilers Daniel Sloan and Ellison Orcutt to promoting knowledge and understanding about the birdlife of the continent.