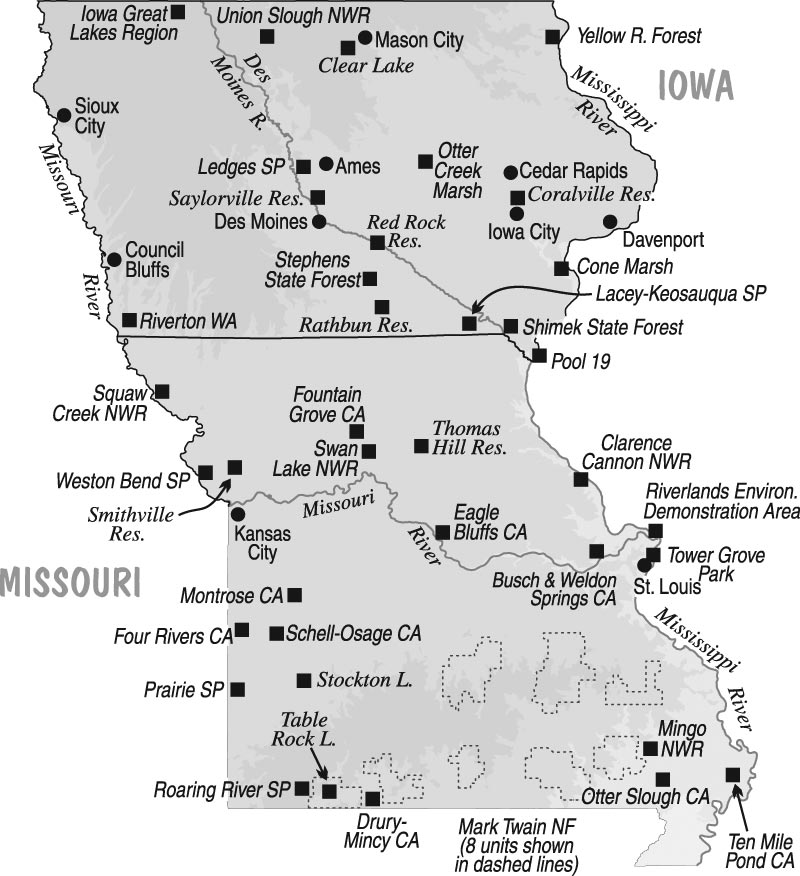 Overall, both states had fairly typical summer weather. In June, temperatures and rainfall were average in Missouri although parts of northern and western Missouri had 12 inches of rain on 28-29 June leading to flooding on several rivers. In Iowa, June was fairly warm with dry conditions across much of the southwestern two thirds of the state and especially in southeastern Iowa.

July was hot and dry with above-average temperatures in both states, topped by triple-degree temperatures in Iowa on 21 & 22 July and on four consecutive days in St. Louis, with a high of 108 degrees on 22 July. Large parts of both states experienced mild to extreme drought during July although both had several severe rainfall events and localized flooding.

Now almost an annual event, Black-bellied Whistling-Ducks again were found in the region. Other regional highlights were a Wood Stork in both states, the region’s third summer record of Lesser Black-backed Gull in Missouri, and the occurrence of more than 200 Henslow’s Sparrow territories at two Iowa sites. This year a third Iowa site which had more than 300 Henslow’s Sparrow territories in 2016 was named a Globally Important Bird Area for the species.

The region’s only White-winged Dove was one in Bronson, Woodbury, IA 12 Jun (Tucker Lutter, ph.). Missouri had eight reports of Black-billed Cuckoos from five counties, all in the northern half of the state (m.ob.). Greater Roadrunners were found at three sites in Taney and two in Greene in sw. Missouri (m.ob.) where expected and one at Eminence in Shannon (JRu) near the eastern edge of its range. The only King Rail was one near Grand River W.A., Ringgold, IA 5 Jun (†Timothy Swartz). Rails were widely reported in Iowa with as many as 9 Virginia Rails in 16 counties and up to 6 Soras in 18 counties (RV, m.ob.). Common Gallinules were found in five Missouri and 12 Iowa counties (m.ob.). The most were 21 birds including five broods at Upper Miss. River N.W.R., Jackson 17-29 Jul (John Longhenry, LGR, TM, m.ob.). Missouri’s only Sandhill Cranes were one or 2 at Loess Bluffs 6 Jun-31 Jul (Don Merz, m.ob.). In Iowa, Sandhill Cranes continued to do well with reports from 19 counties including broods in six (m.ob.). The most were 21 at Upper Miss. River N.W.R., Jackson 24 Jun (TM).

The region’s usual summering Common Loons included 3 at Spirit L., Dickinson 5 Jun (Derek Bakken) and singles at Pleasant Creek R.A., Linn 2, 5 Jun, 17 Jul (BC, JF, BSc, LGR), Ventura M., Cerro Gordo 22 Jun-27 Jul (RG), and Trumbull 31 Jul (LAS) in Iowa, and 2 at Stockton Dam, Cedar 13 Jun (RH) and one at Kellogg Lake P., Jasper 29 Jul (JH) in Missouri. For the fourth summer in the last eight, Wood Storks were found, this year in both states. In Missouri, one was at Schell-Osage C.A., Vernon on 29 Jul (†RH). Iowa had its third ever and its first since 2007 when a juvenile was found at Dunbar Slough, Greene 29 Jun-15 Jul (†DCH, ph., †Tyler Harms, ph., SJD, ph., †AB, ph., †JB, m.ob.). The region’s only Neotropic Cormorants were all in Missouri; one at Shell-Osage C.A., Vernon 25 Jun, 22, 29 Jul (m.ob.) in western Missouri where rare, and 2 at Grand Tower Island in eastern Missouri 8 Jul (BJ, SM, DM) and one there through 29 Jul (AG). The region’s only Anhinga was one at Grand Tower Island 5-20 Jul (AG, KM). Double-crested Cormorants and American White Pelicans again nested at the Clinton spoil islands, Clinton, IA (fide SJD). The 420 American White Pelicans at Grand Tower Island 7 Jul (MH) was a high mid-summer count for Missouri.

Least Bitterns were found in 21 mostly northern Iowa counties (m.ob.) and eight counties in Missouri (m.ob.). The highest count was 16 at Loess Bluffs 20 Jun (Darrin Welchert, MN). The 900 Great Egrets at Grand Tower Island 25 Jul (AG) was a high count for Missouri. Snowy Egrets were found at Missouri’s major rivers and wetlands throughout the summer; the high count was 75 at Grand Tower Island 25 Jul (AG). Iowa’s only Snowy Egret was one in Fremont 21 Jun (Chuck Fuller). Little Blue Herons were found in 18 mostly eastern Missouri counties but west to one in Livingson 28 Jun (John Zempel, Linda Zempel) and 3 at Loess Bluffs 21 Jul (Mac Williams). High counts were 50 at Coon Island, Butler 13 Jul (AG), and 50 at Grand Tower Island 25 Jul (AG).  Missouri had numerous reports of Cattle Egret including 3 at Muskrat L., Buchanan 4 Jun (TN) and a high count of 70 at Coon Island C.A., Butler 26 Jul (TJ). Iowa’s only report was one in Des Moines, Polk 5 Jul (DBr). Iowa’s only Yellow-crowned Night-Herons were an adult and juvenile at Ames, Story 27 Jun (m.ob.) and a juvenile there 16, 18 Jul (m.ob.). All ibis reports were from Missouri; an immature White Ibis at Grand Tower Island 11, 20 Jul (PM, SM, DM, KM) and a White-faced Ibis on Firma Rd., St. Charles 3 Jun (JRk, DBr) and 3 at Horton Four Rivers C.A., Vernon 25 Jun (PK).

Ospreys had a good year in Iowa with 47 young produced in 23 successful nests (Iowa D.N.R.). In Missouri, Osprey nests were found in Randolph (TE) and on Osprey Tower, Dade (CB, JH).

Mississippi Kites continued to do well in Missouri with reports from along the Mississippi /Missouri river corridor and to the south (eBird). The 28 soaring over Little Creve Coeur M., St. Louis 17 Jun (JM) were the highest count. In Iowa besides kites at their usual sites in Ottumwa, Wapello (JLF, BSc, LGR, MP) and West Des Moines, Polk (AB, RJT), a pair was seen copulating in Grinnell, Poweshiek 10 Jun (Ken Saunders, ph.). Both states had reports of what were probably early migrant Northern Harriers (m.ob.). The only suggestion of breeding was possible pairs in Palo Alto, Worth, and Trumbull in n. Iowa (LAS, AB, CJF). Rare in Missouri in summer, the region’s only report of Sharp-shinned Hawk was one at Painted Rock Rd., Reynolds, MO 30 Jul (JRu). Rare north of the Missouri R. in Missouri, 2 Broad-winged Hawks were at Thousand Hills S.P., Adair 6 Jun (PK) and singles were at Deer Ridge C.A., Lewis 8 Jun (JRu), Crowder S.P., Grundy 10 Jun (June Newman, Edge Wade), and Kansas City Int. Airport, Platte 23, 25 Jul (Evan McKay, Ryan Salsman). Each state had only one Swainson’s Hawk; in Urbandale, Polk, IA, 26 Jun (DA) and at the Kansas City Int. Airport, Platte 12 Jul (Jon King).

Iowa had a record year for Barn Owls with 22 nests in 15 counties and birds which may have been nesting reported from 10 additional counties. The nest total eclipses the old record of 17 in 2016 (BEh). Barn Owl reports in Missouri included active nests in Cape Girardeau, Clinton, and New Madrid (AG, CMc, MN, BJ). A pair of Red-bellied Woodpeckers feeding young at Gitchie Manitou S. Pre., Lyon 18 Jun (DA) was in northwest Iowa where this species is rare. Yellow-bellied Sapsuckers were found across northern Iowa, south along the Mississippi R. lowlands to Muscatine, and along the western border south to Woodbury (m.ob.). The 26 near Lansing, Allamakee 7 Jul (Connor Langan) was the high count. Eleven of Iowa’s 18 Peregrine Falcon nests were successful and produced about 24 yg. (Iowa D.N.R.). Most of the nests were along the Mississippi R. Three Peregrine Falcon fledglings were banded in Kansas City, Jackson (MN). All other Missouri peregrine sightings came from the Kansas City and St. Louis areas, with 3 in St. Louis 15 Jun (JM) being the most.

Brown Creepers were found in the Mississippi R. lowlands in Clayton, Scott, and Louisa in Iowa where they nest (KJM, et al.). Rare in summer, up to six Sedge Wrens were at Riverlands 25 Jun-31 Jul (Nicholas Renz, m.obs.). Up to 3 Marsh Wrens were found in nine counties in Missouri (m.obs.), all north of the Missouri R. except for one at Valley Water Mill, Greene 8 Jul (JH, Brooke Widmar) in southwest Missouri. Iowa’s only Bewick’s Wren was at its usual hangout near Argyle, Lee 7 Jun (DTh). In Missouri, up to 4 were found in nine counties, mostly in southwest and central Missouri; the only reports north of the Missouri R. were from Boone and Ralls (m.ob.). The region’s only Veerys were one or two in Boone, Delaware, and Iowa in Iowa (m.ob.).

Nine Eurasian Tree Sparrows at Otter Creek M., Tama 1 Jul (BSc) and one in Ames, Story 16 Jul (DCH) were along the western edge of its Iowa range. Single Spotted Towhees were reported with some details at Big Sioux W.A., Lyon and Oak Grove P., Sioux in nw. Iowa 18 Jun (DA). With the issues related to interbreeding with Eastern Towhee in this area, more details, photos, and/or tape recordings are needed to further document this eastward range expansion. Up to 5 Clay-colored Sparrows were in seven counties across northern Iowa where they nest (m.ob.). Rare in Missouri’s Mississippi R. lowlands, 6 Grasshopper Sparrows were at Sand Prairie C.A., Scott 17 Jun (AG) and up to 3 were at five locations in Cape Girardeau (AG). In recent years, Iowa has had some amazingly high counts of Henslow’s Sparrows. More than 300 territories were found at Kellerton B.C.A., Ringgold in both 2015 and 2016 (BEh) which led to its recent designation as a Globally Important Area for the species. This year ca, 200 Henslow’s Sparrow territories were at Neal Smith N.W.R., Jasper (Karen Viste-Sparkman) and ca. 250 territories were at Lake Sugema B.C.A., Van Buren (BEh). The region’s only White-throated Sparrow was one photographed at Weldon Spring C.A., St. Charles, MO 9-10 Jun (Bill Michalski, ph., Mike Grant, MT). A Yellow-breasted Chat in Lyon in the northwestern corner of Iowa 18 Jun (DA) was far from its usual southeast Iowa range. Great-tailed Grackle continued its scattered distribution in Iowa with up to 8 in nine counties in the western half of the state (m.ob.).

Late warblers in Iowa were a Black-and-white Warbler at Big Sand Mound S. Pre., Muscatine 8 Jun (KJM) and a Canada Warbler in Marion, Linn 3 Jun (Jim Durbin). Ovenbirds were found in two northern Missouri counties where rare in summer; one at Deer Ridge C.A., Lewis 7 Jun (JRk) and at three sites in Adair including 4 on the Sticklerville B.B.S. 10 Jun (TE). The 48 Prothonotary Warblers at Rock Creek P., Scott 19 Jul (KJM, Mark Roberts) was a high count for Iowa. The only Swainson’s Warblers were a pair at Turner Mill Spring, Oregon, MO 9 Jul (BJ). Away from its traditional stronghold in the Ozarks, Missouri’s only Hooded Warbler was one at Simpson P., St. Louis 22 Jul (DBr). Iowa’s only Hooded Warbler was one in Iowa City, Johnson 20 Jun (Chris Edwards). Singing first-spring male American Redstarts were at Clarence Cannon N.W.R., Pike 3 Jun (BR) and Columbia Bottom 8 Jun (BR) in Missouri, sites where they are not known to nest. There were numerous reports of Cerulean Warblers from its stronghold in Yellow River S.F. and Effigy Mounds N.M., Allamakee in ne. Iowa (m.ob.). Two Chestnut-sided Warblers at Effigy Mounds N.M., Allamakee 7 Jun (Gregory Osland) were in an area where they might nest. Away from their stronghold in the Missouri Ozarks, the only Pine Warblers were one at Rocky Fork Lakes C.A., Boone, MO 5-8 Jun (Shelby Thomas), and one at Farmington Unit, Lee 7 Jun (DTh) and 2 at Stephens S.F., Lucas 1 Jul (TNJ) in Iowa. Casual in Iowa, a Prairie Warbler at Stephens S.F., Monroe, IA 1-12 Jun, 1 Jul (JLF, TNJ, DA) was a continuing bird from spring.

Blue Grosbeak continued its expansion from its previous range in the far west and southeast corner of Iowa. As in recent years, a few were found in Cerro Gordo, Floyd, and Worth in north-central Iowa (CJF, BVL, RG, Paul Hertzel), in Johnson, Linn, and Black Hawk in e-cen. Iowa (m.ob.), and in Polk (SJD, Eric Ollie, RJT). Painted Buntings were found in Christian, Dade, Greene, Ripley, Stone, and Taney in southwestern MO (m.ob.), with a high count of five at Conco Quarry, Greene 3 Jun (Lisa Berger). 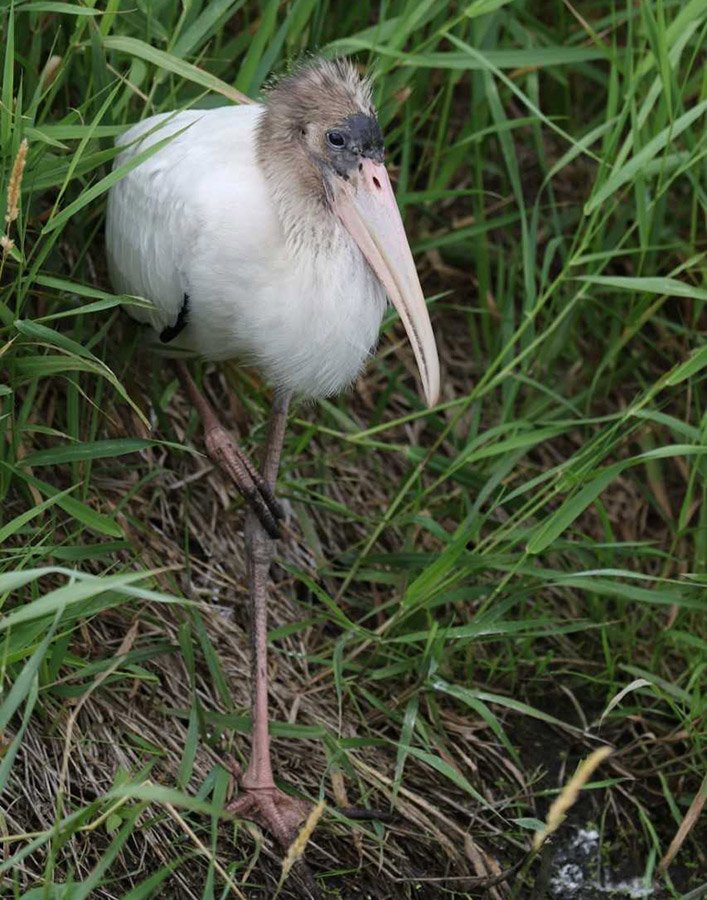