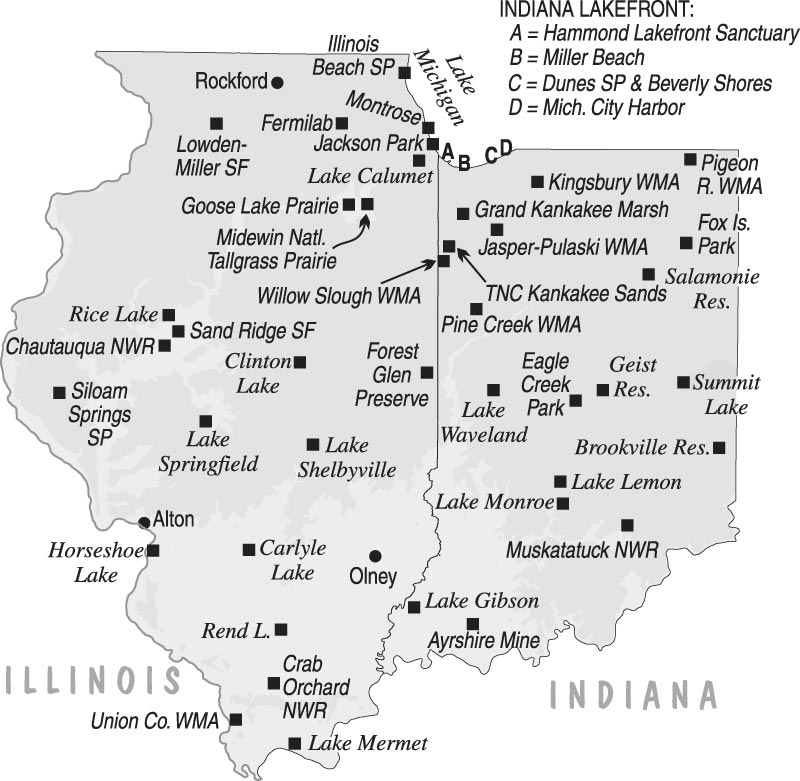 Once incorporated into the broader Middlewestern Prairie region of North American Birds, about which Ken Brock wrote so ably for many years, Illinois and Indiana form a region with a bi-state bird list totaling approximately 470 species. Despite insignificant geographic relief (only 300 m) and large swaths of agricultural landscape (aka the “corn and soybean desert”), the region’s diverse habitats include prairies (scattered mostly in the northern and western portions and supporting two struggling populations of Greater Prairie-Chickens), extensive hardwood forests (mostly in the southern tier), and abundant riparian corridors throughout. Wetland habitat, much reduced from when the region hosted one of the largest freshwater marshes in the United States, is increasing via restoration. Finally, 108 miles of Lake Michigan shoreline significantly impact the region’s avifauna.

Of 42 species of warbler recorded in the region, 25 are documented as having nested. The impressive regional shorebird list, boasting 51 species, includes rare inland records of Common Ringed Plover, Lesser Sand-Plover, Black-tailed Godwit, Spotted Redshank, and Red-necked and Little stints. Other nationally significant records include Common and Hooded cranes, Black-tailed Gull, Large-billed Tern, and one of the few and the most northerly North American records of Small-billed/White-crested Elaenia.

The Field Museum of Natural History in Chicago, which houses the world’s fourth largest bird collection, contributes profoundly to ornithological research. John Fitzpatrick, Scott Lanyon, and Dave Willard have been among the museum’s notable curators. Willard’s research highlighted the fatal impact on birdlife of night lights in Chicago’s buildings and led to the significant reduction of such lighting during spring and fall migration. Noted ornithologist Margaret Morse Nice, who lived in Chicago between 1936 and 1974, worked with local conservationists to protect two important bird areas: Wooded Island in Chicago’s Jackson Park and part of what is now Indiana Dunes National Park.

The ABA gratefully acknowledges the contributions of Illinois & Indiana Regional Report Compilers James D. Hengeveld, Keith A. McMullen, and Geoffrey A. Williamson to promoting knowledge and understanding about the birdlife of the continent.