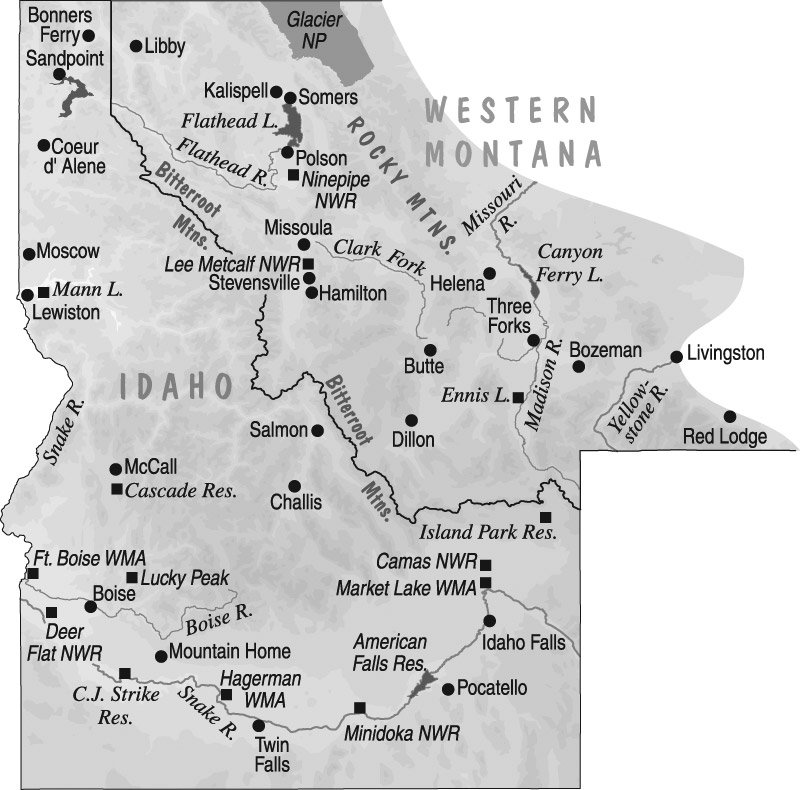 Despite predictions for a mild winter, unusually cold temperatures accompanied by above-average precipitation afflicted the region in December and January. February featured seasonally warm temperatures, but precipitation remained well above average. Perhaps owing mostly to the harshness of the season, relatively few vagrants were discovered. But if one supports the time-tested adage of “quality over quantity,” then the season will long be celebrated for the exciting discovery of an Old World flycatcher in northern Idaho that was unprecedented in the region and only the fourth record in the lower 48 states.

The only reported Greater White-fronted Goose was near Lewiston, ID 18 Dec (CS). A total of 170 Snow Geese reported from seven locations was far fewer than last winter’s record tally, but well above the norm for the season. The only reported Ross’s Goose was near Hagerman, ID 18 Dec (SH). Cackling Geese numbers were above average for winter, with 17 tallied from seven locations. Only one Eurasian Wigeon was reported, representing a low winter count. Although unusual for the season, a Cinnamon Teal near Hagerman, ID 20 Feb (ph, DH, CHu) undoubtedly represented an early spring arrival. Single Surf Scoters that showed up in Idaho’s Bonneville 3 Dec (SB) and Bingham 15 Dec (SM) added to only a few winter precedents. A Long-tailed Duck spotted in Shoshone, ID 25 Jan (BK) provided the season’s only report of the species. Very surprising, if not unprecedented, were single Eared Grebes in Bozeman, MT 17 Dec (JP), near Bigfork, MT 17 Dec (CH), and at American Falls, ID 22 Dec (PW). Also unexpected was an American White Pelican in Nez Perce, ID 5–7 Jan (JH).

The CBC tally of Eurasian Collared-Doves declined in Idaho for the first time since 2002, when the species was first recorded (CS). A Barn Owl in Lake 17 Dec (ph, JO) was interesting; the species is not seen annually in western Montana. The only reported Snowy Owl of the season was photographed in Jerome, ID 14 Jan (ph, JS). A Burrowing Owl discovered near Marsing 25–31 Jan (PM) may represent Idaho’s first Jan record. Two Great Gray Owls near Boise 10–27 Feb (ph, JT) was an interesting rare find. Although Anna’s Hummingbirds have been recorded in Idaho since the mid-1970s, a total of 37 that were documented  through mid-Dec (HW) was surprising. The only reported Montana Anna’s was in Somers 6–7 Dec (SR). Any sapsucker in Idaho after autumn would be unusual, so reports of two Red-napeds in Boise 8 Dec–26 Feb (JC, JT) plus single Red-napeds in Caldwell 17 Dec (HW) and Twin Falls 17 Dec (ZW) were very surprising, as was a reported Williamson’s Sapsucker in Latah 26 Dec (ph KD). For the third consecutive winter, a Red-breasted Sapsucker overwintered in Boise, ID 8 Dec–26 Feb (ph, JC, JT). Lewis’s Woodpeckers, not annual, were interesting finds near Eureka, MT 17 Dec (LY) and Stevensville, MT 31 Dec (DL). Gyrfalcon numbers were well above the norm for the season, with reports of six in Montana and one in Idaho. A total of only six Blue Jays were reported in Idaho, indicating an average non-irruption year.

The only Northern Mockingbird of the season was in Kimberly, ID 11–17 Dec (MA). An astounding 43 Lincoln’s Sparrows were recorded on southern Idaho CBCs 17 Dec–2 Jan; the species is unexpected in winter. Rare Swamp Sparrows made an excellent showing in Idaho, with three near Nampa 17 Dec (CHu), one in Caldwell 17–26 Dec (HW), one near Pocatello 30 Dec (fide CT), and up to two in Hagerman 18 Dec–4 Feb (AY). Golden-crowned Sparrows are especially rare in winter, so two spotted near Nampa, ID 17 Dec (CHu) were noteworthy. Montana tallied rare Rusty Blackbirds near Hamilton 17 Dec (JO), in Lake 18 Dec (ph, JCo), and near Missoula 15 Jan (ph, SC). Brown-headed Cowbirds are far from annual in northern Idaho, making one in Latah 16 Jan–17 Feb (TG) a great find. Always rare, a Purple Finch in Bonner, ID (ph, †RDC) represented the season’s only report.

SA Not only the bird of the season, but perhaps also the rarest bird ever recorded in the region was a Red-flanked Bluetail that wandered to Lewiston, ID. Local birder John Hanna was conducting a raptor survey in Lewiston’s Hells Gate State Park on 26 Dec when he detected an interesting small passerine that he didn’t recognize. After determined the bird’s identity that evening and spreading the news of this Eurasian vagrant, birders began to arrive in the park the next morning. Weather conditions in the Inland Northwest at the time of the bird’s discovery made for terrible travel; nevertheless many passionate birders from near and far braved dangerous road conditions to see the bluetail before it departed after 13 Jan. This Red-flanked Bluetail represented a first state and regional record, and was also the fourth record in the lower 48 states. Additionally, the Idaho location represents the furthest inland occurrence of the species in North America. 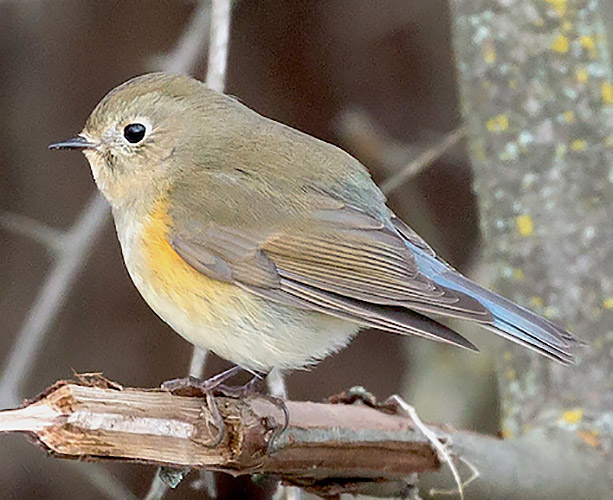 A Red-flanked Bluetail, discovered in Lewiston, ID 26 Dec 2016 and photographed 29 Dec, was present there through 13 Jan 2017. The bird represented a first record for Idaho and the region. Photo © Darren Clark.