Idaho Eurasian Wigeons were notable finds in Kootenai 11 Mar (WY), Latah 13 Mar (TG), and near Troy 31 Mar (CL). If accepted, a Tufted Duck in Elmore 11-12 Mar (ph, CH, DH) will represent Idaho’s fifth record. A count of 37 Greater Scaup at Ennis Lake, MT 14 Apr (TF, AG) was extraordinary for the Region. Two other Greaters near Moscow, ID 5 May (CL, CS) were also notable. Long-tailed Ducks are seldom reported in spring in Idaho, so one below the A.F.R. Dam 21-30 Mar (ph, AY) and one at Lake Walcott 27 Mar (ph, TD) were interesting. White-winged Dove may have made its best showing ever in Idaho, with one in Boise, ID 23 Apr-27 May (ph, JB, JCu), one in Bonneville 16 Jun (ph, KP), and one in Jefferson 22-27 Jun (SB, DC). The documentation of a Sandhill Crane with a colt 8 Jul (ph, MS) in Kootenai, ID provided a first confirmed local record of breeding. Local early Montana records were toppled by reports of two American Avocets at Three Forks 31 Mar (RW) and a Long-billed Curlew near Twin Bridges 31 Mar (BB). The only reported Black-bellied Plover of the season was in Jefferson, ID 16 May (JB). Not annual in Idaho, a Snowy Plover was a fantastic discovery in Owyhee 26-27 May (ph, MI, RLR). A Whimbrel was an excellent, rare find in Twin Falls, ID 15 May (ph, AY). Dunlin are unexpected in spring, so one in Owyhee, ID 26 May (RLR) was noteworthy.

Rare Mew Gulls made an unusually good showing in Idaho, with singles discovered in Power 25 Mar (AY), Ada 1-3 May (JT), Kuna 7 May (JR), and Owhyee 26 May (RLR). A Lesser Black-backed Gull, rare, but now annual in Idaho, was found in Canyon 14 Mar (ph, RLR, CH). A count of 191 Common Loons at Ennis Lake, MT 22 Apr (JP) established a local spring record. The Snowy Egret near Belgrade 23 Jun (PE) was only about the eleventh record for sw. Montana. Idaho Green Herons, not annual, were discovered in Bingham 4-8 Jul (ES, CSk) and Power 28-31 Jul (KE). Single Idaho Glossy Ibis stopped near Stone 20-22 May (ph, SD) and in Ada 9 Jul (ph, HWC, JC); the species is now rare, but nearly annual in the Gem State. A Red-shouldered Hawk was a good find near Twin Falls, ID 31 Jul (ph, AY). Broad-winged Hawks are very rarely documented away from hawk watch sites, so one in Twin Falls, ID 29 Apr (ph, BH) was exciting. Near-record early was a Burrowing Owl in Park, MT 25 Mar (PM). The only reported Barred Owl of the season was one in Boise, ID 27-28 May (ph, MK). A wayward Lewis’s Woodpecker in Boundary, ID 18 May (RC) was unexpected and noteworthy, as were three in Gallatin, MT 27 Jun (TF, JP).

The bird of the summer season was a Louisiana Waterthrush in Blaine 16-22 Jul (ph, TR, m.ob.) that provided a first record for Idaho and the Region. Idaho reports of other extralimital warblers included a Black-and-white Warbler in Jefferson 3 Jun (MH), a Northern Parula in Ada 9-10 Jun (JC), a Chestnut-sided Warbler in Jefferson 24 May (ph, DC), and a Blackpoll Warbler in Jefferson 20 May (HT). A Blackburnian Warbler seen near Bozeman 6 Jun (JP) was only the fourth record for southwest Montana. If confirmed, a Black-throated Green Warbler in Elmore 10 Jun (ph, RM) will be Idaho’s second. A Summer Tanager in Jefferson 2 Jun (CT) will add to about ten accepted records. Rose-breasted Grosbeaks, rare-but-regular visitors to Idaho, came through Blackfoot 23 Apr (BC) and Bonner 10 Jun-31 Jul (ph, FF). A pair of rare Blue Grosbeaks in Jefferson, ID 21 Jun-31 Jul (ph, DC) was interesting, and may have indicated local breeding. An Indigo Bunting was a great find in Madison, ID 26-27 May (ph, BS), as was one in Canyon, ID 12 Jun-16 Jul (ph, AW).

Photos–Idaho & Western Montana: Spring and Summer of 2018
Hover or click on each image to read the caption. 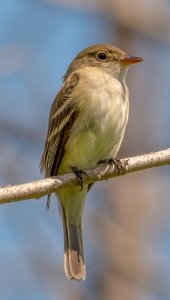 On June 12, 2018 while slowly driving a remote Boundary County, Idaho road with his windows down, Alec Hopping detected a Trail’s-type Empidonax flycatcher that commandeered his attention. Following this bird on foot, Hopping soon saw features and heard vocalizations of this bird that convinced him beyond a shadow of a doubt that it was an Alder Flycatcher. Fortunately, Hopping obtained photos, video, and sound recordings of this male bird’s songs and call. After a number of local birders made the exodus to this site in the following days, at least one other singing Alder Flycatcher was reported there. Over the years, there have been a few previous reports of Alder Flycatchers in Idaho, but no previous record has been accepted by the IBRC, because they lacked recorded evidence of vocalizations. Photo by © Fred Forssell (June 15, 2018). 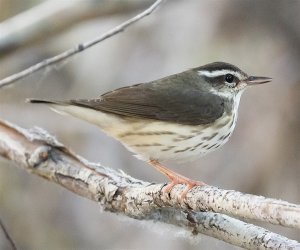 While making a Yellow-billed Cuckoo survey along the Big Wood River north of Ketchum, Idaho on July 16, 2018, research biologist Tempe Regan chanced upon an incredible find: a vagrant Louisiana Waterthrush that responded to her survey device’s cuckoo vocalizations! Fortunately, the Louisiana Waterthrush remained at this location for six days, allowing many birders the chance to view a truly rare bird that is expected to garner Idaho’s first record. Photo by © Darren Clark (July 16, 2018).