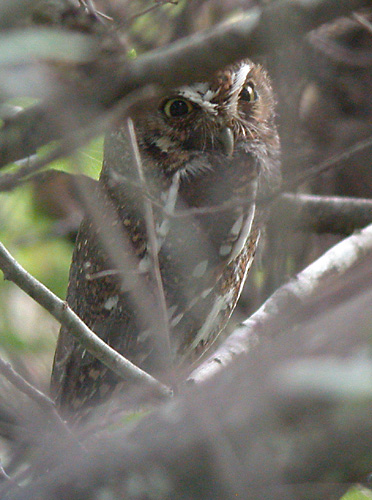 A hooked bill, large eyes, and a round facial disk make it easy to see that this bird is an owl-but what kind? Owls can be difficult to identify, in large part because we don’t see them with the same frequency that we see many other birds. When we do see them, it is often when we go out at night specifically looking for them. Then, with whistled imitations, tapes, or CDs, we usually have a good idea of what we are going to see before we see it. When you are whistling for an Eastern Screech-Owl, and an owl flies in, there is a very good chance that it will be an Eastern Screech-Owl.

Seeing an owl roosting in the day-as in this photograph-is very exciting, but it may be frustrating if we aren’t sure what it is. Unlike warblers that may flit away, most owls stay put when you find them during the day. While we have a great opportunity to study them, we usually can’t say that the bird flew away.

[reveal heading=”%image% What species do you think this owl is? Once you’ve decided, click here to find out if you are correct>>”][/reveal]

In this case we can quickly eliminate all of the larger owls. While size is difficult to judge from a single photo, the blur of branches lends to the impression that this bird is a rather small owl. The overall coloration and patterning are also wrong for any of the larger owls. Within the ABA Area, we are therefore limited to the genera Aegolius (Boreal and Northern Saw-whet), Otus (Flammulated Owl and the three screech-owls), Micrathene (Elf Owl), or Glaucidium (the two pygmy-owls).

Boreal and Northern Saw-whet Owls can be eliminated because of their facial patterns. Boreal has a mostly white face with a broken dark border to the face (auriculars). Northern Saw-whet has a pale-buff facial disk.

Pygmy-owls are quite diverse and could be confused with this bird. All pygmy-owls are relatively long-tailed, and while this bird seems short-tailed, it is nearly impossible to know for sure from this image. The crown of this bird gives us some excellent clues. We can see at least four fairly prominent cinnamon-buff spots on the forecrown. Ferruginous Pygmy-Owl would have fine white streaks on the crown, quite unlike this bird. Northern Pygmy-Owl has spots on the crown, but these are usually white or pale. Furthermore, the indistinct tawny-buff spots on the mostly grayish upperparts are wrong for pygmy-owls, which have more uniformly colored upperparts.

The overall rufous-and-gray coloration may immediately bring to mind Flammulated Owl, but this species is easily eliminated by this bird’s yellow eyes; Flammulated Owls always have dark eyes.

Other Otus owls (i.e., the screech-owls) bear a strong similarity to our bird. Indeed, if this quiz were a democratic affair, Eastern Screech-Owl would be the winning guess. Bill color is important for identifying screech-owls. In this case the bill appears greenish-yellow in color, which is fine for Eastern Screech-Owl and probably one reason why so many people guessed Eastern Screech-Owl. But before we go too far down this road, we need to make sure the bird really is a screech-owl. Aside from fuzzy downy youngsters, screech-owls have prominent dark borders to the facial disks (i.e., auriculars); these borders are especially broad and dark near the bottom corners. The indistinct tawny-buff spots on the grayish upperparts are also inconsistent with any of the screech-owls. The upperparts of screech-owls have dark shaft-streaks, and no screech-owl species shows these buffy spots.

The one small North American owl that shows prominent cinnamon spotting on the crown and less distinct, paler, tawny-buff spots on the upperparts is the Elf Owl.

This Elf Owl was photographed at Bentsen-Rio Grande Valley State Park in April 2002 by Chris Wood. The photo and answer were supplied by Chris Wood.