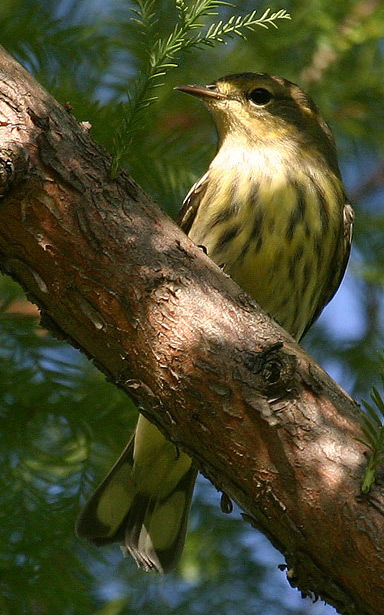 This bird has a relatively thin and small bill, a wash of yellow on heavily streaked underparts, and a short tail with prominent tail “spots”. The combination of these features should call to mind one group of birds: the (New World) warblers. Pipits are vaguely similar, and some Eurasian pipits are regularly seen in trees (hence the old name of “Tree-Pipit” for a few species). But all pipits have much longer tails than this bird and a much different overall shape. Furthermore, no pipits match this bird in terms of face and tail pattern.

Fall warblers are often challenging. This isn’t so much because there are so many species that look alike, but that many individuals move around so fast that you may not be able to see what you want, and before you know it, the bird’s gone. But in this case, we’ve lucked out!

The first thing I like to do when I see a warbler is to try and place it into the right group of warblers. The Vermivora warblers (Orange-crowned, Tennessee, Virginia’s, Nashville, Lucy’s, Colima, Blue-winged and Golden-winged) are generally unstreaked below, tend to have very small and slim bills, and the wingbars are faint or not present at all. Of course, there are exceptions: Blue-winged Warblers have rather bold white wingbars and Golden-winged Warblers have bold yellow patches on the wings. More germane to our discussion is the Orange-crowned Warbler, which regularly shows blurry streaks to the flanks and sides of the breast. Yet these streaks are never as bold as on our bird and would not continue across the breast.

The other large genus of warblers in North America is Dendroica, which is generally made up of warblers with streaked underparts and tails spots. In fact only three other genera contains species of warblers found in the ABA area that show this much streaking on the underparts: Mniotilta (Black-and-white Warbler, which has bold black-and-white streaking that is particularly heavy on the flanks and undertail coverts); Wilsonia (Canada Warbler, which has a grayish to black “necklace” on bright yellow underparts, and bright white undertail coverts) and the odd assemblage in the genus Seiurus that currently includes Louisiana and Northern Waterthrush and Ovenbird. While each of these species has streaking on the breast, it is even more pronounced than on this bird. Each species also has a strong black border on each side of the throat.

From this point there are many things that we can focus on to narrow down the possibilities. Let’s focus on the tail. For one, tails are particularly useful for identifying warblers. And two, think of all the times that you’re looking up in a tree and just about the only things you can see well is the tail.

This tail is relatively short, maybe not quite as short as a Cerulean Warbler or a Yellow Warbler, but is seems to approach that. Even more importantly, let’s focus on the tail pattern. The white area on each tail feather (“the spot”) is completely bordered by dark on the sides of the feather and at the tip of the feather.

There is only once Dendroica warbler that typically shows that pattern: Cape May Warbler. Some Audubon’s [Yellow-rumped] Warblers approach this pattern, but the dark sides come down more diagonally, not straight across as on our bird.

Of course, it’s always a good idea to support your identification with more than one field mark. Looking carefully, we see that the bill on this bird is ever-so-slightly decurved and the auriculars (a.k.a. “ear-coverts”) are bordered by yellow. There is also a hint of a bright white mark on the top of the bird’s wings (which is indeed, the broad white median coverts, typical of many plumages of Cape May Warbler).

This Cape May Warbler was photographed on 23 September 2004 at Busey Woods, Urbana, Champaign County, Illinois.

For more on warbler tails, I highly recommend Jon Dunn and Kimball Garrett’s A Field Guide to Warblers of North America. In particular, see Tom Schultz’s exceptionally helpful plates 31 and 32, which show the undertail patterns of North American warblers. This book is available from ABA Sales.