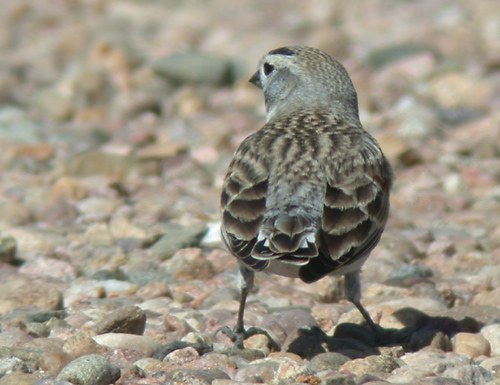 Although it doesn’t offer your typical field guide pose, this photo certainly does provide a view that we often see while birding-a bird’s rear end. Nonetheless, this angle shows us a lot about the bird. Even if we account for any foreshortening caused by high magnification and angle of orientation, we know that we are dealing with a chunky bird whose wings and tail are relatively short. Most importantly, the bill is thick, rather short, and conical. Bill structure alone lets us know that we are dealing with some type of seed-eating bird.

The next thing that may jump out at one is the pattern of white and black in the tail. This tail pattern eliminates all the grosbeaks, Passerina buntings (Lazuli, Indigo, Painted, and Varied Buntings and Blue Grosbeak) cowbirds, blackbirds, finches, and Old World sparrows that we are likely to encounter in the ABA area. While meadowlarks have white in the tail, no species has wide black tips to any of the retrices, and the bill is totally wrong for a meadowlark. Pipits have longer, thinner bills than does our bird, as do both Sky and Horned Larks. Larks also lack solid dark tips to any of the rectrices.

This leaves us with the four North American longspurs. Let’s return and look at the tail in more detail. The inner pair of rectrices (R1) appears entirely brown, but the other rectrices that we can see have white bases and black tips. That pattern is wrong for Smith’s and Lapland Longspurs, which have one or two white outer rectrices. Furthermore, the primary projection appears too short for either of the arctic breeding longspurs. The lack of rufous in the tertials and in the greater coverts is also unlike what is shown on Lapland and Smith’s.

The two remaining longspurs with relatively short primary projections are McCown’s and Chestnut-collared. The extensively grayish nape and rear auriculars, along with the grayish rump, are unlike Chestnut-collared at any season. The bill also appears a bit too thick for Chesnut-collared, but perfect for McCown’s. The face pattern, with pale lores that connect with a broad pale supercilium, is also classic McCown’s Longspur. All of these indications leave us with no doubt that this bird is a McCown’s Longspur.