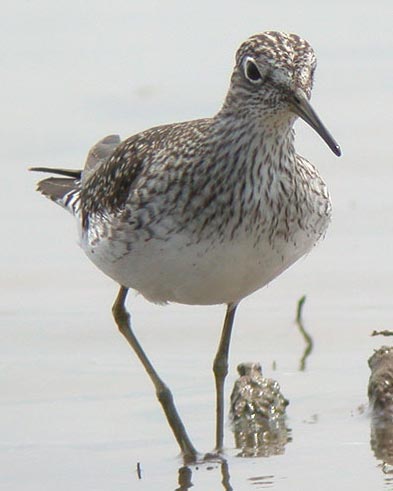 The first step is to place a bird into the correct “group” of shorebirds, which we do largely by focusing on structure. In this case, the relatively long legs and medium-length bill should call to mind the Tringa shorebirds—Greater and Lesser Yellowlegs, Solitary Sandpiper and a host of Asian rarities. Either Wandering or Gray-tailed Tattler could be considered initially, but our bird is simply too patterned, unlike either tattler which would show more uniformly colored upperparts. Breeding plumaged birds would be heavily barred on the underparts, while other plumages are more uniformly gray below.

[reveal heading=”%image% What species do you think this shorebird is? Once you’ve decided, click here to find out if you are correct>>”][/reveal]

Neither yellowlegs fits well either. The contrasting paler grayish base to the bill is more expected on a Greater Yellowlegs, but the bill seems much too short for that species. Furthermore, neither yellowlegs would show as conspicuous of an eyering. The tail pattern is also wrong for either yellowlegs.

Solitary Sandpiper fits much better, with the small spots on the upperparts, bold white eyering, and greenish legs. Still, there are a few strays that we should probably consider—just in case. Wood Sandpiper is rather similar structurally, but that species shows more markings on the upperparts and a prominent pale supercilium. Green Sandpiper, on the other hand, is very similar to our bird. Both have prominent white eyerings and the general coloration of the upperparts is very similar. But let’s take a closer look at the tail. We can see that at least one of the tail feathers is all dark (the one on top, or innermost) and contrasts markedly with those below it that have heavy broad blackish barring. This contrast between dark uniformly-colored inner retrices and heavily barred outer retrices is one of the easiest ways to distinguish this Solitary Sandpiper from a Green Sandpiper, which would have a white rump, uppertail coverts and finely barred retrices.

This Solitary Sandpiper was photographed in Uvalde County, Texas in April of 2002.