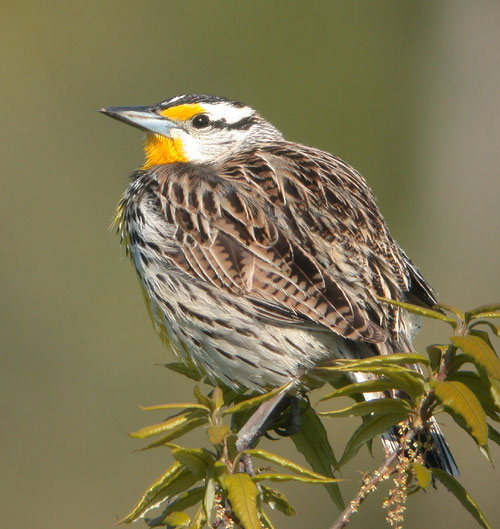 There are not that many birds with a bright yellow throat, bright yellow lores, and heavily patterned brown and black upperparts. While Yellow-throated and Grace’s Warblers may come close in throat pattern, the intricately patterned upperparts, and more importantly, the long pointed bill really only leave us with Eastern and Western Meadowlarks.

When I was growing up (not really ALL that long ago), the conventional wisdom was that meadowlarks couldn’t be separated except by voice. While vocalizations still are among the most reliable ways to separate meadowlarks, we’ve come a long way

One of the standard visual field marks used for separating Western and Eastern Meadowlarks is the extent to which the yellow on the throat extends onto the malar. But even here, we need to be careful with definitions. I prefer David Sibley’s definition of malar, which is based on feather tracts. In this case, if we look at the base of the bill, we see a dark line extending downward that separates two feather tracts: the throat (left of the line) and the malar (right of the line to about where the streaked area on the auricular appears). Other definitions are based on patterns that may or may not exist on an individual bird, which make it a challenge to describe a facial pattern when some of the features are not present. So, using Sibley’s definition of malar, we see that there is a bit of yellow that extends into the otherwise white malar. Usually when we think of yellow malar, we think Western Meadowlark. In this case, however, the yellow is very limited. Given the brightness of the throat and lores, it is much more limited than we would expect from on a bright Western Meadowlark. The head pattern overall is also very bold, with and inky black eyeline and lateral crown stripes that contrast boldly with what we can see of the median crown stripe and the rest of the face—very suggestive of Eastern Meadowlark.

I photographed this Eastern Meadowlark in June 2005 in Champaign County, Illinois.