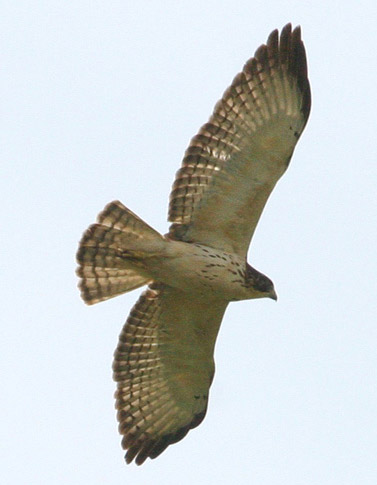 Identifying many birds in flight can be challenging. Birds often fly away from us. They’re often far away. And, they can be at difficult angles. But soaring raptors are when raptors are at their easiest. They’ll circle lazily overhead and you can typically see all of their underparts and get a great perspective at shape.

The first step is to place our bird in the right group of raptors. Falcons and most kites have wings that appear longer, more pointed and not as broad. Hook-billed and Snail Kites have much broader wings. Any accipiter would have a much longer tail and the underparts of the body would be either barred (adults and 2nd cycle birds) or heavily streaked (juveniles). Eagles don’t match our bird on plumage or shape.

[reveal heading=”%image% What species do you think this hawk is? Once you’ve decided, click here to find out if you are correct>>”][/reveal]

We are left with the Buteos and closely related genera. Still there are some birds that we can quickly eliminate. Harris’s Hawk is distinctive in all ages. Zone-tailed Hawk is completely different. Even juvenile Common Black-Hawks have broader wings and more extensive markings on the underparts (adults have all dark bodies). Juvenile Gray Hawks are rather similar to our bird, but the trailing edge of the wings would be pale, the cheeks would be much paler and contrast markedly with the dark malar, and the dark tail bands would be more pronounced.

At this point, we should look more carefully at the shape. For a Buteo the wings are rather pointed. Some of this may be caused by the outer primaries being held closed, but even accounting for that the wings seem more pointed than we would expect on Red-tailed, Rough-legged and Ferruginous Hawks. The darker primaries and secondaries that contrast markedly with the pale underwing coverts also eliminate Red-tailed, Rough-legged and Ferruginous Hawk

The pointed wings may suggest Swainson’s Hawk, but that species has longer and narrower wings. Adults Swainson’s would also have a complete bib, and even the palest juveniles would show more dark markings on the sides of the upper breast.

Red-shouldered Hawk isn’t right for our bird either-the underparts are not as heavily marked, and, with this type of backlit view, we would see obvious crescent-shaped pale wing panels on a Red-shouldered Hawk.