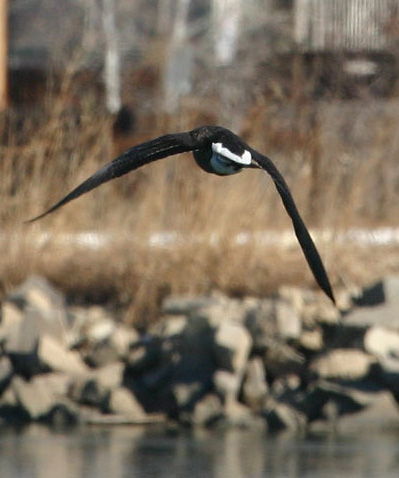 The combination of size and shape is so important in bird identification, that when we see a bird at an odd angle at an unknown distance, it can often be very challenging to identify. We received votes for a total of 27 species, many of which we may think would never be confused with each other.

Even with the odd angle, I still approach identification by starting with structure. Here we have a fairly heavy-bodied bird with relatively broad wings. From here, what stands out are the bright white uppertail coverts and undertail coverts that contrast with the very dark upperparts, and apparently nearly black underparts. Looking very closely in seems that the tail is also black, but either very short, mostly hidden or a bit of both.

This pattern may call to mind some of the storm-petrels (Wilson’s Storm-Petrel, Band-rumped Storm-Petrel or even Leach’s Storm Petrel). Leach’s can be conclusively eliminated by our bird’s white undertail coverts. (This bird also seems too broad-winged for a Leach’s, a species which is very long-winged). Similarly, even the most well-marked Band-rumped Storm-Petrel should not show this much white on the undertail coverts. Among this trio of storm-petrels, Wilson’s Storm-Petrel has the most extensive white on the undertail coverts, but the white on the underparts of our bird still seems too extensive even for this species. Looking more critically at the wings, the palest part of the upperwing is on the primary coverts. That’s a no-no for any storm-petrel where the greater coverts over the secondaries are the palest part of the uppersurface of the wing.

Alcids don’t fit well either, as, at most, the white only wraps up around the sides of the rump and not completely across the uppertail coverts (excluding some of the whitest Black Guillemots, which are so white as to never be confused with this bird). While some raptors are somewhat similar in plumage, the shape and exact wing pattern and pattern of the upperparts are not right.

One familiar group of birds that does fit well in terms of shape and plumage are the geese. Canada Goose and Cackling Goose both look very similar to our bird. But I contend that our bird seems a bit dark. Perhaps in some lights the darkest Cackling Goose or “Dusky” Canada Goose, could come close to this bird, but I still think the bird looks too dark (particularly the wings). The long white uppertail coverts are too extensive for any Canada Goose or Cackling Goose. Here the tail only barely extends past the tip of the tail. And let’s return to the palest part of the upperwing–the primary coverts, which contrast pale gray. That is unquestionably wrong for both Cackling and Canada Geese and the third and final strike-out against those species.

Only two species of dark geese with all dark tails typically show this pale patch to the primaries: Brant and Barnacle Goose. On Barnacle Goose, the greater coverts that cover the secondaries are also pale gray. The scapulars would be more heavily patterned, and the tail and uppertail coverts are like that of a Canada Goose.

This leaves us with Brant, which matches our bird in terms of uppertail coverts and tail pattern, as well as wing pattern. The extensive black underparts of our bird should be enough to tell us this is a Black Brant, while the very pale tips to the wing coverts and secondaries, and the lack of white markings on the flanks indicate a first-cycle bird. Admittedly, the most conscientious observer would want a better view of the underparts to make sure that the dark coloration wasn’t caused by lighting conditions and more thoroughly eliminate “Intermediate” Brant or intergrades between Black Brant, and Pale-bellied Brant. This first-cycle (Black) Brant was photographed in early January 2004 in Broomfield, Colorado.