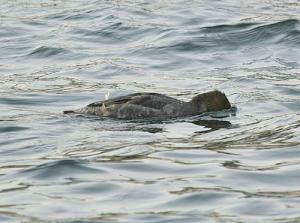 Waterbirds. They are among the first birds that we learn. Most are found in the open. Most are easy to identify. And most receive little attention after the first few years of birding. Oh sure, we often go look for scoters, eiders or other ducks that occur seasonally, or are rarities; but few of us look at ducks in the way that we look at shorebirds, warblers, or even gulls.

[reveal heading=”%image% What species do you think this owl is? Once you’ve decided, click here to find out if you are correct>>”][/reveal]

Structure so often provides the best clue for identifying birds. And while we can’t see the head of this bird (we usually can’t in these photo quizzes!), we can still get a sense that we are dealing with a fairly long bird, one that doesn’t have a very long neck, but doesn’t have the stubby neck we would find on an alcid.

Looking carefully, we should notice that the back of this bird’s head looks a bit shaggy—sort of like how my friend Ted Floyd (Editor of ABA’s Birding magazine) looks when he gets up early in the morning (as Ted would attest, I look far worse). Now this could just be misplaced feathering, but there is one group of birds that often displays a shaggy crest like this—the mergansers.

This bird’s overall gray body isn’t what we would expect on Hooded Merganser, which is either unmistakable (males) or more uniformly brown. Female and eclipse Common and Red-breasted Mergansers do have grayish bodies. We can also see that here the rufous or maybe rusty-brown head contrasts slightly with the gray body. On Common Merganser, we would expect much more contrast and a well-defined line between the rufous head and the grayish neck and body. In fact, this slight contrast in color, without an abrupt demarcation between the head and body, is exactly what we would expect on a Red-breasted Merganser.

This Red-breasted Merganser was photographed in December in Gloucester, Massachusetts. The photo and answer were supplied by Chris Wood.

I knowingly saw my first American Redstart 40 years ago this summer. The bird was not a full-on adult male, splendiferously black-and-blaze-orange. It was more muted, light gray with lemon-yellow highlights...

This Month in Birding: September 2022

It's time for This Month in Birding with Jody Allair, Jennie Duberstein, and Sean Milnes. The panel joins host Nate Swick to talk about the biggest bird news of the month read more >>

Birds inspire art in many ways: writing, painting, photography, film. Not least of the art forms that birds frequently move people to create is music. The work of composer and violinist Julia Tchira has been heavily influenced by the wonder of birds, including a recent piece she wrote about the ABA’s 2022 Bird of the Year, the Burrowing Owl.