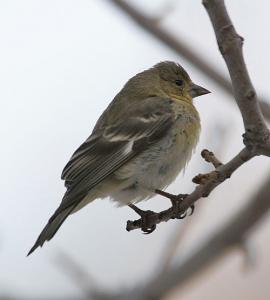 When dealing with a relatively uneventful bird such as this, it’s best to return to the basics and focus on size and shape/structure. In this case, it’s hard to make out the size for certain, but we can make a reasonable assumption from the twig that this is a fairly small bird. The best clue to place this bird in the correct family is the bill, which is relatively thick (that is to say thicker than a vireo or warbler, but thinner than a grosbeak).

[reveal heading=”%image% What species do you think this is? Once you’ve decided, click here to find out if you are correct>>”][/reveal]

Orioles may come to mind, but even the relatively thick-billed Altamira Oriole would have a proportionately longer and thinner bill than this. Sparrows merit consideration, but the bill seems somewhat more pointed than most sparrows, and the combination of pale wing bars and a white base to the primaries doesn’t fit any of those species.

Another clue to the identification of this bird is the length of the wings and tail. Here the wings appear relatively long, and the notched tail appears relatively short. This, in combination with the suffusion of yellow on the throat and breast, should call to mind the finches, in particular the Carduelis finches, or goldfinches – Lawrence’s, American, and Lesser Goldfinch and the Pine Siskin (and some vagrants and exotics, but we should only consider those if none of the regularly occurring ABA species match).

The wing pattern and overall coloration allow us to easily eliminate Pine Siskin and Lawrence’s Goldfinch. Looking carefully at the wing bars, we see that they are fairly narrow and drab. American Goldfinch should have broader wing bars. Also note the lack of any white coloration that would be present on an American Goldfinch. The drab brownish-olive upperparts without rich buff coloration are also typical of drab female and immature Lesser Goldfinches.

This Lesser Goldfinch was photographed by the author in La Veta, Huerfano Co., Colorado in late December 2004.