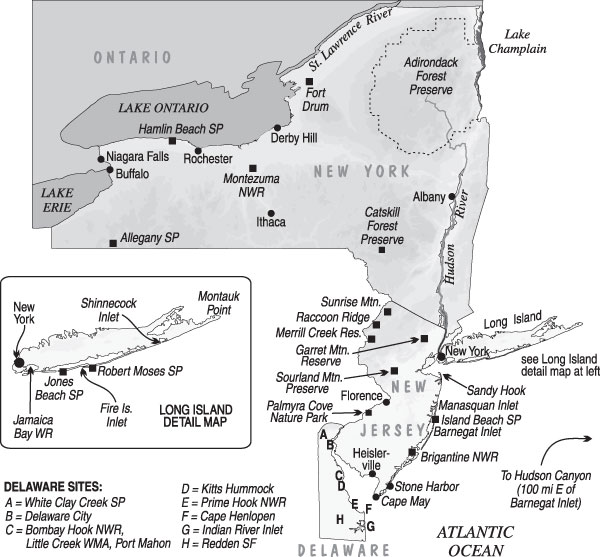 Comprising just three states, two of which are small, the Hudson-Delaware region is nevertheless home to extraordinary diversity in terms of both natural and ornithological history. The very notion of birding as a synthesis of outdoor recreation and field ornithology emerged when the skills and energies of countless figures, many of global prominence, were tried out in the twin crucibles of New York’s Linnaean Society and Cornell University. The ornithological histories of Delaware and New Jersey are similarly deep and rich, extending back to Alexander Wilson himself, followed by a pantheon of talent at the Delaware Valley Ornithological Club.

This region spans tremendous geological contrasts, from the Adirondack, Catskill, and Allegany mountains; to lowlands like the St. Lawrence River and Great Lakes Plains, Mohawk and Hudson river valleys, and the truly Carolinian coastal plains of Delaware and southern New Jersey; and two lengthy and utterly different coastlines, the shores of Lakes Erie and Ontario contrasting with and complementing one of the most intensively studied and richly rewarding ocean coastlines in North America, from Cape May to Montauk Point.

The forests of the Adirondacks and southern New Jersey could hardly be more different, and in between, northern and southern elements combine in astonishingly varied ways in a mosaic of forests, shrublands, and grasslands. Coastally, the southeastern North American salt bay and barrier beach motif reigns from Cape May to Shinnecock Inlet, beyond which the steep glacial bluffs near Montauk and along parts of Long Island’s North Shore are rocky enough to attract seabirds characteristic of New England. Many books have been written for and lives consumed by the fall migration potential of the Cape May peninsula. Less well known are the vast migrations along the region’s two widely spaced east-west shorelines: the Lake Ontario shore, with its immense flights of hawks (and other species) in spring and waterbirds in fall; and the South Shore of Long Island, where migrants of all kinds are concentrated in fall, and where northbound seabirds are easily seen from shore in late spring and summer.