A Eurasian Collared-Dove was unexpected at Henrietta, near Rochester, NY 8 July (Stephen Taylor), and another visited Cape May Pt. 23 Jun (Michael Pasquarello). This species has not expanded as aggressively here as in the western United States.

Common Nighthawks were dishearteningly scarce. Urban nesting, once widespread, continues only rarely, e.g. Buffalo, NY (two reports only) and the port of Bayonne, NJ (MB). At Fort Drum, 2–5 per day were observed, but one at Perch River 24 Jun was the only other St. Lawrence River Valley report (JBo). Further south in NY, one was at Wappinger’s Falls, Dutchess, 8 July (Debbie Van Zyl). In New Jersey, they probably breed in the Meadowlands, in Wharton State Forest (Burlington/Atlantic), and at Lakehurst. Cape Henlopen seems to be their only certain breeding locality in Delaware. A Chuck-will’s-widow called for the third summer at its odd northern outpost at West Mountain, Warren, NY, 22 Jun (Cathy Graichen, Gregg Recer) to 7 July (MM).

Upland Sandpipers maintained isolated southern outposts at Lakehurst (8 on 21 Jun, ADF, Sarah Freeze et al.), and at Shawangunk (one pair, 3+ Jun, AS, m. obs.) In upstate New York, Upland Sandpipers struggled. Tillman WMA, Clarence, Erie was their only remaining nesting site around Buffalo, and the Deerfield Grasslands south of Poland, Oneida/Herkimer, NY was the only site in the Oneida Lake Basin (MP, DW). In the St. Lawrence River Valley, only one was seen away from Fort Drum, which had 5-6 pairs (JBo).

Delaware had “the summer of the Ruff.” Bombay Hook hosted some six different individuals (fide FR), while other males visited Ted Harvey 10 July (LB et al.) and Big Stone Beach 12–16 July (CB et al.), both Kent. New Jersey, however, had none, and New York had only one Reeve, at Heckscher SP, Suffolk, 22 July (Lisa Nasta).

Common Terns on the St. Lawrence River islands (1048 nests) were about as numerous as last year, but fewer than in 2014–2016 (JBo). Since first-year Common Terns rarely return to their birthplaces, a total of about 20 at Nickerson Beach 10 Jun (SM, PJL) was surprising. Arctic Terns have come ashore on LI most summers of the past decade, mostly at Cupsogue. This summer a few also visited Nickerson Beach and Breezy Point. The peak count was four (two first-summer, two second-summer) at Breezy Point 24 Jun (AB). Repeats make total numbers elusive, but they fell short of the totals of 2006, 2008, and especially 2013 (SM). About 415 Forster’s Terns bred in Hempstead Twp., Nassau, NY (JZ), their northeastern limit.

A second-summer Least Tern ventured to Lake Ontario at Braddock Bay 8 July (Jim Miles, Laurie Mattle), only the fourth Rochester area record. Although Least Terns nest on interior rivers, they do not breed on the Great Lakes. Coastal New York had about 3403 pairs at 61 sites. Biggest were the Fire Island Wilderness Area (444 pairs) and Mattituck Inlet, Southold (210 pairs), both Suffolk (KAJ). In New Jersey, 1143 adults were present at 17 sites, the largest being Stone Harbor Pt., Cape May, with 300+, followed by Holgate-North, Ocean, with 260 adults (CD, EH). In Delaware, Least Terns did not nest at Cape Henlopen for the first time since monitoring began (ADeR-W).

The Stony Brook team found a Bridled Tern on debris in Hudson Canyon, about 100 miles off Long Island, 19 July (MF, RH). Observations unrelated to hurricanes are rare. It was not a census year for Black Tern. Black Skimmers are reduced to two colonies in New York: Nickerson Beach, with about 552 individuals (JZ), and Arverne, Queens, with 100 on 4 and 28 July (Corey Finger). A total of 2330 adult Skimmers were counted at five New Jersey locations. As has been the case since 2010, 80% were at Seaview Harbor Marina, Longport, Atlantic, with about 2123 adults and 772 chicks (EH, CD). Although skimmers loaf in Delaware (e.g. 58, Bombay Hook, 11 Jun, LB), none seem to breed there.

Black Vultures, having reached New Jersey as breeders only in 1981, are now regular on the Niagara River at Lewiston, Niagara, NY and “expected” in the Champlain Valley in Essex, NY (Gary Chapin et al.).

New Jersey, with one lone pair of breeding Bald Eagles in 1973, the year after DDT was banned, now boasts 185 active nests plus nineteen territorial pairs. About a third of these failed in a cold wet spring, though 121 nests produced 172 young (KC). Delaware had 98 Bald Eagle chicks at 76 nests (ADeR-W). Cooper’s Hawks (unlike Sharp-shins) adapt to suburbia: Buffalo had one nest and Amherst, Erie, NY two (fide DS).

Two Snowy Owls lingered in Lyme Twp., Jefferson, NY through at least 6 Jun, although one was electrocuted by a powerline (CW, m. obs.). One on a Brooklyn rooftop 5 Jun (fide TWB) may have been the same as the young female caught in a Riker’s Island Prison courtyard on 1 July, and rehabilitated by the Wild Bird Fund (N.Y. Times, 3 July 2018).

Short-eared Owls have retreated to the region’s extreme north as breeders since about 1990. We learned of only one pair in Fort Drum and another at Ashland Flats WMA, Jefferson, NY (JBo).

New Jersey’s 38 active Peregrine Falcon nests produced 75 young. Although most Peregrines still use man-made structures, they increasingly find abandoned quarries, “a great sign” (KC). In 1972, none at all nested in the eastern United States.

Some measure of Warbling Vireo abundance was 43 in a 4.5-mile kayak circumnavigation of Howland Island on 9 Jun (JMcG, LSa); five pairs were in Central Park, NYC, 11 June (DA). A Philadelphia Vireo was outside the Adirondacks for a second year at Fort Drum 4 July (SM, PJL).

A mass of 2425 Bank Swallows, counted from a photo, rested on the ground at Hamlin Beach 8 July (Doug Daniels, DS). Red-breasted Nuthatches began turning up in the lowlands in late June, presaging a fall invasion—e.g. 3 in the Bronx Botanical Garden on 26 Jun (DA) and one at the Glenayre Farm, Burlington, NJ 24 Jun (Thierry Besancon). Sedge Wrens were most evident in the St. Lawrence River Valley, where 33 were reported, including 23 at Fort Drum on 8 July (fide JBo); elsewhere, scattered pairs could be found in appropriate wet grasslands across northern New York in Orleans, Genesee, and Cattaraugus, and in several upper Hudson River localities in Washington.

After a judge blocked the NYDEC’s cull of Double-crested Cormorant nests on Lake Ontario, their relentless spread resumed. Little Galloo had the most nests since 2011 (2769), and a record 3491 occupied the Saint Lawrence River Islands (JBo). They have bred in Buffalo Harbor since 1992 (750 on 2 Jun, GDu). New York Harbor hosted 2093 cormorant nests on seven islands (TWn), approximately twice as many as a decade ago.

Roseate Spoonbills exceeded their 2009 incursion. New Jersey, with only one previous record (1992), had four: Knowlton, Warren, from late May to 1 Jun (David Bernstein et al.), with a further observation at the Hackettstown Fish Hatchery 15 Jun (Susan Kadar); Brigantine 24 Jun (JA-C, m. obs.) to at least 27 July (Susan Dillard); and one over the Garden State Parkway at Rio Grande, Cape May, 2 July (Anne Harlan). New Jersey’s final Spoonbill, at Walkill 22+ July (Linda Scrima, et al.), also became New York’s second record (the first was in 1992) by crossing into Orange 29 July (RG, Matthew Zeitler, Rob Stone). In Delaware, a spoonbill was at Big Stone Beach, Kent, 12–13 Jun while another, perhaps the same, was at Ted Harvey 15 Jun (both LB). The only prior Delaware record dates from 2009.

New Jersey’s carefully monitored Piping Plovers declined for a second summer to 96 pairs, down from a peak 144 in 2003 and a long-term average of 117.  This despite productivity of 1.51 fledglings per active pair, well above the long-term average of 1.02. Federally managed lands (Gateway, Sandy Hook, and Brigantine), which now house 72% of the state’s Piping Plover population, were the most productive; municipal and state lands suffered “intense recreational disturbance.” The population has also shifted northward as some traditional southern sites (Avalon) are flooded. Predation caused most nest failures (18 of 34 cases), half by mammals, especially Red Fox, followed by American Mink and Opossum. Other significant predators included crows, gulls, and Great Horned Owls. “The future of Piping Plovers in New Jersey is uncertain” (EH, CD). Delaware, once down to a single pair, had sixteen pairs, four at Cape Henlopen and twelve at Fowler Beach, Sussex, that produced 36 fledglings (ADeR-W).

Piping Plovers are reestablishing a breeding population on eastern Lake Ontario. A pair successfully fledged 4 young at Sandy Island Beach SP, Oswego, NY (Alison Kocek), after failed attempts in 2015 and 2016. This follows success at Lakeview WMA, Jefferson, NY in 2015, the first since 1984. The LI population has risen to 390 pairs (KAJ).

Though Roseate Terns thrive on Great Gull, where about 2200 pairs constitute this species’ largest colony in this hemisphere and possibly in the world (JDiC), only one of the former alternative colonies remained, Gardiner’s Island, Suffolk, NY with ten pairs (KAJ). Breezy Point, where 11–15 gathered 23–24 Jun (Isaac Grant, AB), could become another nesting site.

Red-headed Woodpeckers’ spotty distribution defied generalization. Most New York records were from the Lake Ontario plain, with notable downstate pairs at Muscoot Farm, Westchester (AS), and Connetquot River SP, Suffolk (KF, Patrice Domeischel, et al.). They were thinly but widely distributed in about twenty places in lowland New Jersey, with a predilection for the southeastern Pine Barrens. In Delaware, aside from Milford Neck Wildlife Area, Kent, they were limited to four sites in southeastern Sussex.

Photos–Hudson-Delaware: Summer 2018
Hover or click on each image to read the caption. 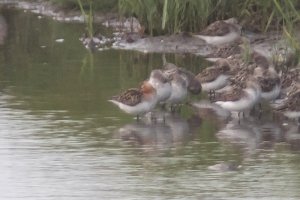 This Red-necked Stint’s remaining alternate plumage stood out in a crowd of drab peep at Edwin B. Forsythe NWR, Atlantic Co., NJ, on 23 July 2018, but the bird could not be found again. About a dozen have been confirmed in this region since the first, in Delaware, in 1984. Photo © Jesse Amesbury. 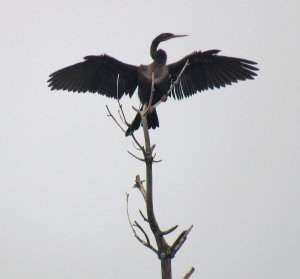 Anhingas had been found only twice before in New York when this immature turned up at Morningside Park, Fallsburg, Sullivan Co., on a windy, rainy 23 July 2018. Photo © John Haas.

Two states notched second records for Roseate Spoonbill when this bird visited Walkill NWR, which straddles Sussex Co., NJ, and Orange Co., NY. It was part of the largest ever northward incursion of these southern waders. Photographed on the New Jersey side on 22 July 2018. Photo © Linda Scrima. 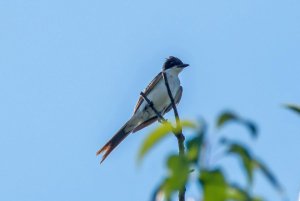 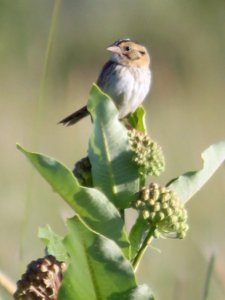 Henslow’s Sparrows have been reduced in this region to a few scattered sites in upstate New York. This bird was at Beatty Point, Monroe Co., NY 5 June–2 July 2018. Photo © Brad Carlson.