Black-bellied Whistling-Duck, a species that has been experiencing a population boom and attendant range expansion since the 1950s, has turned up in the region with increasing regularity, annually for the last decade. This season boasted sightings of the species in all three states in the region. In Lewes, Sussex Co, DE, two were reported on 2 Aug (Susan Gruver), and one on 11 Sep (Delaware Birdline). A flock of 17 appeared in Absecon, Atlantic Co, NJ 19 Aug (D. Kleinschmidt). Albany, NY, hosted a flock of seven on 31 Aug (Susan Beckhardt). A handful of reports came from Atlantic Co, NJ, in the vicinity of Edwin B. Forsythe Brigantine Unit, where two or three of the handsome ducks were seen 5–11 Sep (Amy Davis, Don Crawford, Josh Gant, Brandon Henry, Joel Marcinik, Maria Pacheco). The species appeared near Freeville, Tompkins Co, NY 6 Sep–1 Oct (Nanci McCraine, m. ob.), and elsewhere in the NY Finger Lakes Region, there were as many as four at Montezuma NWR, Seneca Co 9–11 Sep (Tim Lenz, Betty Beckham, Sandy Podulka, John Killiany, Jamey McDermott).

The fall’s earliest reports of Pink-footed Goose came from northern NY, at Old Fly Marsh Nature Preserve in Onondaga Co 15–21 Nov (Andrea Burke, m. ob.), and it or another was seen at Malone Memorial Recreation Park in Franklin Co 21–24 Nov (Janelle Hoh, m. ob.). Pink-footed Goose has appeared almost annually in the region since its first accepted record, from NY in 2007.

A Barnacle Goose appeared in the company of four apparent Barnacle × Canada hybrids in the Black Dirt region of Orange Co, NY 24–30 Nov (Bruce Nott, m. ob.), while another Barnacle was in the Allentown area, Monmouth Co, NJ 28–29 Nov (James Parris, m. ob.). The species has been annual in the region since its first accepted record, from NJ in 2002; the region’s previous reports were thought to pertain to escapees.

Trumpeter Swans made a good showing in the region near Lake Ontario, St. Lawrence River, and Montezuma NWR; away from this stronghold, a lone bird was at the Saranac River mouth, Clinton Co, NY 27 Sep (William Krueger), and a pair was a nice find in DE at Bombay Hook NWR 10 Nov (Rich Ziegler). Another pair returned to Assunpink WMA, Monmouth Co, NJ 25+ Nov (Trey Hendrix) for the eighth consecutive fall, this time with a juvenile in tow.

Eurasian Collared-Doves made brief appearances in NJ in Millburn, Essex Co 5 Aug (Brett Karley) and Cape May, Cape May Co 6 Aug (Tom Reed). Another frequenting Rome, Oneida Co, NY 31 Aug–5 Sep (Dennis and Dina Waters, m. ob.) may have been present for months prior; and in Sussex Co, DE, only two remained of the dwindling colony at Selbyville, where they were reported 27 Sep (Sharon Lynn, Jen Ottinger). Selbyville is the species’ only toehold in the region, although it has successfully colonized much of the rest of the U.S., as well as Mexico, the Caribbean, and southwestern Canada since the 1970s.

An abundance of western hummingbirds attended the region’s feeders this fall, possibly due to several mild winters in a row attracting returning strays, and maybe due to western wildfires forcing eastward migration rather than southward. A Black-chinned Hummingbird was an overdue DE first at Harbeson, Sussex Co 24 Oct–9 Nov, where it was banded and identified as a hatch-year female (Bob Edelen); another, an apparent hatch-year male, was photographed in Goshen, Cape May Co, NJ 8 Nov (Dustin Welch, J. Nemeth). No fewer than eight Selasphorus hummingbirds not identified to species were noted in NJ alone this fall. A Calliope Hummingbird made sporadic visits to a yard in Point Pleasant, Ocean Co, NJ, starting around 1 Nov and continuing through the period (Deb and Tom Dishon); another in Bear, New Castle Co 19–21 Nov (Mariano Mazal, Michael Moore) was DE’s 2nd.

It was another record-breaking year for DE’s Piping Plovers: 21 nesting pairs produced a total of 51 fledged young for an average of 2.4 fledglings per nest. This is the third consecutive year of all-time high counts for DE’s Department of Natural Resources and Environmental Control (DNREC)’s Piping Plover monitoring program (Shawn M. Garvin, DNREC).

A Little Stint at Edwin B. Forsythe Brigantine Unit, Atlantic Co 5–12 Sep (Yong Kong, m. ob.) was NJ’s 4th; the state’s three previous records were all from July. NJ’s first Wood Sandpiper was a crowd-pleaser for masked and distanced birders at Richard W. DeKorte Park, Bergen Co, 20–22 Sep (Milton Collins, m. ob.); the species has made previous appearances in both DE and NY, but there are only about a dozen total ABA records away from Alaska.

The season’s only reports of Pacific Loon came from Cape May Co, NJ, where two were seen from Cape May Point 10 Oct (Louise Zemaitis, Michael O’Brien, Tom Johnson), and another was tallied on the Avalon Seawatch 2 Nov (Tom Reed). The species is a casual fall and winter visitor in the region.

Two Swallow-tailed Kites were in the Kendall area, Monroe/Orleans counties, NY 9–16 Aug (Patricia Martin, m. ob.), and may have been present for a week prior; two more were seen at Sandy Hook, Monmouth Co, NJ 11 Aug (Chase Schiefer). Several reports of the species came from Cape May, Cape May Co, NJ 13 Aug (Greg Mandel, m. ob.) as well, and another was seen in the area 30 Aug (Bill Roache). Fall records are rarer than spring records for this species.

Counters at Franklin Mountain Hawkwatch in Oneonta, Otsego Co, NY noted a precipitous decline in Red-tailed Hawks this season, in what looks to be a downward trend for the species. There were 57% fewer redtails tallied this year there, a trend also noted at other hawk watches in the Northeast. Other species experiencing significant declines at the site were Osprey and Cooper’s Hawk (down 46% and 23%, respectively), while Broad-winged Hawks and Bald Eagle counts were up.

A Loggerhead Shrike was a good find at Fowler Beach Road, Sussex Co, DE 25 Sep (Bruce Peterjohn); the species is in steep decline in the East.

A Bell’s Vireo at Rehoboth, Sussex Co, 5 Oct (Peggy Clapp) was a perhaps overdue first for DE. NJ’s 3rd Yellow-green Vireo was banded in Cape May, Cape May Co 1 Oct (L. diBiccari, E. Chen, J. Tattoni, m. ob.); all three records come from Cape May Point SP and the adjacent South Cape May Meadows and have occurred since 2018, but almost certainly pertain to three different individuals. These are the only records from the region, and there are few out-of-range records away from Florida.

NY’s 2nd Painted Redstart was a gaudy one-day wonder at Floyd Bennett Field in Kings Co 18 Oct (Richard Payne, m. ob.). The state’s (and region’s) lone previous record is from Livingston Co in 1980, and there are only about a dozen records east of the Mississippi River.

Report processed by José Ramírez-Garofalo, 28 May 2021. 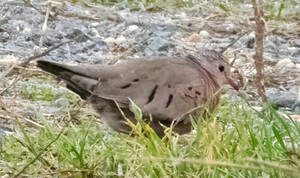 New Jersey’s fifth Common Ground Dove was hidden from view for most of its brief stay at Edwin B. Forsythe NWR’s Cedar Bonnet Island in Ocean Co on 11 Nov 2020. Photo © Amy Davis. 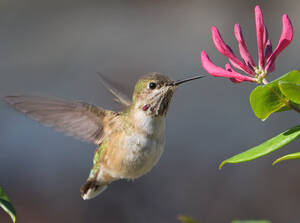 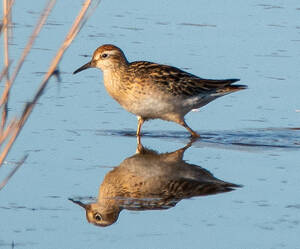 This Sharp-tailed Sandpiper, photographed at Bombay Hook NWR, Kent Co, on 8 Nov 2020, was Delaware’s third; the state’s previous records are from 1993 and 2002. Photo © Jeff Kietzmann. 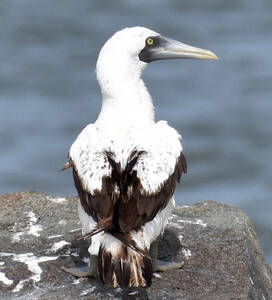 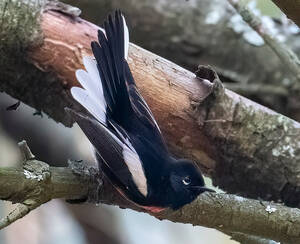