How to Know the Birds: No. 9, What Birders Want—Western Tanagers

How to Know the Birds: No. 9, What Birders Want—Western Tanagers

Across a large swath of the ABA Area, it has been a remarkable spring for seeing western tanagers. These radiant birds have been showing up all across the western Great Lakes region, where they don’t ordinarily occur. Birders at oases in the Desert Southwest have been reporting migrants in numbers considerably in excess of normal. And here in the Rocky Mountain region, where I live and where the western tanager is usually fairly common in spring, the species has been fantastically, ridiculously, off-the-charts abundant.

The reasons for this will be explored in detail in the months to come in regional ornithological publications and in the quarterly journal North American Birds, published by the American Birding Association. I’m looking forward to seeing the analysis, but that’s not what I’m about right now. No, I want to spend a bit of time reflecting on the human dimension of the “Great Western Tanager Fallout of 2019.”

The date was Sunday, May 19. We’d had a nice run of days with clear skies and warm temperatures—but everything had changed overnight. The temperature was in the mid-30s, a very fine mist was falling, and the cloud ceiling was lowering during the course of our bird walk. Toward the end of the morning’s ramble, we came upon a commotion of birds and humans. The birds were western tanagers, the humans were ordinary townsfolk. 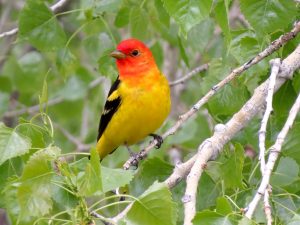 The city of Lafayette, Colorado, where the bird walk was held, has recently done something utterly simple and profoundly effective. It’s put out bird feeders—in as prominent a place as possible, at the entrance to Greenlee Wildlife Refuge, a heavily visited postage stamp preserve in the city. The attraction this morning was the plastic bowl filled with cranberry chutney—attractive to the eight or nine tanagers in the immediate vicinity, and powerfully attractive to the tanagers’ human admirers.

The adult male western tanager in spring is refulgent. Especially on dreary mornings with dense cloud cover. The bird looks like it could burst into flames. We joked that you should never stare directly at a male tanager, lest you incur permanent retinal damage. Whether you’re seeing a western tanager for the five hundredth time in your life, as was the case for several of us on the bird walk, or whether you’re seeing the species for the very first time, you are stopped in your tracks. Everything else in this life—getting back to work, heading off to church, driving the kids to soccer—can wait.

Suffice it to say, our bird walk didn’t end on time.

I went back that evening, and, right away, I could tell the tanagers were still there. The reason I knew is because of the humans. A group of folks with smartphones were stationed at the feeder, alternately gawking at the tanagers and scrolling and tapping at their screens. I had a pretty good idea as to what was on their minds. 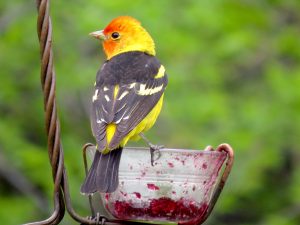 The city of Lafayette, Colorado, put out a cranberry chutney feeder a few weeks ago. The result?—Radiant tanagers flocked to the feeder, townsfolk flocked to the tanagers. Greenlee Wildlife Refuge, Lafayette, Boulder County, Colorado; May 19, 2019. Photo by © Ted Floyd.

The gawkers had pretty much figured out the ID without my input. But the confirmatory word was appreciated. They were very pleased. And so am I. Maybe one of them would go back home and start feeding tanagers. Maybe another will participate in next week’s free bird walk offered by the city. And, who knows, maybe one of them will someday become a major figure in birding or ornithology; they were all pretty young. If ever there was a spark bird, the western tanager is as good a candidate as any.

The weather continued atrocious for the next few days, highlighted by a tree-breaking, fence-crashing, epic spring snowstorm on Tuesday of that week. And so did the tanagers. The tanagers continued at the chutney feeder. Word had gotten out through Nextdoor and other social networking services. Even with the historically bad weather, people kept coming to see the tanagers.

The second thing is something Kenn Kaufman said in an interview in Birding magazine in 2007. The question was about how the efforts of “serious” birders can sometimes derail the cause of birding. Here’s how Kaufman responded: 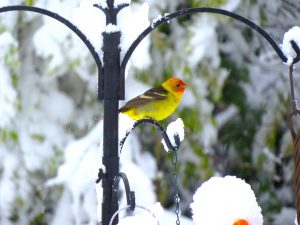 I should start by saying that birders in general are incredibly welcoming and helpful to newcomers. But sometimes our best intentions misfire. We’ll take a group of beginners out, and we’ll be obsessed with showing them something “good,” when they’d be thrilled with a good look at a flicker, or a jay, or a beautiful red-winged blackbird. We pass those by as unimportant and finally get the people zeroed in on a clay-colored sparrow or something, and they’re thinking “Huh?” And then they don’t go on a second field trip.

It’s funny, I can tell you all about clay-colored sparrows. I’ve analyzed their flight calls. I’ve pondered the matter of their status and distribution. I can tell you how they differ from the lookalike taverneri subspecies of the Brewer’s sparrow. But it hasn’t always been that way. I started out with flickers, and jays, and beautiful red-winged blackbirds. And I have a confession: In my earliest days, I just bypassed the sparrows altogether. I figured there’d be plenty of time to get around to them at some later point in my life. I was right about that. Was I ever.

The tanagers have moved on, but our memories of them are still with us. I’m glad we humans spent some time together staring in slack-jawed amazement at those feathered fireballs. I’m grateful to Kenn Kaufman for his wise counsel in the matter, and it’s gratifying that the city is carrying on with its “Lafayette Birds!” initiative. Most of all, I’m thankful for tanagers—and for the spirit of human receptivity that has to be one of the greatest things about our own species. 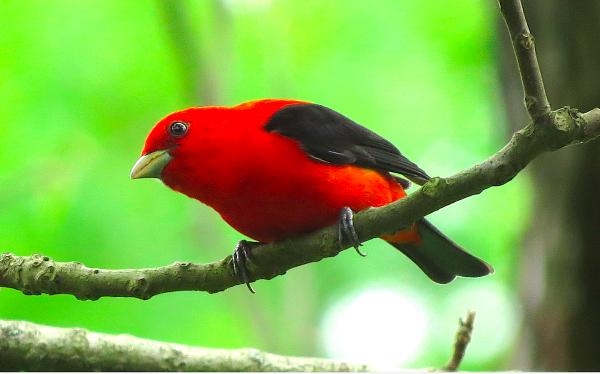 Tanagers…Yay! A week before the events described in this blog post, the author saw this Scarlet Tanager in Pittsburgh, Pennsylvania. A quick post to Facebook attracted lots of folks to the park where this tanager was found. Frick Park, Pittsburgh, Allegheny County, Pennsylvania; May 10, 2019. Photo by © Ted Floyd.

An audio version of this essay can be found on the latest episode of the American Birding Podcast.

Just bumped into this article while having a chat about tanagers with some internet friends, and really enjoyed this. Thank you for writing!

3 Tanger in mulberry tree in my yard 🧡🧡🧡
Monterey Park, Ca

Western Tanager came to my feeder Tuesday May 25th. Amazing for my area in Slave Lake Ab

First time seeing a western Tanager last week in SE Oregon. Along the Chewaucan River at the Marster Springs Campground. I was pretty excited as The Tanager has been my favorite bird since I first saw it in a book as a child.