How to Know the Birds: No. 8, Why Do Carolina Wrens Sound So Loud?

How to Know the Birds: No. 8, Why Do Carolina Wrens Sound So Loud?

I had every intention of sleeping in. I’d flown in late the night before and had nothing planned for the morning.

The Carolina wren had other plans. At 5:39 local time (that’s 3:39 body time), the bird went off. Then a pause of 6–7 seconds, and again. It went on and on like this, the worst part being those pauses. I can sleep through the steady din of robins and house sparrows (they were out there too), but the wren was like a slow motion car alarm.

I wouldn’t be getting back to sleep. And I got to wondering: Why do Carolina wrens and other birds sound so loud when I’m Back East?

A Carolina wren brays outside the bedroom window of the house in which the author grew up. Why do wrens and other birds always sound so loud Back East? Audio by © Ted Floyd.

Years ago, I’d hit upon altitude and humidity as possible culprits. I’ve lived for many years in the Denver metro area, where the air is famously high and dry. That makes a significant difference in diverse aspects of daily living—from hitting baseballs out of Coors Field to landing planes at DIA to cooking quinoa and brewing kombucha in our Boulder bungalows. Could it be the same with birdsong? After a fair bit of asking around, and even solving some physics equations, the best I can come up with is: It’s complicated.

The place where I was staying—the place with the Carolina wren—is fantastically complex from an acoustics standpoint. Homes and buildings, steep hillsides with tall trees dripping with overnight rain, basically all the infrastructure of a big city in the upper Ohio River valley. Yes, I was back in my hometown of Pittsburgh—for “spruce budworm warblers” and my mother’s 80th birthday party, not necessarily in that order. All those objects in the environment have significant effects on how humans and birds hear birdsong. Ornithologist Paul Handford, working in South America, has shown how whole populations of rufous-collared sparrows change their songs in response to ongoing habitat change: Subtract trees from the landscape (deforestation) or add them (recovery therefrom), and the sparrows change their songs. 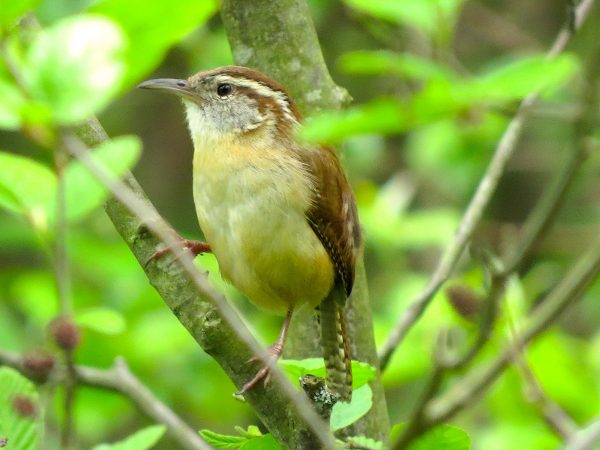 To what extent does a bird’s environment affect its loudness? This Carolina wren was singing in a humid, low-elevation landscape with dense vegetation and complex topography, plus an overnight rain and all the noise of a big city. Photo by © Ted Floyd.

I mentioned that I was in Pittsburgh, a noisy city. Birds sing louder in cities, a result that has been confirmed repeatedly both in Europe and North America. It’s loud on my parents’ street, a busy thoroughfare with heavy bus traffic. And many of the neighbors are undergrads at nearby universities; they’re louder, on the whole, than farmers and ranchers in eastern Colorado…

No question about it, the acoustic environment around my parents’ home is different: more air, more humidity, more trees, more ambient noise. But maybe that’s not it. Maybe the problem is me.

Birders love to snigger at The Family Circus, but I have to say, one of Bill Keane’s big Sunday spreads totally gets at what I’m talking about. I can’t find it online, but I remember it well: The father is back at his boyhood home after an absence of many years, and everything looks so small, so close. That’s how it is whenever I’m Back East, especially when I’m at the house where I grew up. Could it be the same with sounds?

The Carolina wren sings another song. This species typically sings one song over and over again, then switches to another for a while. In any event, it’s a loud bird—and one of the cheeriest participants in the dawn chorus across much of the eastern ABA Area. Audio by © Ted Floyd.

There’s a large and fascinating literature on the subjective experience of loudness. Suffice it to say, something gets out of whack in the short time it takes for a signal at the cochleae in our ears to get to the auditory cortex in our brains. Pitch and timbre have something to do with it, but so do personal experience and even cultural conditioning.

I’ll close by asking if other birders have noticed this effect. And if there are any acousticians out there, we’d all love to hear from you.

Ted, I’ve pondered the same question for a different species in another environment. Out here in coastal southern California, we look for “rock-pipers”, those shorebirds who specialize in working rocky shorelines, rather than beaches. Among them, Black Oystercatcher is prominent, and often first detected by its piercing vocalization. And that’s the point: I think the penetrating quality of that call is an adaptation to make themselves heard in the pounding roar of the surf on those rocks. If you ever find them on rocks near a more quiet beach, it always seems like they are shouting. Like the children who… Read more »

I was recently birding at the Valley Ford Wetlands in CA when I heard an exceedingly loud call from across the road – surprisingly it was a house wren in the buckwheat bushes. The tiny bird’s mouth was open so wide I could see way down it’s throat! Quite a wonderful display of behavior and so great to have it validated by your east coast observation!