I’ve got a thing for birds of the ocean. Especially the so-called tubenoses, in the order Procellariiformes. And especially the albatrosses, family Diomedidae. I grew up well inland, and, as a teen birder, I couldn’t even imagine something as wondrous as an albatross.

I yearned to go on a boat trip on the ocean, a “pelagic,” as birders say. I signed up for a trip that got weathered out. Then another. And yet another. I was cursed. But I eventually got on a boat, on a pelagic, on several of them, actually. Off the East Coast of the ABA Area, which has magnificent birds, but, still, no albatrosses.

It would be another few years before my first West Coast pelagic. And my first albatross! It was one of those incandescent moments in this birding life, like when I first locked eyes with a peregrine or laid eyes on the Amazon.

I grew up well inland, as I said, and, for 20+ years now, I’ve lived about as far inland in the ABA Area as possible. I love it here in Boulder County, Colorado, but I am, I must say, chronically albatross-deprived. So I jump at any and all opportunities for albatrosses. A college tour of the Bay Area last month? Why of course!

The pelagic out of Half Moon Bay, on a gray and foggy day in early autumn, was objectively “good.” Especially during the noon hour, when we saw a Hawaiian petrel, a Tennessee warbler, several Wilson’s storm-petrels, a flock of nearly 100 Buller’s shearwaters, and the usual slug of skuas and storm-petrels and such.

But the most thrilling moment of that brilliant noon hour was when spotter Malia Defelice spoke aloud those blessèd words: 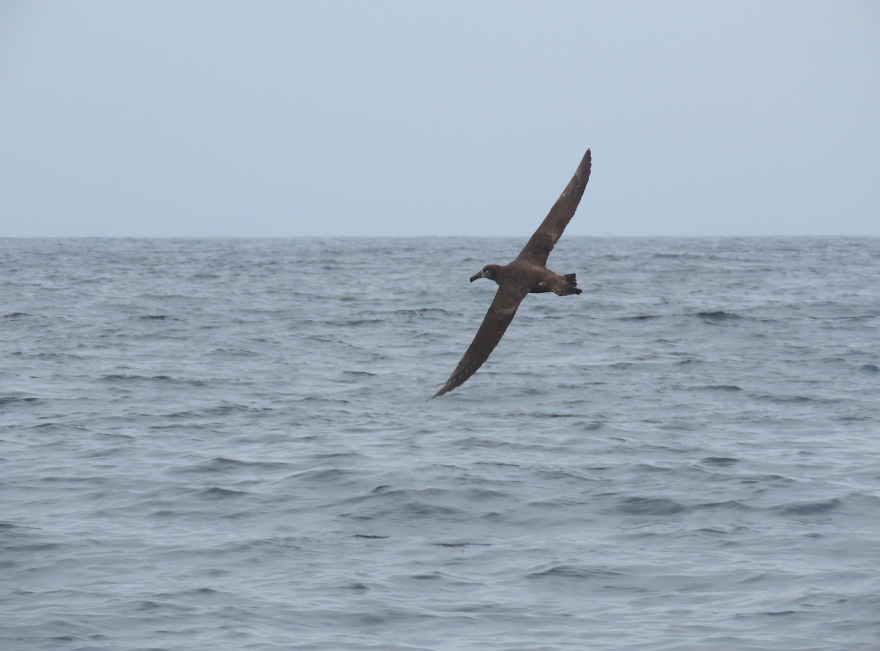 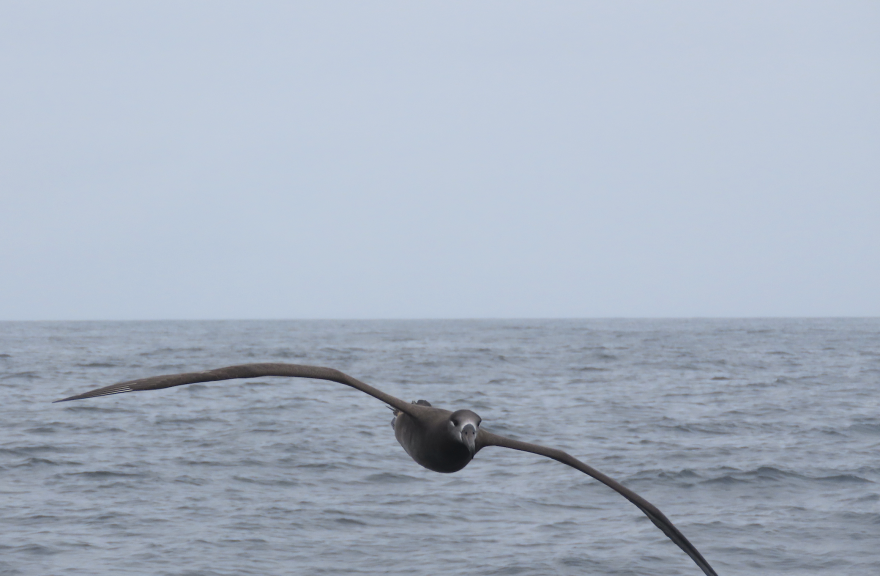 It’s landing right behind the boat! 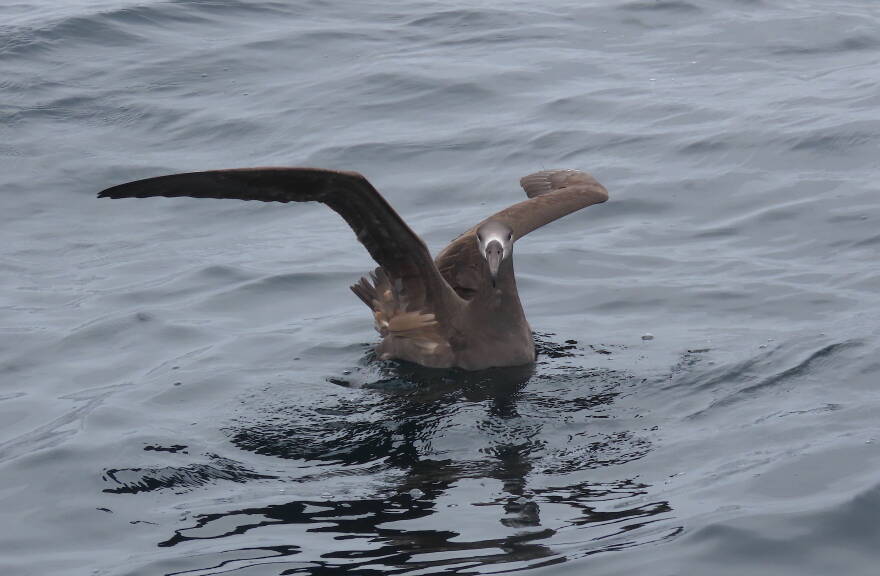 Just off the stern! 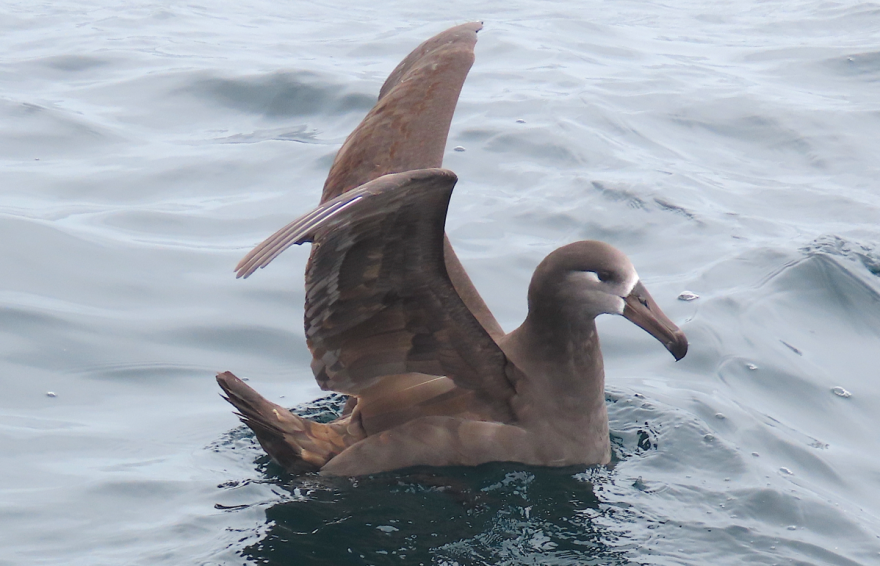 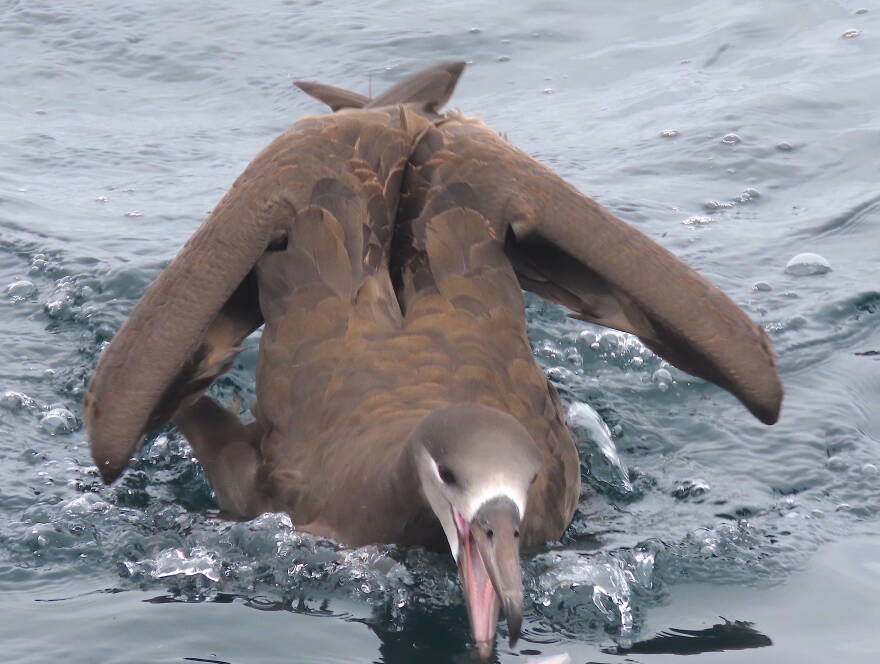 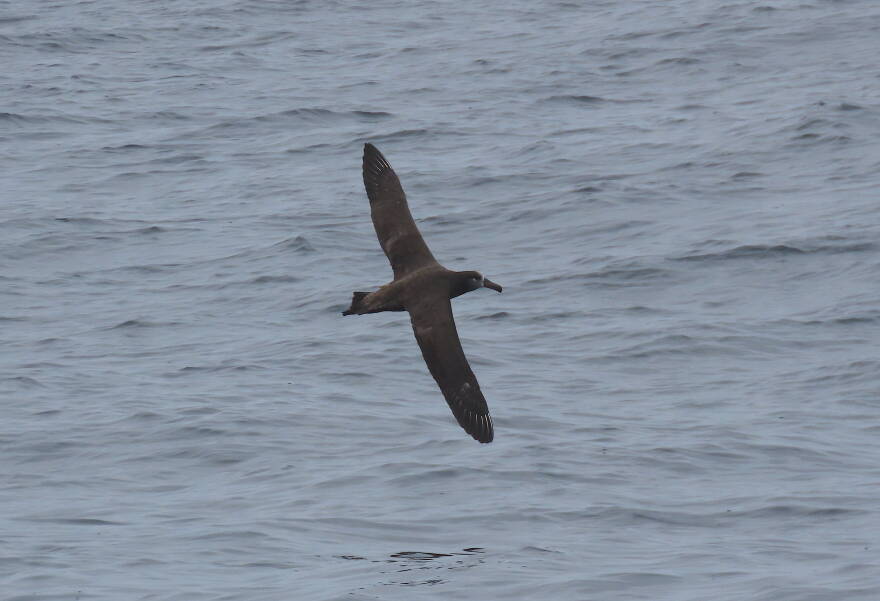 The bird disappeared behind a wave, and with a wave, or it so it seemed, was no more to be seen: 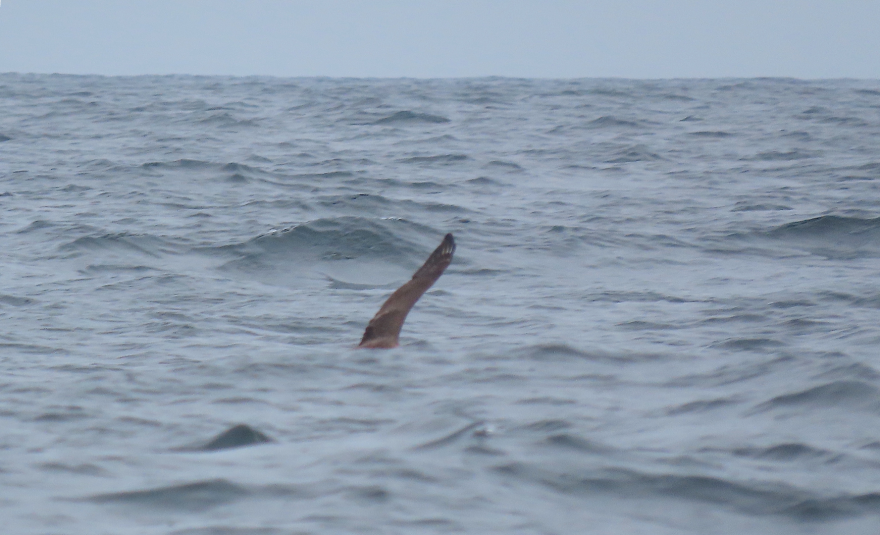 Photo by © Ted Floyd.
A couple hours—and a half dozen albatrosses later—as we were steaming back into port, a small group of us got to talking about the trip, and one person put it well. I’m paraphrasing, but her assessment went basically like this:

“Seeing a black-footed albatross on one of these trips isn’t uncommon. It would actually take some bad luck not to see one on one at this time of year. The bird was ‘just’ an albatross. But: It was an albatross! How many people in this world have ever seen a real, live albatross? We came from all over—you guys came from frickin’ Colorado—to get on a wobbly little boat and go out in the ocean. Imagine if you weren’t a birder. You would never do that. For what? To see a bird that, objectively speaking, isn’t even all that rare. It’s ‘just’ an albatross. And yet: IT’S AN ALBATROSS!”

That sentiment applies so well to so much of the birding experience. Practically every day, I see or hear something—cranes in the clear sky or sandpipers scampering about a mudflat or an owl hooting in an old tree in the park—that stops me in my tracks. I put down my phone; or pull off the highway; or get up from the desk and look out the window—because birds. Because when you’re a birder, you have constant access to wonder and amazement. It’s a state of mind, a transcendence. Every time we’re afield—even, often, when we’re “just there,” not even officially birding—something ordinary is become something extraordinary.

Thanks to Alvaro Jaramillo and Alvaro’s Adventures for the marvelous day at sea. For 20+ years, Alvaro has led field trips for the ABA, contributed great articles to Birding, mentored teen birders through the ABA’s Young Birder Programs, and much more.