How to Know the Birds: No. 7, What the Swainson’s Hawk Says

How to Know the Birds: No. 7, What the Swainson’s Hawk Says

Probably everybody knows what a hawk is. Hawks are big and fierce and raptorial; they have hooked beaks and gnarly talons. Like this: 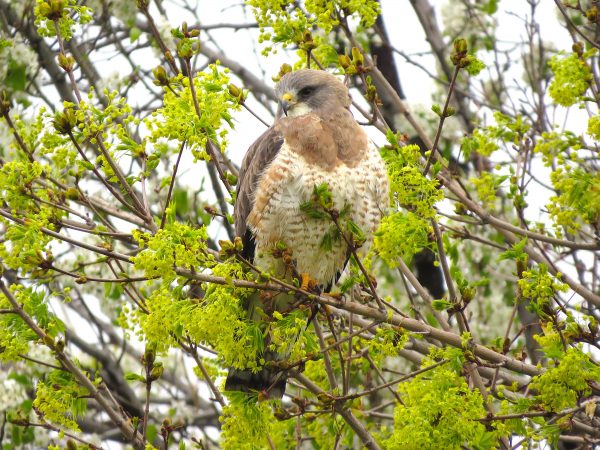 A chestnut-fronted hawk, just back from its South American wintering grounds, rests in a tree at the edge of a meadow in Colorado. Photo by © Ted Floyd.
Everything checks out. The bird is big. It’s got talons. The beak is hooked. This is decidedly a hawk of some sort, and a quick check of the bird book confirms that it is a particular species of hawk, the Swainson’s hawk, Buteo swainsoni. What does it mean when we say that the bird is a Swainson’s hawk, as opposed to a more general hawk?

The second part of the bird’s vernacular name, hawk, tells us we’re looking at something other than, say, a flamingo. That’s a start. And the bird’s genus, Buteo, narrows it down to a particular assemblage of hawks, sometimes called the buzzards, characterized by their broad wings, stocky body plans, and medium–large size. Then we get to the useless part of the bird’s name, Swainson’s in English, swainsoni in quasi-Latin. The latter denotes that the bird commemorates a DWEM (dead white European male) named Swainson, the former, illogically, that the bird somehow belongs to, or belonged to, that selfsame William John Swainson, F. R. S. (1789–1855).

A proposal that the American Ornithological Society discontinue the use of the possessive in patronymic bird names (2019-A 09-62) was recently defeated by the narrowest of margins, and a major new ornithology text, Rick Wright’s Peterson Reference Guide to Sparrows, dispenses with the apostrophe altogether. In Rick’s book, we read of Cassin sparrows and Henslow sparrows, of Abert towhees and Baird juncos. And if Rick ever gets around to writing a field guide to the birds of Ethiopia, he’ll include treatment of the Swainson sparrow, Passer swainsoni, a near-endemic to that bird-rich African nation. The apostrophe is a historical error, plain and simple, but the bigger problem, really, is with the existence of patronymics in the first place. I should say, the problems, plural. And two are chief among them.

First, and just to repeat myself, patronymics are utterly useless. That inarguable truth, which I’ve pondered easily ten thousand times in this birding life, became painfully clear to me, yet again, when I led a beginner bird walk this past Sunday afternoon. The birders and I saw two species of hawks on our bird walk—the descriptively named red-tailed hawk and the uselessly named Swainson’s hawk. We got to talking about alternative, and superior, names for this elegant, long-winged, chestnut-fronted, highly migratory buzzard. How about, well, chestnut-fronted hawk? Or long-winged hawk? Elegant hawk would do the trick quite nicely. True, other hawks fit the bill, but so it is with “red-tailed.” If it were up to me, this bird would be the migratory prairie hawk, or if under a strict character count, simply the migratory hawk.

The birders and I naturally reflected on the amazing, soul-stirring, almost unbelievable, semiannual migrations of this species of hawk. That elegant raptor, the one right in front of us, had just flown all the way from Argentina. Indeed, this particular individual has been returning to the exact same suburban park for up to 10 years. It has migrated well over 100,000 miles in its life, probably closer to 200,000 miles—more distant than the moon. Now that ought to be celebrated.

Just as there are other red-tailed hawks, one rightly notes, so there are other migratory ones. But this one, the one that flies round trip from Denver to south of Buenos Aires every year, deserves to be known as the migratory hawk. That’s a powerful and lovely bit of bird lore. It makes us stand up and take note. It causes us to reflect on the natural history and conservation of the species. As to Swainson’s hawk, meh.

I said there are two main problems with patronymic bird names. The second is that patronyms are—wait for it—patro-nyms. Literally, father names. Named for DWEMs, many of whom never saw the animal in life, some of whom never even set foot on the New World. I think of the participants on the Sunday afternoon bird walk, most of them women, some of them a fair bit younger than I. They were STEM (for science, technology, engineering, and mathematics) types, early in their careers. What does it say about our commitment to advancing the STEM agenda if we’re still in the business of beatifying antediluvian DWEMs? Heck, the practice is mildly insulting to me, an old white guy of European heritage. I can’t even begin to imagine how it’s received by the rest of the STEM community.

At the very least, could we start naming birds and other organisms after, let’s say, Rachel Carson? Oops, I’ve just dated myself. How about renaming the Swainson’s hawk for Lady Gaga or Alexandria Ocasio-Cortez? I’m serious. Those two are relevant and contemporary, agents of positive change in our culture. They are “influencers,” and then some, for the next generation of STEM leadership in ornithology and beyond.

I get that history is a component of ornithology. Spend a few minutes with me, and the conversation will turn to ornithological history. But not for its own sake. And certainly not to the exclusion of living history, being written right now in the hearts and minds and storybooks and scientific journal papers of contemporary practitioners of STEM. We go birding—and some of us even become ornithologists—because birds are real, because their fragile and amazing lives are accessible to us right now, and because we birders are active and engaged in bird study and bird appreciation at this very instant.

In this short clip, a migratory hawk is assaulted by a jay. How does this encounter speak to you? Does it say something about the 19th-century Old World zoologist William John Swainson (1789–1855)? Is there any value in immortalizing Swainson in the bird’s name? Is there any harm? Video by © Ted Floyd.