How to Know the Birds: No. 66, Birding in the Metaverse

How to Know the Birds: No. 66, Birding in the Metaverse

It was the spring equinox. The first day of spring, yes, but I’m talking the exact moment of the equinox, 11:33am EDT, the precise instant at which the sun crossed the celestial equator. If you were in Honolulu, toward the far southwestern corner of the ABA Area, the equinox was at 5:33am that day—they don’t do daylight saving time there. And if you were in St. John’s, at the eastern limit of the ABA Area, the equinox was at 1:03pm—they’re quirkily 1½ hours ahead of New Jersey and the rest of the U.S. East Coast.

Same difference. The sun doesn’t care whether you’re on EDT, HST, or NDT. It enters the celestial northern hemisphere, and, voilà, spring officially has sprung in the ABA Area and everywhere else north of the Earth’s equator.

At the moment of the equinox, we were enjoying this bird, the four of us: 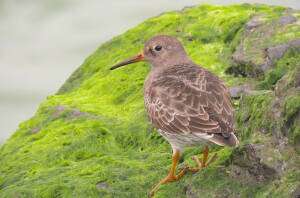 A purple sandpiper, Calidris maritima, poses at the tip of the jetty at Barnegat Light State Park, New Jersey, one of the most celebrated hotspots for finding this specialty of northern seacoasts. Photo by © Hannah Floyd.

It was a most satisfactory look at a most splendiferous bird, a lifer indeed for one member of our party. Let’s linger just a bit longer with this purple sandpiper on the famous jetty at Barnegat Light:

With its relatively long toes, relatively short legs, and low center of gravity, the purple sandpiper is
exquisitely adapted for adroitly maneuvering on seaweed-slickened sea rocks. Video by © Hannah Floyd.

Ah. The squeals of herring gulls. And the wind. And although you can’t “really” smell the briny and feel the fresh sea air, you sort of can: Something actually does go off in your olfactory and somatosensory cortices, respectively, after you click PLAY on the video. Watch as the sandpiper slips on the seaweed; if you feel just a bit weak in the knees at that, it’s because synesthetically charged synapses are firing in your parietal lobe, creating the sensation of losing your footing.

Getting the purple sandpiper required a bit of work. That’s how it is, oftentimes, with lifers. Here’s a partial reenactment, edited for length and clarity, of what went down:

Her [pointing out a passing bird]: “Great cormorant in flight!”

Her [acknowledging the finder]: “Mom spotted it first. Now if we only we could find those purple sandpipers…”

Me [distracted by something]: “Hold on, I want to ask George [Armistead] something…”

Her [cutting me off]: “Harlequin ducks! Listen! You can hear them!”

Me [straining to pick them out over the surf]: “OMG, I’ve never heard that sound in real life! I’ve read about it. The old mariners used to call them ‘sea mice’ for their squeaky utterances.”

Her [capering now along the sea rocks]: “We’re almost there!”

Me [doing the fretful parent thing]: “Slow down, you’re gonna fall; your brother’s already burned out our deductible for ER visits this year.”

Her [impatiently]: “I still don’t see them.”

Me [also impatiently]: “George said to go all the way to the extreme end of the jetty. And you need to search right at the water’s edge, where the rocks are splashed with surf.”

You get the picture. You’ve probably been there yourself. The mix of impatience and expectation and frustration and exhilaration. 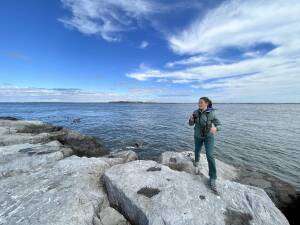 You already know what comes next. There’s a happy ending to this story. In case you didn’t catch it at the outset: 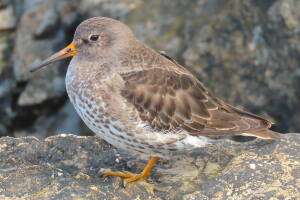 Despite initial worry that the bird might not show, it did. Did it ever! Photo by © Hannah Floyd.

We were headed back now, and I heard a bright tinkling in the cottonwood directly overhead. Wha?? A cottonwood on the jetty at Barnegat Light?? It was a plains cottonwood, Populus deltoides monilifera, the subspecies or variant of the western Great Plains. And the bird was an American bushtit, a species never recorded in New Jersey and, in fact, never recorded in the ABA Area east of Texas.

The bushtit, a male, dropped down into a shrub in front of me, and I got a quick pic: 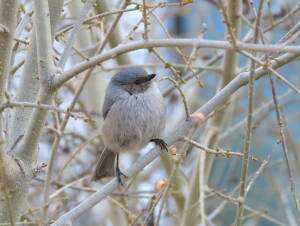 A bushtit pauses in a Colorado yard. Moments earlier, the author had been reveling in purple sandpipers on the Jersey shore. Photo by © Ted Floyd.

Meanwhile, George had gone his own way. He would soon be trekking for snow leopards! It was getting on toward 10pm IST (India Standard Time), and it was time to call it a night.

The whole thing had been an exemplary “birder’s dream.” I bet you’ve had one yourself: You are in the midst of a vivid, and seemingly long-duration, encounter with a purple sandpiper in New Jersey; but then you’re studying a bushtit in a suburban neighborhood in Colorado; and, next thing you know, it’s snow leopard trekking in the Himalayas.

Except it wasn’t a dream. It was all IRL, “in real life.” I have strived for surgical precision, absolutely literalness, in my reportage, and I believe it all checks out:

Reality Is Not What It Seems, a point we’ve explored together previously in “How to Know the Birds.” And it’s one we’re going to continue to explore together. To be clear, this isn’t the holodeck in Star Trek. It’s not make-believe, either, although daydreaming and other dissociative mental states are central to the experience of being human. And it certainly isn’t a dream, despite the phantasmagoric progression from sandpiper to bushtit to snow leopard.

Everything I’ve related happened IRL. I acknowledge that I was, corporeally speaking, in Colorado when it all went down. But I absolutely will not yield on the following: It was the most intense, the most visceral, the most up-close-and-personal experience I’ve ever had with a purple sandpiper: The build-up. The chase. The worry. The slipping and sliding—ours and the sandpiper’s. Hearing the squealing seagulls and squeaking Harley’s. 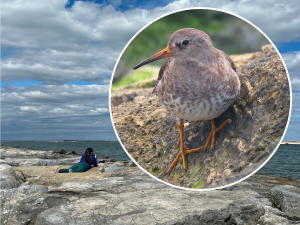 Enjoying purple sandpipers with Hannah, Kei, and George was a thrill for the author. Photo by © Kei Sochi, inset by © Hannah Floyd.

I got an assist from technology, of course, just as I do from eyeglasses and binoculars, from cars and planes, from the ingenious breakthroughs of painting and writing. I’m not gonna let some ignoramus caveperson ancestor of mine tell me it’s not “really” birding if I do it with convex lenses, internal combustion engines, and glyphs and likenesses printed in books called field guides. Making the leap to enjoying birding in real time with a smartphone? It’s a change, sure, but no more so than—not nearly as much, I would say, as—gazing through binoculars, jetting across the continent, or transforming human thought into squiggles and other symbols in objects called books.

It was intense, I just said, and visceral. More than anything, though, it was real. “Watch this space,” as they say. We’re arriving, in fits and starts, yet inevitably, at a substantially revised conception of the natural world—and our place in it. Reality Is Not What It Seems. Resist that truth if you wish. It doesn’t matter. It’s real, it’s all real.

I dunno. Can I put the cormorants, sandpipers, H-ducks, or bushtits on a checklist if I’m viewing someone else’s stream? I’d never submit an Incidental for birds I see watching golf on TV; what’s the difference?
Are travelling and reading actual birding, or are they things you do in preparation for birding?

Hi Ted Can you remind me or direct me to a pertinent article explaining why ABA is not capitalizing bird names? Thanks, Sally

Hey, Sally. Nice to hear from you. Capitalizing bird names is still “official” ABA policy. For example, in our magazines and checklists. We’re a little more lenient about such matters on social media.