We were on foot, the two of us, and we had a ways to go. The plan was to reach the marine preserve at low tide. We picked up the pace, trying in vain to avoid encounters with the unavoidable coast cholla which proliferates here. It was a pleasant afternoon, mostly sunny with just a bit of a sea breeze. The temp was around 70 degrees Fahrenheit.

Two weeks earlier, we had likewise been on a quest. Everyone in our group of 15 wanted to see a porcupine. We walked quickly, not for fear of missing our erethizontid quarry, but because we were cold. The temp at the outing’s start was 0 degrees Fahrenheit, and, if anything, it was even colder, down here in the draw.

Cabrillo National Monument, San Diego County, California, vs. “The Black Hole,” Baca County, Colorado, in February. About as different as can be. 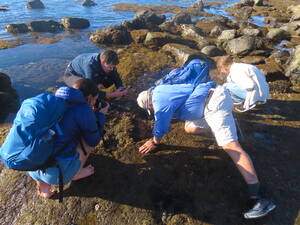 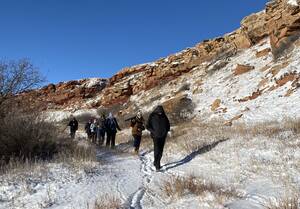 Some birds on the hike down to the tidepools: wrentits singing in the chaparral, a California thrasher, even a California gnatcatcher working one of the Torrey pines; brown pelicans and western gulls overhead, and, as we approached the tidepools, Brandt’s cormorants and a spotted sandpiper. You don’t find that stuff in Colorado in February, and, for the most part, you don’t find those birds in Colorado, ever.

Speaking of Colorado, some birds in the canyonlands: mountain bluebirds on VisMig and a couple of eastern bluebirds; a northbound golden eagle and a couple of sage thrashers, probably early migrants; and resident Woodhouse’s scrub-jays and canyon wrens. All those birds would be unlikely to essentially impossible at Cabrillo in February.

The respective experiences of February birding in southern coastal California and in the canyonlands of southeastern Colorado are indeed quite different, but there are some commonalities. For example, the common ravens. They were frequent sights, and sounds, both around the tidepools and amid the snowy rimrocks. Also, the brown towhees.

The brown towhee, Pipilo fuscus, is highly characteristic of coastal districts in California and lonely badlands in southeastern Colorado. Like the ravens overhead, the towhees down in the cholla and yucca . . . Wait . . . What? What’s he talking about? What, pray tell, is a brown towhee, P. fuscus?

It was the name given the population of organisms today known as the canyon towhee, Melozone fusca, and the California towhee, M. crissalis. In 1989, the American Ornithological Society, then known as the American Ornithologists’ Union, “split” the brown towhee into two species, subsequently transferring them to the genus Melozone and, in the process, reassigning their gender. The split was back in the 20th century, well over 30 years ago. Most of us weren’t birders back then, and many of us weren’t even born yet. The rest of us, decidedly in the minority, don’t give a lot of thought, anymore, to the erstwhile brown towhee. 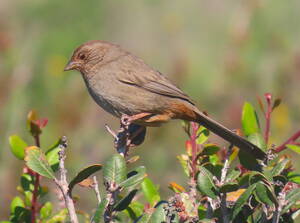 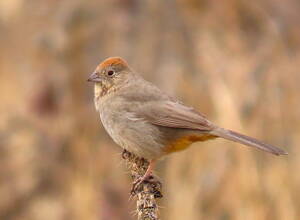 These sparrows were photographed a couple weeks apart in southern coastal California (left) and southeastern Colorado (right). Today they are known as the California towhee and the Canyon towhee, respectively, but they were formerly treated as a single species, the brown towhee. Photos by © Hannah Floyd.

That’s all well and good, but I’m also struck by how the change in status, from one species to two, affects our broader connections with the natural world. I’m old enough, and I’ve been birding long enough, that I’ve still got some brown towhee on the brain. Sure, I know the differences in plumage and in song between the California and canyon populations of the brown towhee, but there’s nevertheless a connection there for me. I see or hear a brown towhee in coastal California, and I can’t help but smile at the thought of one in the frigid canyon country of Colorado. Compare that with the perspective of my companion for both excursions. She was born in 2004. Sure, she can read up on the split, from 15 years before her birth (chances are, she has), but she never lived the brown the towhee the way I have.

Names matter. Status matters. Shifting baselines powerfully influence how we engage birds and nature. And, by the way, shifting baselines aren’t necessarily a bad thing. The post-split view of the brown towhee is, all things considered, superior to the pre-split view, at least in terms of biological realism. But the broader point stands: What we call a thing, and how, or whether at all, we categorize it, is not without consequences.

Which brings me back to the matter of the ravens.

To be clear, the raven is one of the great animals in the history of life on Earth. But what does that even mean, raven? I wrote common raven, above, implying the species, Corvus corax, which goes by that name. In distinction from, say, the Chihuahuan raven, C. cryptoleucus, which occurs in southeastern Colorado but never, so far as I am aware, in California.

That’s the official version, but the biological truth of the matter is messy. In a nutshell, common ravens in parts of California—along the coast and extending into the Mojave Desert—are peculiar. I’m going to apply imprecise language, but, basically, they are in the process of rejoining the rest of the common raven, through a process that might be termed “reverse speciation.” Formerly separated from a widespread “Holarctic clade” of ravens, California ravens have come back into contact with the genetic mother ship, their genes being assimilated with those of other common ravens. But the process isn’t complete, and, even if were, that wouldn’t somehow erase their respective evolutionary histories. Meanwhile, there is the matter of the Chihuahuan raven, which may have separated from common ravens in Colorado (and elsewhere in the Interior West) after the split between the common ravens in California and the rest of the common raven. The bottom line is that ravens in California have a rich evolutionary past, quite distinct from that of other ravens. 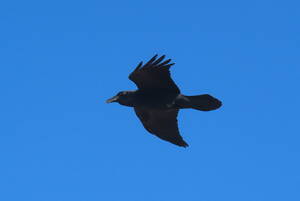 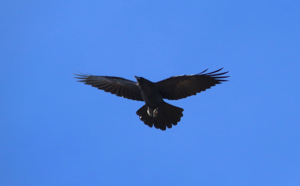 Go to Cabrillo National Monument in February (left), or to The Black Hole in February (right), and you will see the same thing: ravens in flight. But are they really same? And how does the answer to that question affect the experience of being there? Photos by © Ted Floyd.